THE WASHINGTON POST – Jewelz Tucker, a Northern California mother of four, had an epiphany as she sat with her husband filling out the form to get one of her sons screened for attention-deficit/hyperactivity disorder.

As she went through the checklist, she wondered aloud to her husband, “Is this me?”

“The world often thinks of ADHD as a young, male disorder,” Tucker said, but here she was: a 42-year-old woman who had been silently suffering from something her entire life she couldn’t quite put her finger on.

Millions of adults suffer from ADHD, and although those with a hyperactive-impulsive presentation are often diagnosed as children, those with predominantly inattentive symptoms – such as difficulty focussing, paying attention to details, lack of organisation, forgetfulness and trouble finishing tasks – can go undiagnosed, according to Cleveland Clinic. That can be troublesome for women and girls, whose inattentive symptoms might not stand out and who can better mask their symptoms than males.

Before becoming a mom, Tucker said, she was “crazy late for everything” and “chronically disorganised”, so much so she barely graduated from college. “There was so much shame and doubt. I was always wondering, am I intelligent? Am I normal? It really took a toll on my self-esteem.”

Tucker described the process of getting the neuropsychological evaluation that led to her diagnosis as “the best thing I’ve ever done for myself. It was like having a road map to my brain”. She said getting treatment with the appropriate medication and working with her therapist on ADHD life skills have been “life-changing”. 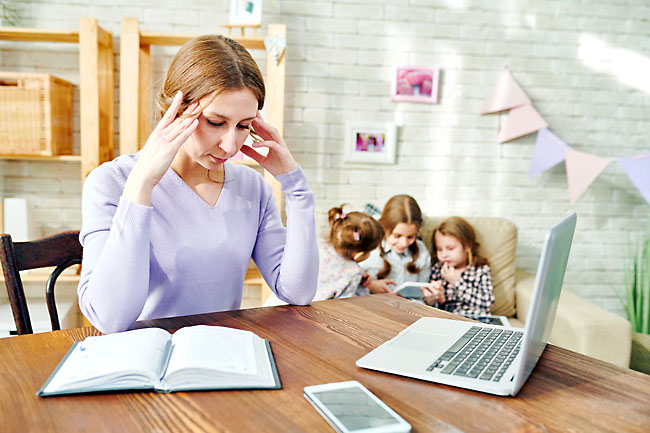 Even with treatment, coping with her ADHD symptoms is a struggle. As a mom, she’s “hyper-rigid” with routines and often anxious about being late, buffering in time for any given scenario that might occur.

“I know I can’t be 45 minutes late for school or a paediatrician appointment,” she explained. “It’s really hard. I’m not the fun-loving mom I want to be, but it’s the only way I can get things done.”

Other parents with ADHD talk about things such as persistent stacks of papers around the house, to-do lists created but never used, uncontrollable emotions and feelings of inadequacy, guilt and frustration because they can’t seem to “get it together”.

“The main thing we see with women being treated with ADHD is a sense of overwhelm,” said Sari Solden, a psychotherapist and author of Women With Attention Deficit Disorder.

“Women with ADHD often wonder how other women do it. Not being superwoman but being able to do things like stay organised, clean the house, or just moving from thought to action.”

Amber Gwinn, a 37-year-old mother of three from Colorado, knew she suffered from anxiety, but after having her now-two-year-old daughter and deciding to become a stay-at-home mom, she had days she felt so overwhelmed she could barely function. “I couldn’t figure out where to start with things. I’d have all these tabs open in my brain, it felt like my head was going to explode. Everything was so important and I had to do it all – and well. And if I didn’t, then I was failing.” After almost two decades of being misdiagnosed with a variety of depressive disorders, she was finally diagnosed last year with ADHD.

Gwinn described how her undiagnosed ADHD hit her the hardest with cycles of irritability, anger and yelling. “I used to have intense emotions, moments where I couldn’t take one more thing. The shame is just awful,” she said, “yelling at your kids. It just makes me sick to even think about it.”

Now with medication and counseling, she said, she’s been able to take back a sense of control. “I can stop, take a moment and clearly think before I react. I have so much more insight and patience now,” she said, “all because my brain is firing more like it’s supposed to”. Terry Matlen, a psychotherapist, ADHD coach and founder of ADDconsults.com, a resource for women living with ADHD, said that parenting with ADHD can present a major challenge for women, who are often the primary parents and household managers. “What I hear from a lot of moms with ADHD is that it’s easier to go to work than to be at home with their kids. That’s because you lose the structure of your day when you’re at home.”

To complicate things further, Matlen said, ADHD tends to run in families, meaning parents with ADHD are more likely to have children with ADHD.

Christian Garate, a 37-year-old single mother who lives in London, Ontario, was diagnosed with severe hyperactive/inattentive ADHD in her early 30s, after two of her three children were diagnosed.

Although she was home-schooling before the coronavirus pandemic, her family’s new everything-at-home lifestyle disrupted some of the outside structure that she and her children relied on to harness their energy in a productive direction. Previously they were able to tent-poll their days with field trips, museum visits and classes at a local community centre. When these activities came to a halt, their world fell apart. “My kids and I learn best by touching, seeing and doing,” she said.

“The lack of activity, along with the absence of any time away from the kids to recharge, has left me very close to losing it.”

Rachel Bloom, a Los Angeles psychotherapist who specialises in women’s mental health and neurodiversity, often uses a strategy with her ADHD clients that she refers to as mindful self-compassion. “Quieting the voice of a negative inner critic plays a huge role in bolstering the mindful awareness that improves focus and attention.”

If a woman suspects that she has ADHD, Matlen recommends that she get an evaluation from a medical professional with specific experience in adult ADHD. “It should include a very careful interview that reviews current and past difficulties, school performance, work history, social relationships and other psychiatric/medical conditions,” she said. “It takes someone experienced to really tease it out, otherwise you could end up with a diagnosis of depression.”

Depression and anxiety are common in women with ADHD. Mood disorders in general, and the reality that many providers lack an understanding of how ADHD affects women, can make it difficult to get an accurate diagnosis.

Solden’s message to women with ADHD is, “You’re going to need some support”, whether that means a therapist or coach, a support group or simply a helpful spouse.

Adults with ADHD are often able to benefit significantly from professional treatment, including a mix of counselling, coaching, medication and other tools designed to make life more manageable. But the unpredictable coverage and at times excessive costs of managing adult ADHD could still stand in the way of parents seeking care.

Matlen encourages people to start by reviewing their mental health benefits. “Sometimes insurance companies will cover evaluations, depending on what kind of clinician is offering the service. For example, they may accept a work-up from a neurologist but not a primary care physician, or vice versa.”

If you’re not working with insurance, many research universities such as UCLA will accept payments for psychological assessment and testing based on a sliding scale. The Attention Deficit Disorder Association also has a list of resources and online communities that support adults with ADHD.

Now Tucker is outspoken about living with ADHD for the sake of her two sons who also have the disorder. “I don’t want them to have the unconscious message that having ADHD is shameful,” she said. “Everyone is working on something, and that’s all ADHD is. A successful person is one who has figured out how their brain works and has learned how to interact with the world with the brain they have.”