THE WASHINGTON POST – Some swear that hanger, the intense anger or uncomfortable emotions that can come with being hungry, is real. Some people say it’s all in your head. It turns out, they both may be right.

What we eat, or don’t eat, affects our brains and emotions in ways researchers are just starting to understand. Several studies, including a small one from Britain, found that feeling hungry in your belly is associated with negative-feeling emotions. Research from the past decade increasingly shows that food can change emotional states, and influence behaviour and decision-making.

In 2018, the word “hangry” was even added to the Oxford English Dictionary, indicating its popular acceptance as a phenomenon. But what causes hanger, and why do some people get hangry and some don’t?

New science on hanger and the brain, which I explore in my new book Eat and Flourish shows that food and emotional well-being are inextricably entwined. Research is focussed mainly on two mechanisms that compose the body’s main communication system, hormones and neurons.

First, hormones send messages all over the body by travelling through your blood. Hanger may happen in part because hunger often coincides with a drop in glucose, which can create hormonal changes in the body that affect brain functioning. 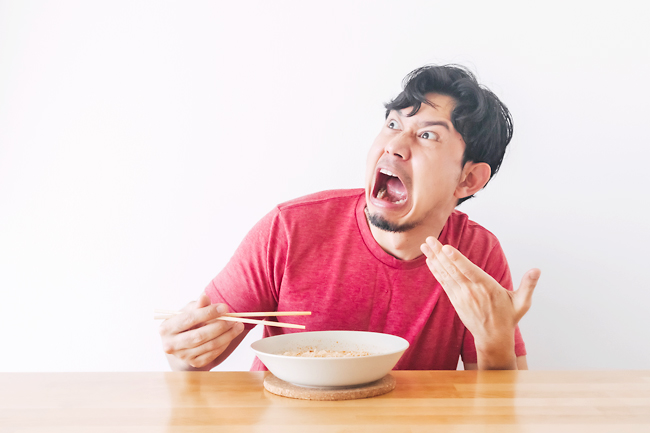 When blood glucose is low, you can raise it by eating something. When curbing hormonal hanger, it’s best to reach for something with protein, fibre and complex carbohydrates. Eating simple carbohydrates alone can send blood sugar soaring, which can make you jittery, followed by a blood sugar crash.

But even without food, a typically functioning body is smart enough to address low blood sugar on its own through hormones.

But that flood of cortisol and adrenaline in the bloodstream keeps us on high alert to threats. That high alertness, combined with being hungry, can result in the irritability frequently associated with hanger. Some bodies are more reactive than others to these hormones, so hanger can be extreme or not, depending on your specific physical reaction.

MAKING HUNGRY AND ANGRY VANISH AT THE SAME TIME

The second way that research shows hanger can happen is through neurons, the specialised cells all over your body that communicate with each other. The nervous system sends messages around your body faster than the blink of an eye, much faster than hormones.

Specifically, hanger researchers (yes, that’s a thing) identified neuron activity in the brain’s hypothalamus, an region that coordinates hunger and emotion, among other nervous system functions. Hunger activates these brain cells, known as AgRP neurons for the protein they express.

But researchers such as Amber Alhadeff at the Monell Chemical Senses Center in Philadelphia colloquially call these neurons, “hangry neurons”.

Alhadeff’s lab studies eating behaviour and how gut-brain communication influences what we eat. Her research shows that when lack of food activates AgRP neurons in mice, the neurons send a signal of hunger, which was not unexpected.

The surprise was that alongside hunger, the cells also signal a “negative valence” – an uncomfortable emotion usually associated with fear, anxiety and anger that the mice worked to avoid. Her work built on research published about these neurons in 2015.

It was different from hunger, but happened alongside it. And then, when the mouse ate, AgRP neurons immediately calmed down and simultaneously stopped sending both hunger and negativity signals.

But eating and the taste of food in itself can be intensely pleasurable – even when it’s just food pellets for mice. Alhadeff wanted to make sure the calming effect wasn’t just from a burst of flavour. She tested to see if injecting food directly into a mouse’s stomach had the same effect.

It did: Hungry and angry vanish at the same time when food is introduced into a body with active AgRP neurons, independent of taste.

HANGER WAS DOUBLY MOTIVATING FOR OUR ANCESTORS

Humans evolved to have a negative valence along with that feeling of hunger that is doubly motivating. Some people may still have a strong emotional motivation to find food, in addition to the hunger motivation, because of how their AgRP neurons react.

Alhadeff said calming hanger may have to do with our gut sense, as hangry neurons are just one of numerous connections between the gut and the brain.

Research on the gut-brain connection, also known as the “sixth sense”, has increased in recent years, and is helping to explain why we get satisfaction from particular foods and flavours. The gut has its own nervous system, called the enteric nervous system and known as “the second brain”, that senses food and nutrients even when they don’t go through the mouth.

As Alhadeff explained from her lab’s research, “we’ve discovered that you really need that gut signaling to have long, sustained reductions in AgRP activity”. So trying to address hanger with a Diet Coke is futile. “In the absence of that gut signalling, you really don’t shut off these hunger neurons,” she said.

Alhadeff hypothesised that hangry neurons are remnants of a time not so long ago when most humans had to forage for food, and we needed more than just hunger to motivate us to find something to eat. Most of us don’t forage for food any more. But this group of neurons still has a lasting impact.

Next time the hanger pangs come on, do yourself and everyone around you a favour – eat something.