THE WASHIGHTON POST – The Windsors have long ceased to be a fairy tale unless you mean the kind where the dragon devours all the princes and princesses and refuses to cough them back up.

The dragon’s identity has been open to debate (personal demons? inbreeding?), but the recent Oprah Winfrey confess-athon with Harry and Meghan – no need for those pesky titles anymore – suggests the culprit all along has been the hazy behemoth that Harry’s grandfather first dubbed “the Firm”.

It’s a title that twines usefully with the John Grisham novel, if only to suggest that the British monarchy is both organised and a crime – at least to the hopes, sensibilities and perhaps even the survivability of its occupants.

We have had time now to digest the testimony of Meghan and, before her, Diana. So let us turn to the Windsor princess of an earlier generation who, ravaged by alcohol and illness, struggled in her final hours against darkness.

As one of her friends would later report: “Princess Margaret was a depressed person and in the royal family you are not allowed to be depressed.” Replace “royal family” with “the Firm,” and everything becomes much clearer and, with it, the futility of even speaking of the Windsors anymore as individuals. They are assets in a multibillion-dollar corporation that carries on whether its assets wish to or not.

That is not the lesson that Andrew Morton – a royal watcher of long standing with a best-selling biography of Princess Diana to his credit – seeks to impart with his latest exercise in historical synthesis, Elizabeth & Margaret” (available on March 30). Morton would prefer to define the current queen and her late sister in terms comfortable to Us magazine: temperamental opposites who, despite their differences, came together for a higher purpose. 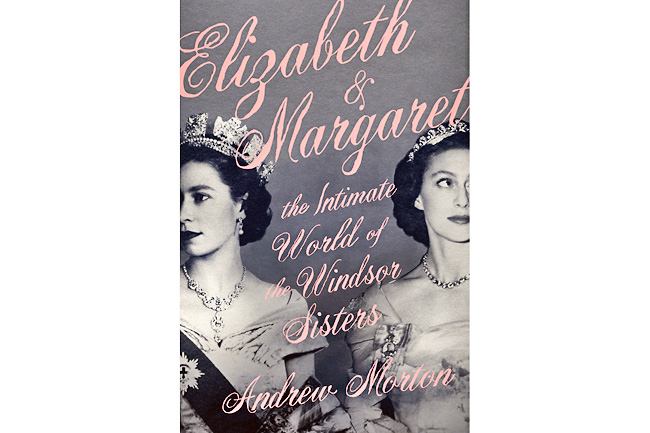 What that purpose was and whether it was worth the sacrifice of these two limited and sometimes desperate individuals is a question that seldom floats into view.

Born four years apart but raised practically in tandem, Lilibet and Margot, from an early age, wore the same clothes, imbibed roughly the same fund of knowledge from the same tutors and weathered the Blitz together in the crepuscular precincts of Windsor Castle, but their differences were apparent from the start and were shaped as if to validate the birth-order theory. Elizabeth, the elder, was obedient, shy, methodical, most at home in the country and most devoted to dogs and horses. Margaret was naughty, theatrical, funny, metropolitan, given to tantrums.

“Disobedience is my joy,” she once declared, and it is no small wonder that her Jan Brady querulousness should come to dominate Morton’s book.

Just over five feet tall, Margaret parlayed her blue eyes and ivory complexion and curvy figure – along with what photographer Cecil Beaton called her “twinkle” – into becoming Britain’s most desirable bachelorette. She partied, she sang, she danced, she flirted, she came home every morning “with the milk bottles”. She cut her gowns low.

Writes Morton, she was the first female royal to “do her courting in the new era of the paparazzi and the commercial long-distance lens.” Other firsts followed: the first king’s daughter in more than 450 years to marry a commoner – bohemian photographer Tony Armstrong-Jones – and, in the aftermath of that bitter, volcanic marriage, the first royal divorce since Henry VIII and Anne of Cleeves in 1540.

By then, her “scudding moods”, as Morton usefully describes them, had hardened into “rudeness and self-absorption”. Her hedonistic lifestyle, beamed out to the world from her beachfront estate on Mustique, and her open relationship with a younger man had turned the British populace against her.

She drank too much, spent too much, put on weight, hung out at communes, made spectacles. “What are we going to do,” the queen despaired, “about my sister’s guttersnipe life?”

Through it all, it seems, Margaret was trying to find a purpose beyond the accident of her birth. “I guess I’ll be second best to my grave,” she said.

The grave at last came and found her: a sequence of strokes before she died in 2002. The intimate private funeral was dwarfed in scale by the 200,000 citizen mourners who would file past her mother’s coffin a few weeks later.

Given the millions more who have watched the Netflix series The Crown, Morton’s narrative arc has the inescapable feeling of rehash.

From young Margaret’s stymied affair with a divorced equerry to her wacky evening with Lyndon Johnson to her halfhearted mid-life suicide attempt, Crown viewers will likely feel that they’ve heard this song before and that, in the superbly nuanced

What we need now, in any case, is not another celebrity biographer but an investigative journalist who will pry open the tiara casing around the Firm and expose its workings once and for all. Starting with the money – the USD10 million in diamonds, for instance, that Princess Elizabeth brought back from her 1947 tour of South Africa – and burrowing down finally to those deeply unglamorous palace officials who wind the clocks.

We may find that the most powerful monarchical figure of the past century was not a Windsor or a Mountbatten but Tommy Lascelles, the queen’s private secretary, who regularly informed his employer what she should be doing and who once stared down a suitor for Margaret’s hand and snarled, “You must be either mad or bad.”