LONDON (AP) – It doesn’t seem to matter which shirt Robert Lewandowski (AFP pic, below) is wearing – Bayern Munich just keeps getting the better of Barcelona either way.

Bayern extended its recent dominance over the Spanish giant with a 2-0 win in the Champions League early yesterday to show it can cope quite well without Lewandowski, who left to join Barcelona in the offseason.

It started out as a friendly homecoming as Lewandowski walked down the familiar steps of the Allianz Arena players’ tunnel before kickoff, hugging every one of his former teammates along the way.

Bayern’s players didn’t extend the same level of hospitality once the game started.

After Lewandowski missed several good chances to score in the first half, Lucas Hernández and Leroy Sané scored within a five-minute span in the second as Bayern took control of Group C with two wins in two games. 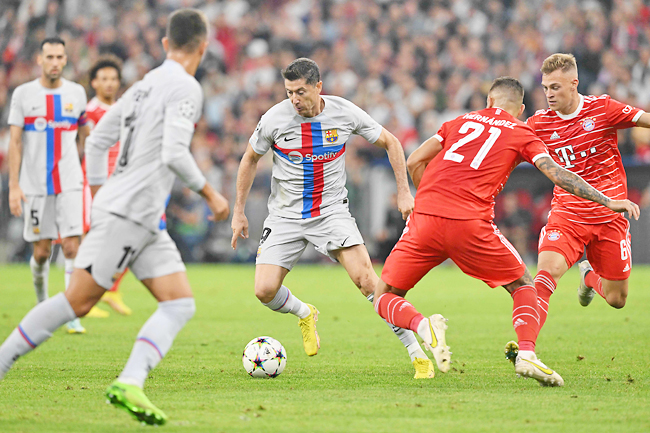 “Luck wasn’t on his side,” Bayern goalkeeper Manuel Neuer said about Lewandowski. “For Lewi, it’s an emotional game, here, a bit like coming home.”

The other group game between Marseille and Eintracht Frankfurt was marred by fan disturbances before kickoff, forcing riot police to intervene when opposing supporters launched flares and fireworks at each other.

Frankfurt won the game 1-0 thanks to a first-half goal from Jesper Lindstrom.

Liverpool needed an 89th-minute goal to get its first win of the European campaign.

Joel Matip headed home a corner to give last year’s runner-up a 2-1 home win over Ajax, bouncing back from a 4-1 loss to Napoli in the opening round. Napoli’s game at Rangers was postponed because of limited police resources in Scotland following the death of Queen Elizabeth II. A period of silence was held before Liverpool’s game.

After losing 3-0 to Bayern in both group meetings last season – and with the 8-2 drubbing in the 2020 quarterfinals still fresh in memory – there was hope among Barcelona fans that things would be different with Lewandowski on their side.

Instead it was just more of the same.

After the Poland striker was uncharacteristically wasteful in the first half, Hernandez did his best Lewandowski impression when the defender popped up at the near post to head home a corner in the 50th minute.

It was the kind of goal his former teammate scored so many of during his Bayern career, when he netted 344 in eight years.

Sane then pulled off a great solo effort for the second just four minutes later, bursting into the area and rolling a calm finish inside the far post.

In the other Group C game, Edin Džeko got the better of Viktoria Plzeň again.

Džeko had one goal and an assist as Inter Milan beat the Czech club 2-0 in the other Group C game.

The Bosnia international now has 10 goals in nine matches against Plzeň, and nine in the last six.

Liverpool got the win it so badly needed, but it was another performance that highlighted that Jurgen Klopp’s team is no longer the high-scoring machine it once was.

Liverpool struggled to convert its possession into goals in the second half and then needed the aid of goal-line technology to show that Matip’s late header crossed the line before cleared by a defender.

“Coming back from the horror show in Naples, it was important we showed a reaction,” Liverpool defender Virgil van Dijk said.

Mohamed Salah had earlier ended his run of seven Champions League games without a goal by putting the team ahead in the 17th, but Mohammed Kudus equalised when he created space in the area before smashing an unstoppable shot in off the underside of the crossbar in the 27th.

Klopp had urged Liverpool fans to show respect during the tribute to the queen, who died last week at the age of 96, after some of the club’s supporters booed the national anthem ahead of the FA Cup final last season. And the period of silence was respectfully observed, except for a few random shouts that were quickly hushed.

Tottenham had not lost a game in any competition this season before a pair of Sporting substitutes ended that unbeaten run.

Paulinho glanced in a header from a corner in the 90th minute and Arthur Gomes added the second in the third minute of stoppage time when he cut in from the left wing, darted between two Tottenham defenders and shot between the legs of goalkeeper Hugo Lloris.

In Marseille, Lindstrøm took advantage of a defensive error in the 43rd minute to score the winner for Frankfurt. Tottenham and Frankfurt have three points, with Marseille last on zero.

Group B is throwing up some surprising results so far, with Club Brugge atop the standings after routing Porto 4-0 away for its second straight win.

Forward Ferran Jutgla had a goal and an assist for Brugge, which saw four different players score.

It was Porto’s fourth straight loss in the Champions League going back to last season.

Struggling Bayer Leverkusen upset Atlético Madrid 2-0 for just its second win of the season after six defeats in eight games across all competitions. Robert Andrich and Moussa Diaby scored late for the German team.