MORADABAD, INDIA (AFP) – People in India’s most populous state Uttar Pradesh are fighting not just a raging pandemic but also a prickly Hindu nationalist local government that many say is in denial.

The state authorities, headed by a monk touted by some as a successor to Prime Minister Narendra Modi, insist there are no shortages and take a dim view of those “spreading fear”.

But the virus is clearly wreaking havoc as it spreads beyond big cities into the towns and villages not only of Uttar Pradesh, home to 240 million people, but elsewhere in India’s colossal hinterland.

Brijesh Pandey spends hours every day in the hot sun jostling with others for medical oxygen for his brother-in-law, who is now at home struggling to breathe.

Even though his relative clearly needs hospital treatment, he was unable to get a bed because of government red tape.

“We could only get a rapid antigen test done which is not accepted by hospitals for admission,” Panday told AFP as he waited outside a oxygen cylinder filling station in Moradabad district. “They are demanding an RT-PCR (test), and that is not available,” he said. 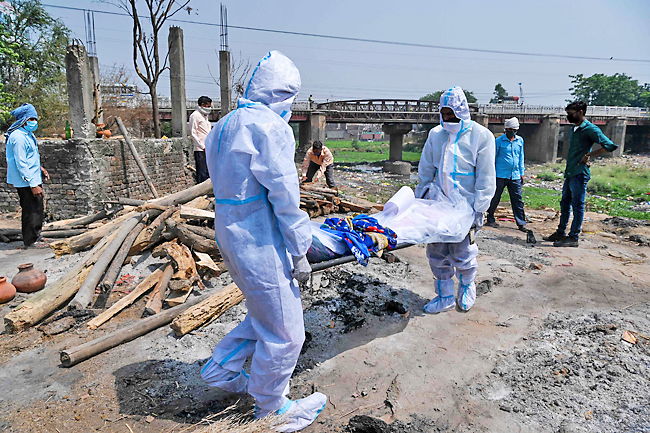 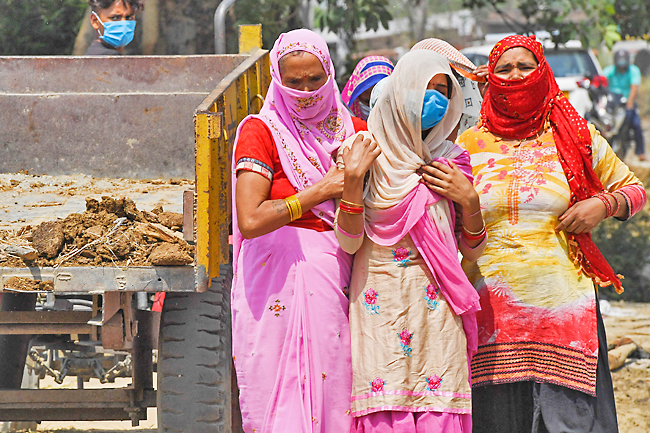 The 42-year-old said the family spent an astronomical USD545 to arrange an empty oxygen cylinder.

“The government says that there is ample supply of medicines and oxygen. But look how hundreds of desperate people are struggling to save their brothers, sisters and parents,” he said.

Police are on guard at the filling station, allowing only those with doctor’ prescriptions to get oxygen. The aim, authorities say, is to stop black marketeers.

“But we know many people are unable to get tested and are sick. But they can’t get oxygen,” said manager RK Yadav.

A regional court on Wednesday said that deaths in Uttar Pradesh due to oxygen shortages were “criminal acts and not less than a genocide”.

But complaining can land ordinary people in trouble under chief minister Yogi Adityanath, 48.

Last week the firebrand monk declared that those making “false” claims about shortages would be prosecuted and their properties seized.

At least two people and a hospital have been charged by police for “spreading rumours and fear”. One was arrested for appealing on Twitter for oxygen.

Uttar Pradesh’s official death toll is 14,500, about 6,000 of them since late March. But like elsewhere many experts suspect this is a major underestimate.

In the state capital Lucknow, the official death toll for April is 830. But two crematoriums say they handled more than 1,900 bodies while 500 others were buried in the Muslim graveyard.

Vivek Awasthi, founder of the non-profit Uttar Pradesh Voluntary Health Association, told AFP that villagers were sometimes treating the virus like a common cold and not taking proper precautions to stop it spreading.

Their nearest hospital is also often far away.

Ramchandra Nirmal, 49, who works as a security guard in Mumbai said that people back in his village in Uttar Pradesh could travel to small nearby clinics.

“But if you want to get oxygen you have to go to a hospital which is around 110 kilometres away,” Nirmal told AFP.

Many have blamed the spread on migrant workers returning from cities and on pilgrims who attended the enormous – and largely mask-free – recent Hindu festival Kumbh Mela.

Another factor is recent village-level elections across Uttar Pradesh in which millions of people voted even as the pandemic raged.

Pavan Singh said his 42-year-old brother, a science teacher, contracted the virus and died after working as one of thousands of election officials.

Teacher unions have said that more than 700 members have died in recent weeks after being involved in the process.

“He was admitted to three hospitals in a span of a week because some of them were running out of medicines and oxygen,” Singh told AFP.

“My brother would be alive if the government had used some sense,” he said.

Singh’s anger was shared by others gathered at the same makeshift crematorium on the banks of the Gagan river to perform last rites.

“The government is lying that there is no crisis,” said Sanjeev Yadav, whose sister-in-law died at home.

“These burning pyres prove that there is a crisis and the government is just trying to cover-up.”