Ball in Serena’s court at Wimbledon with rivals’ fitness doubts

LONDON (AFP) – Serena Williams turns 40 on September 26 and the arrival of that landmark birthday will be all the sweeter if she has at last equalled Margaret Court’s all-time record of 24 Grand Slam singles titles.

The tennis legend could even hold the record outright if she wins both Wimbledon and the United States (US) Open but despite holding her own in the top 10, there is a fear that age is impacting on her powers.

A fourth round loss at the French Open to Kazakh 21st seed Elena Rybakina reflected this although clay would be her least preferred surface despite three Roland Garros titles.

However, her chances of an eighth Wimbledon crown have improved with the withdrawal of world number two Naomi Osaka, who is taking time out of the game after revealing she has been battling anxiety and depression.

There are also fitness doubts over Australia’s world number one Ashleigh Barty and third-ranked Simona Halep, who denied Williams the record-equalling Slam at Wimbledon two years ago.

That was one of four Grand Slam finals Williams has played since she drew within one title of the controversial Court’s record at the 2017 Australian Open.

Fellow American tennis legend Chris Evert believes Williams is still capable of winning at Wimbledon where she has been the losing finalist on her last two visits.

“Like Roger Federer I would give Serena a better chance at Wimbledon because the grass is perfect for her game,” Evert told Eurosport prior to the French Open. “On the grass, if Serena is fit and that serve is working then that’s half of the match right there. She has that experience and flexibility.”

Evert, though, concedes that like any great champion who appears vulnerable all her opponents suddenly entertain hopes of beating her.

“The players are better now than they were two years ago and they are not intimidated,” said the 66-year-old, 18-time Grand Slam singles champion. “They all feel they have a chance against Serena.” 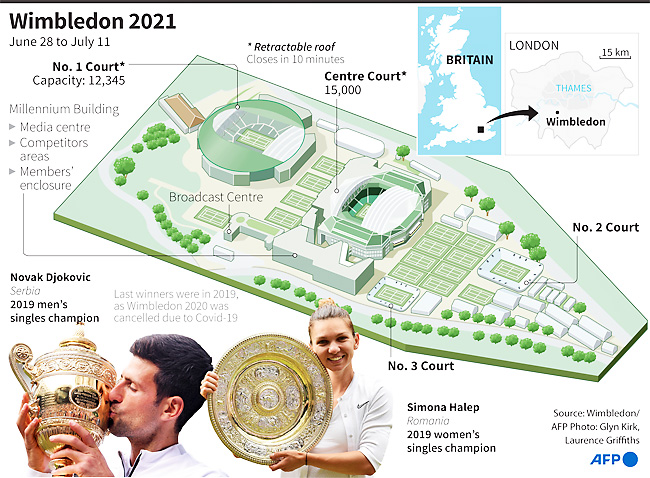