There are roughly 39 women among every 100 employed persons in Brunei Darussalam, according to a recent report jointly released by United Nations (UN) Women and this year’s ASEAN Chair, Cambodia.

With the exception of Laos and the Philippines, women remain underrepresented in management in all countries.

The share of women managers in Southeast Asia has only increased by two percentage points in the past two decades (39 per cent in 2000 compared to 41 per cent in 2020).

As many of the positions occupied by women are lower management jobs, women’s representation in middle and senior management is even lower, at 26 per cent. Evidence shows that the presence of women in corporate leadership roles may improve the performance of firms. Breaking the glass ceiling is expected to enable women to gain access to higher wages and greater agency to shape decisions that have important economic, environmental and social impacts for the ASEAN region as a whole. 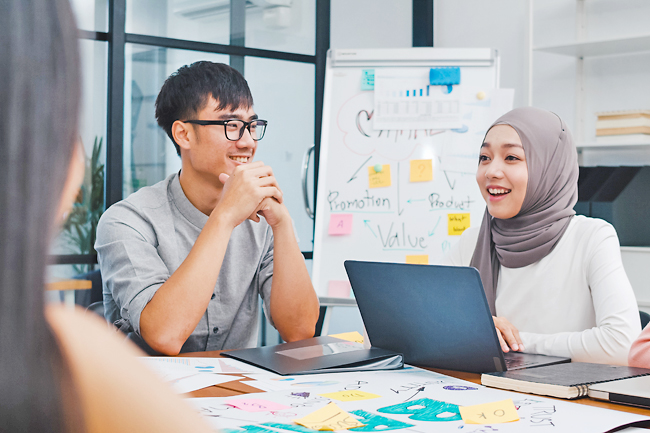 The report also said gender equality and women’s empowerment are central to the 2030 Agenda for Sustainable Development and the ASEAN Community Vision 2025.

They are also key to fostering a more sustainable and inclusive region. Providing women with equal access to decision-making power and leadership not only supports their well-being, but also enables their contribution towards regional progress and inclusiveness.

Micro, small and medium-sized enterprises (MSMEs) account for a large portion of business establishments across the ASEAN region.

Many of these businesses are owned or operated by women, who are helping to shape the economy of the region and its impacts on human development, well-being and the environment. As the COVID-19 pandemic has shown, women and men have been affected differently, but women have been less likely than men to contribute to the design of response and recovery policies. This is because, as statistics show, women continue to face many structural challenges that limit their equal participation in policymaking and decision-making.

In the ASEAN region, there is increasing recognition of the role of women as leaders and agents of change. However, more efforts are still required to promote their roles in accelerating productivity, enhancing ecosystem conservation and creating more sustainable and inclusive development.

According to the report, as ASEAN leaders come together to respond to the COVID-19 crisis, concrete steps could be taken to formulate more inclusive solutions. Placing women’s participation and leadership at the heart of COVID-19 response and recovery can turn the current crisis into an opportunity to create a more resilient ASEAN community that leaves no one behind.

The report also stated that women’s role in the health sector has been critical during the pandemic, whether as community leaders, first responders, hospital doctors or support nurses.

In ASEAN countries, women make up 67 per cent of those employed in human health related activities.

And yet, women in ASEAN member countries rarely have decision-making power in the healthcare sector. The report adds that it is encouraging that the current Minister for Health in Vietnam is a woman.

Furthermore, an analysis of hospital data revealed that only 11 per cent of chief executive officers in the region’s biggest hospitals are women.

With such limited representation in health-related decision-making, women in ASEAN member countries are unable to shape health policy and tailor services to women’s needs, including those for COVID-19 response and recovery.

Increasing representation of women in parliaments, particularly substantive representation and voices, can spearhead policy change in areas of key importance to promote gender equality and women’s empowerment, such as education, healthcare, decent work and care policies.

Over the past two decades, ASEAN member countries have made significant progress towards enhancing women’s representation in parliaments (from 12 per cent of seats held by women in 2000 to 22 per cent in 2022), but the regional average still falls below the global figure of 26 per cent.

As women and men engage differently with the environment, valuing and supporting their differentiated contributions is key to preventing environmental degradation.

The report notes that at home and in their communities, women may play a critical role in leading sustainable resource management practices and can be key actors in the fight against climate change. In addition, traditional ecological knowledge is typically held by indigenous women.

As such, the contributions of women can be critical to create transformational policies and practices for conservation. However, both in private firms and public institutions, women are often excluded from top-level decision-making positions.

The report added that across ASEAN member countries, in 2020, six per cent of environmental and related ministries had a female minister (compared to the global aggregate for 15 per cent).