VIÑALES, CUBA (AFP) – A year ago, Carlos Millo was renting out rooms to foreigners in the picturesque town of Vinales, a popular tourist getaway in rural Cuba.

Now, Millo and other townsfolk have had to return to an age-old means of survival, growing their own food as the coronavirus pandemic has robbed them of holidaymakers.

“We have had to return to the land,” he told AFP while dusting soil from the chard plants he has started to grow in a 50-square-metre garden behind his house.

Until the global health crisis, tourism directly and indirectly provided an income for about 80 per cent of the 28,000-odd residents of the town nestled in a fertile valley surrounded by dramatic limestone outcrops known as “mogotes”.

Just a decade ago, Vinales’s economy was an agrarian one based largely on farming. But as communist-governed Cuba’s economy opened up, the tourist dollars started flooding in, and people like Millo turned their attention away from farming to the services industry.

But as suddenly as it arrived, the new-found prosperity was cut short by the pandemic. And today, the porches of the town’s famously multi-coloured wooden homes – many turned into guesthouses, restaurants, cafes and shops – are heartbreakingly empty. 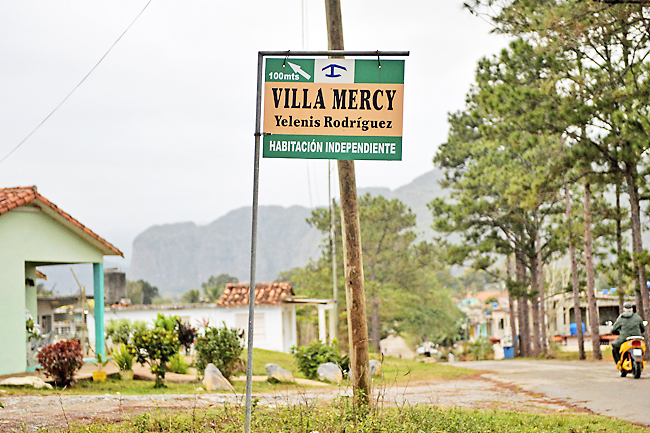 “They said things would go back to normal in six months, but it’s still going on. We’re heading for one year”, said Millo, who before Covid-19 rented out two rooms in the house he shares with his wife and daughter.

“We are in decline, we are without work,” he said, walking through his rows of tomatoes, beans and other legumes.

Tourism “helped the families a lot”, said Millo, who cannot wait to return to being a guesthouse host.

The Vinales Valley from which the town takes its name was declared a heritage site in 1999 by United Nationas Educational, Scientific and Cultural Organization (UNESCO), which describes it as “an outstanding karst landscape in which traditional methods of agriculture (notably tobacco growing) have survived unchanged for several centuries”.

The region also preserves a rich vernacular tradition in its architecture, crafts, and music, according to the UN’s cultural organisation.

These attributes proved popular with tourists. Vinales first turned to tourism after Cuba’s partial economic liberalisation in 2011 allowed for small business licenses, and benefitted from the tourist boom that followed the warming of ties between Havana and the United States (US) a few years later.

Tourism is the economic mainstay of the island, raking in some USD2.6 billion in 2019. The townsfolk of Vinales have bitter memories of March 2020, when the last tourists left en masse as borders were rapidly shuttered due to the fast spread of the deadly virus.

“There was a time when there were not enough rooms and tourists had to sleep on the town square,” recalled Millo of Vinales’s early days as a destination for globetrotters.

But the tide started turning even before Covid-19, with US sanctions and other restrictions tightened under the presidency of Donald Trump. This, in combination with the pandemic shockwave, saw tourist numbers to the island dropping from 4.3 million in 2019 to 1.1 million in 2020.

Cuba itself is one of the countries least affected virus in Latin America, with some 47,000 recorded infections and 277 deaths. But it has not been spared the after-effects. Until last year, Yusmani Garcia made a tidy CUP500 (about USD21) per trip with his horse-drawn cart to show tourists the breathtaking views at the heart of the valley.

At the time, the minimum wage for a Cuban was USD36 per month. He had built his own cart with throw-away pipes and other construction materials. Its wheels sport old pot lids for hubcaps. But today the improvised vehicle is stored in a garage, and Garcia – a 45-year-old father of two – has taken to making horse shoes. “It has been a difficult change, not many people want to do this job,” he said while removing a piece of red-hot metal from a furnace with a pair of tongs.

He bent the softened metal and hammered it into a horseshoe shape. He sells two pairs for CUP50.

Eduardo Hernandez, 52, runs the Paco-Concha farm that has been in his family since 1888, and also became a hot tourist attraction.

Since the foreign income dried up, the family now grows its own food, and Hernandez said his workers have what they need to survive: rice, maize, beans, and sheep. He has, however, had to let some of the employees go.

For Hernandez’s sister, Rosita, the change has meant the shuttering of her restaurant, where visitors used to see out the day with food and music in the lush, green setting.

At one time, “we had 106 tourists together from different,” countries, she sighed while folding red tablecloths. “It was all we had.”