GORENKA, UKRAINE (AFP) – Sweet-smelling wood chips are layering the factory floor again at the toy manufacturer where Robert Milayev works now that production has restarted after the withdrawal of Russian troops.

Thanks to donations, the factory outside Kyiv is back making wooden toys following a three-month hiatus that started when fighting with Moscow’s army left the factory damaged.

“When the electricity came back on and the sound of the machines came back, we were crazy with joy,” said Milayev, the chief engineer.

Like the rest of the village of Gorenka, the Ugears factory still bears the scars of Russia’s invasion. Windows at the factory are still being replaced.

On May 18, after Russian troops pulled back, employees put on overalls again and production of laser-cut models from birch, alder and poplar has been running at full speed ever since.

“Before the war, the wood came from Belarus, but now we buy it mainly from Ukraine,” said CEO Oleksiy Lysianyi, referring to his country’s northern neighbour which hosts Russian forces. 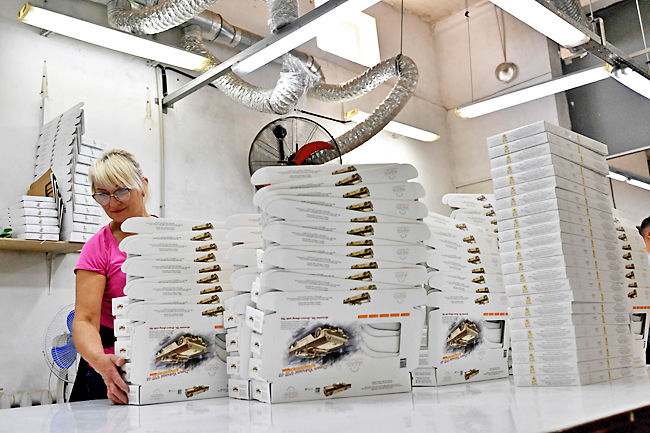 Nearly five million jobs have been lost in Ukraine since Russia attacked on February 24, according to the International Labor Organization. Lysianyi has managed to keep all his staff.

Some EUR800,000 collected by a charity has allowed the company to move forward, despite a slump in sales.

No employees were hurt when fighting was raging around the factory and Russian forces were still trying to advance towards Kyiv.

Storage units at a separate location that was occupied by Russian troops were lost. Now, each online purchase on the company website includes a EUR5 donation to the war effort.

Customers in 85 countries on five continents have already made their donations.

“When we say we deliver to China, people are surprised because we usually buy from there,” said Lysianyi.

The Ukrainian flag is everywhere – on the factory roof, plastered on its walls.

Thirty-three-year-old manager of the packaging line Iryna Denysyuk said she is “very proud” to continue the work even during war.

The hundreds of models of games and puzzles being produced in Gorenka aren’t even meant for children. These toys are for grown-ups, people 14 years or older.

“Still I test them with my children. This helps us get some family time in an age where many young people are glued to their cell phones,” said Lyssiany to the sounds of building work.

Before the war, over 100,000 units rolled off the production lines every month.

They are designed to be assembled without glue and the packaging mirrors the puzzles’ complex computer designs.

As the war-time economy obliges, nothing is wasted.

Leftover wood from the laser-cut plates are given to a company that uses them as fuel.

The cut-outs are carefully checked for quality. Milayev said he is thinking up new designs to give preoccupied minds in his country a distraction.