KYIV, UKRAINE (AP) – The heavy rubber gas masks placed atop small wooden desks are nothing strange to these children as they file past the bomb shelter’s iron door to attend classes in weapons theory.

Nearby, children giggle, trying to keep up with their English teacher as she sings and gestures “Head and shoulders, knees and toes. Knees and toes!” each repetition getting a little faster.

Unique in Ukraine, Volodymyr the Great school Number 23 on the outskirts of Kyiv trains children to become military cadets, starting at the age of seven.

They are sent to this weekday boarding school to learn discipline, but many now see the skills being taught here as essential to their survival, returning to class with the country at war.

The school officially re-opened last Friday for the first time since Russia launched its invasion of Ukraine on February 24.

Many of its 540 students took part in a rehearsal Thursday for the opening day ceremony, the boys in black and gold military uniforms, often a little oversized and reminiscent of the Soviet era, with broad hats and heavy shoulder boards. In formation, the students carried tasseled frames of blue and yellow – the national colours – moving in time as the music alternated between children’s songs and military marching anthems. 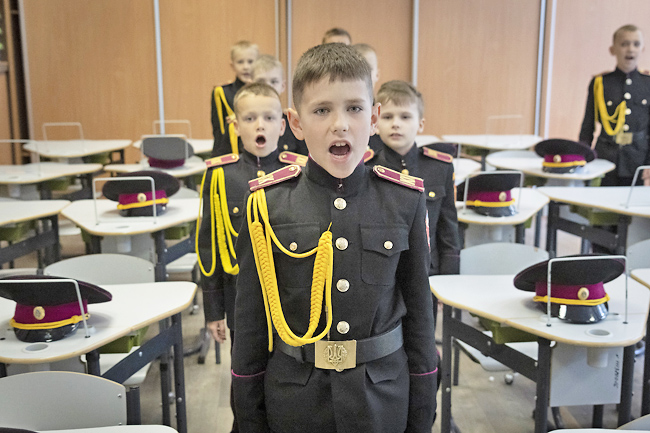 Many cadet schools were set up in Soviet republics, but students at Volodymyr the Great were all born long after the collapse of the Soviet Union in 1991 and were not in recent years pressured to join the military when they graduated.

Yaroslav, a 16-year-old student at the school, always wanted to study law and try life in Western Europe. But his school is only a few kilometrers from where the Russian advance left neighbourhoods pulverised by artillery fire, civilians thrown into mass graves, and attitudes hardened among ordinary Ukrainians.

“I’ll be honest with you … I want to fight in this war,” Yaroslav said. “I always wanted to travel but that decision has changed. I want to become a military man.”

Yaroslav’s father, an army engineer, was killed after war first broke out in the east of the country in 2014.

“My father was not afraid to go to the front, and I want to be that way too,” said Yaroslav.

Many of his classmates said they were inspired by the bravery displayed by Ukraine’s armed forces during the five-week siege of Kyiv that ended with the Russian retreat.

“We are constantly getting stronger and becoming one of the best armies in Europe, that’s how we can hold the Russians back,” said Yaroslav’s classmate Bohdan. “And it’s thanks to those fighters who stand at the front line, that we can keep going.”

Their English teacher Olha Kyrei, who has taught at the school for nine years, says she’s seen a difference in her students since the war started.

Kyrei keeps in touch with school graduates – referring to them as “my children” – who have been drafted into the military, sending them text messages “nearly every day.”

She hopes the war will be over by the time her current batch of students graduates.

At school and during months of online classes Holovyhyna and her teachers say they try to keep the children occupied with additional homework and activities to stop them dwelling excessively on the war.

Teachers, she said, chose to stay in Kyiv when the fighting started, continuing classes online from their homes and volunteering to keep school facilities open so local residents could use its bomb shelters.

“I’m very proud of them,” Holovyhyna said, pausing with emotion. “Our teachers are focussed on making the studying process comfortable… We’re bringing them up to become professional engineers, doctors, teachers and soldiers as well.”