THE WASHINGTON POST – In January, I sat on a mountain, savoring the panorama. I could hear soft music, and crystals swirled in and out of my mouth with every inhale and exhale.

Several feet away, a boulder projected a beam of light into the sky, and rocks in the distance produced the same beams.

This signalled that other people were on the mountain, which gave me a sense of connection – a rarity during the coronavirus pandemic.

I was using TRIPP, a virtual reality (VR) meditation app that encourages users to focus on their breath while viewing engaging visuals.

During the pandemic and mental health crisis, VR meditation apps have increased in number, which partly explains why videogaming has dropped from 72 per cent to 64 per cent of the overall VR pie, according to Polaris Market Research.

The uptick in VR meditation parallels an avalanche of smartphone apps for mental health, which total about 20,000. VR is more immersive than smartphones and, some say, can enable feelings of awe, relaxation, mindfulness and connection with fellow meditators- or their avatars, at least. 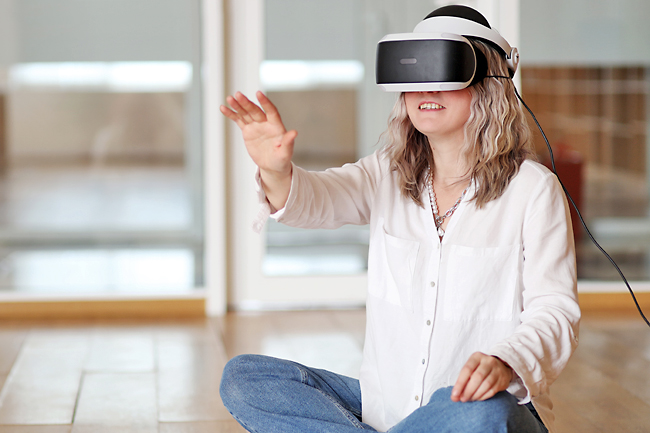 I tried six of these relatively inexpensive VR apps (all are compatible with the popular USD300 Meta Quest 2 headset) and talked with entrepreneurs and researchers to learn how they compare with regular meditation and whether I should plug VR into my mental wellness routine.

With its surreal stimuli, TRIPP aims to stir feelings of awe, defined as the emotional response to something so vast that it shifts one’s worldview. Some research suggests that experiencing awe can improve well-being. In a recent study, 44 per cent of VR users got goose-bumps, a physiological sign of awe.

Each of TRIPP’s “calm” sessions, like my mountaintop meditation, concludes with a few minutes spent hovering in fictional galaxies bathed in warm hues. Up there, users can experience the Overview Effect, sensations of awe and wonder felt while gazing down from the cosmos that have been reported by astronauts.

Another option: journeys through undulating, hyper-colourful pieces of art, beautifully rendered works of geometry and psychedelia.

Many VR meditation apps are more about relaxation than awe. “Some apps are like, how can I blow your mind,” said CEO of Cubicle Ninjas Josh Farkas. The company makes the popular app Guided Meditation VR, which offers virtual beaches, waterfalls and other soothing landscapes. “Our app is like, how can we make you feel like you’re getting a big hug?”

A recent review found that VR meditation might promote relaxation; it reduced stress for isolated people during pandemic lockdowns, for first-year medical students, college students before big exams, British office workers, and in comparison to audio and 2-D video meditations.

But mindfulness meditation, in which people practice being present in the moment, involves two stages, said a University of Toronto clinical psychologist who researches mindfulness-based interventions Zindel Segal.

VR is a “powerful technology” for achieving the first stage: settling your mind, he said. But it interferes with the second stage, “investigating whatever shows up in your mind with curiosity and kindness with the goal of getting to know your mind itself”.

That’s because “VR is like putting a curtain between you and your capacity to watch how your mind moves,” he explained.

The breath crystals in TRIPP, for instance, are forming “two degrees of separation from what your breath is actually doing,” said Segal.

He also has concerns about the practicality of VR meditation. If someone cuts in line at the bank, “you’re not going to have crystals or high-resolution graphics,” he said. “What you have is your breath.”

But Judith Amores, a Harvard research fellow and VR designer, thinks that meditating in busy VR realms prepares you for just this situation. “VR trains you to stay mindful in the moment despite distractions,” she said.

And as companies design lighter, more transportable devices, more people may strap on VR headsets while waiting in line and elsewhere.

Farkas believes the pleasing sensory stimuli of his app could also encourage many people who wouldn’t otherwise meditate to give it a try.

Amores was such a person; she was inspired to use and design VR meditation after struggling to meditate regularly. “I felt more productive when I meditated, but actually doing it was tough,” she said. “I thought, how can we make this experience more engaging for novice users?”

Another hook for newcomers is gamification. With the app Maloka, your avatar, or “Spirit”, evolves and looks stronger the more you meditate.

Whereas many Westerners see meditation as a solitary endeavor, Buddha taught that meditation should be anchored in community, said Jeremy Nickel, who started EvolVR, a social platform used for VR meditation that was recently acquired by TRIPP.

“Group meditations get you outside of your head,” he said. “They make it easier to return to your own practice.”

I’d never meditated in a group and felt nervous about doing so in VR; this emotion was only heightened when, upon entering my first session, I immediately found myself invading another avatar’s personal space. We finally disentangled and headed for opposite edges of a bluff overlooking a pixelated beach for the session.

Another group meditation happened inside a virtual cave. There, I accepted that I would occasionally bump into other avatars and managed to focus on my breath and realized the instructor was giving very helpful guidance.

I can see why Segal, the Toronto psychologist, hopes VR can increase access to qualified mindfulness teachers. Meditation alone and without VR remains my daily go-to, but VR is an important change-up.

On days when I lack willpower to sit down and close my eyes, the novelty of meditating in space or the ocean depths reels me in.

“VR is just another tool for mental health,” said Farkas. “It may be scary for some. For others, it’s the incentive to put some self-care on the calendar, get excited to sit on a virtual beach and breathe.”