THE WASHINGTON POST – “This story was always in the back of my mind,” said Lola StVil about The Year I Flew Away, her first novel for middle-grade readers.

The book draws from her experiences as a young immigrant in the United States (US). StVil (pronounced Saint Vil) wrote the book under the pen name Marie Arnold. StVil was seven-years-old when she came by herself to New York City from Haiti, a small country on a tropical island in the Caribbean Sea. Her book’s main character, 10-year-old Gabrielle Jean, also arrives alone, in the same city and season.

As StVil did as a child, Gabrielle leaves her family behind to live with her uncle, aunt and cousins. Her parents want her to enjoy the opportunities in America. They hope to join her when they can. For Gabrielle, one big challenge is getting used to the bitter winter cold. In her village in Haiti, she could dance in her bathing suit in the warm rain. She is also lonely and homesick. The kids in school make fun of her strong accent. They tease her for not being “American enough”. She desperately wants to fit in. Then she makes her first friend: a talking rat named Rocky.

“Every main character deserves an awesome sidekick,” said StVil about the rodent with a big personality. Rocky dreams of being accepted, too. He wants to transform from street rat to lovable bunny rabbit.

A charming witch named Lady Lydia offers to help Gabrielle. Her price seems small: Gabrielle must give up something she won’t even miss. But once she agrees, Gabrielle starts to realise how cleverly she’s been trapped. 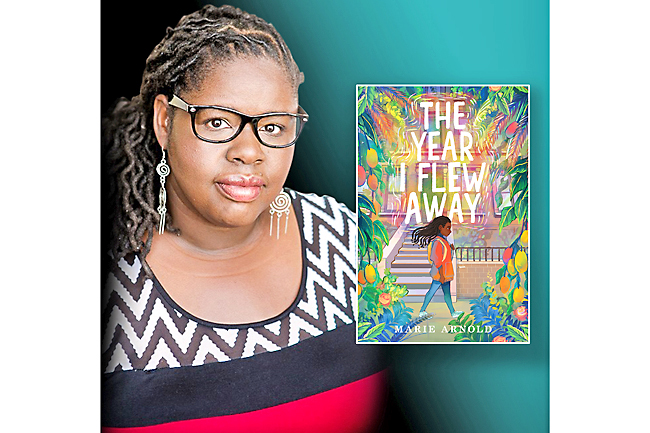 Like Gabrielle, StVil, as a new immigrant, tried to change things about herself to belong. What she ate, for example. “I wanted Lunchables like kids on TV,” she told KidsPost by phone from her home in Los Angeles. She didn’t want to eat her aunt’s home-cooked Haitian dishes.

StVil didn’t have friends for a long time, she said, so she found them in books by Louis Sachar and Beverly Cleary. Although she was “always making up stories” in her head, StVil didn’t think she could be a writer, because, as someone with dyslexia, she had trouble with spelling and some aspects of reading.

That’s why she likes to offer young people the advice she’s glad that she followed when she began to write, “Just keep writing. Don’t criticise yourself. Write whatever you want.”

That continues to be her process for a first draft. “I try to let the characters steer the story,” she said. “I write to find out what happens.”

Writing The Year I Flew Away was also a journey into her memories. And this past year she’s had two visitors from Haiti who have helped her experience the US anew: her husband’s cousins, boys aged 13 and 14.

“It’s been fun to see stuff through their eyes,” she said.

StVil is waiting for new characters to appear in her mind. That will jumpstart her next novel. At the same time, Rocky keeps telling her he wants his own book.

And she continues to think about the lives of today’s young immigrants. It can be hard “trying to find your space and your way” in a new place, she said. “But you don’t have to forget (your birth country) for the other. You can have both.”