Austria’s president likely to be re-elected as ‘safe’ choice

VIENNA (AP) – Austrian President Alexander Van der Bellen (AP; pic below), who held office through a period of domestic political instability, a global pandemic and the ongoing war in Ukraine, has campaigned for re-election by pitching himself as the stable option in unstable times.

Voters are widely expected to hand Van der Bellen a second term. The main question is whether his victory will come when the country holds the first round of its presidential election tomorrow or if the election will go to a second-round runoff.

Campaign posters in recent weeks featured the incumbent occupant of Vienna’s Hofburg presidential palace with a red-white-red background and the slogan ‘The Safe Choice in Stormy Times’.

Van der Bellen, who previously belonged to The Greens but is running as an independent, is one of seven candidates vying for the presidency. He has the implicit or explicit backing of most major parties in Austria, which is partly why his re-election is so likely.

The Greens, the Social Democrats and the liberal Neos have endorsed him, and the conservative People’s Party declined to field a challenger. Of the five parties represented in the Austrian Parliament, only the far-right Freedom Party opted to run a candidate against him – its former parliamentary leader Walter Rosenkranz. 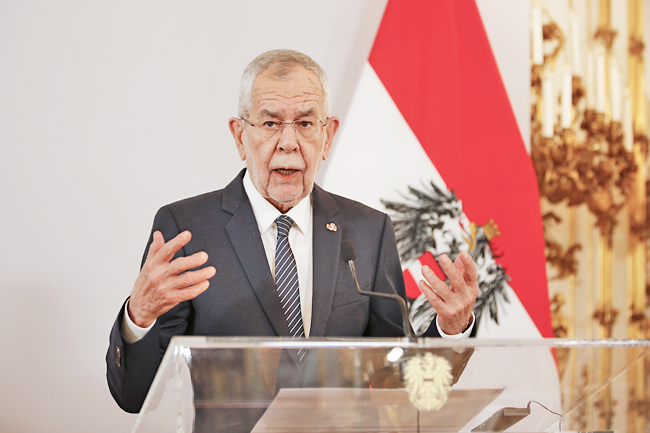 Other candidates on the ballot include a left-leaning, satirical party’s Dominik Wlazny, known as Marco Pogo, as well as a handful of right-wing and conspiracy-minded candidates, such as Michael Brunner of the anti-coronavirus party People Freedom Fundamental Rights and Gerald Grosz, a former leader of the now-defunct Alliance for the Future of Austria.

Austrian presidents are elected for six-year terms and serve as the country’s head of state.

Although the position on paper holds significant authority, including to sign off on legislation, dismiss government ministers and to dissolve the Parliament and call for new elections, the powers are rarely used.

Van der Bellen must receive 50 per cent of the vote to avoid a runoff election in November.

Opinion polling has consistently put him above that mark in recent weeks.

Head of the Vienna-based polling firm Public Opinion Strategies Peter Hajek said the most recent polls put Van der Bellen’s support well above 50 per cent, meaning that he will likely reach that threshold even if there is low voter turnout. “Alexander Van der Bellen indeed holds all the trump cards,” Hajek said.

As a result, the presidential campaign has been relatively subdued: Van der Bellen has opted for smaller events rather than large-scale rallies, and he declined to participate in televised debates with his opponents.

Rosenkranz and other candidates, meanwhile, have used the race as an opportunity to get their messages and campaign rhetoric out despite the tough odds.