Cormann, whose nomination in March was celebrated as a diplomatic triumph in Australia, served as finance minister for seven years until late 2020 under right-wing governments.

“You can count on me to give it my absolute best as we work towards a better future, together,” Cormann said at a handover ceremony at the Paris headquarters of the organisation, according to a statement.

His campaign for the position faced fierce resistance from top environmental groups who criticised his record in successive climate-sceptic Australian Cabinets, notably under former prime minister Tony Abbott. The 50-year-old conservative took over as secretary general from longstanding chief Angel Gurria, who stepped down after 15 years at the helm.

The OECD counts 37 states as members and acts as a sort of economic think-tank on economic and policy questions, producing reports and recommendations that are influential in national capitals. 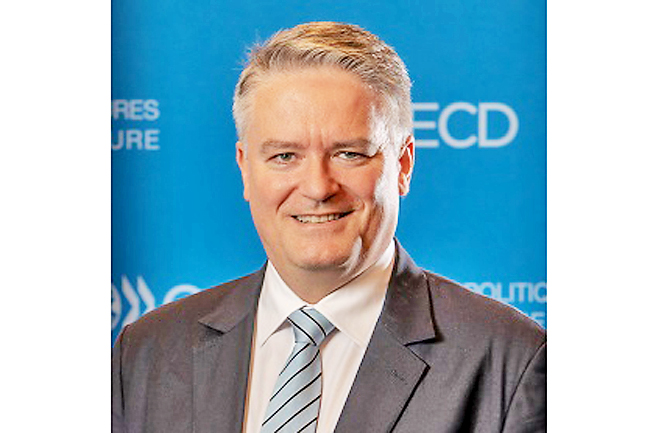 It also serves as a forum to discuss policy, and has recently spearheaded talks on a new global plan to tax multinational tech groups that has become a tense issue between European countries and the United States (US).

“We need a tax deal as soon as possible,” he told Le Figaro newspaper in France last month.

The head of the OECD is often invited to major international meetings alongside the heads of other multilateral institutions such as the United Nations or the World Bank.

In March, Australian Prime Minister Scott Morrison called Cormann’s nomination “the most senior appointment of an Australian candidate to an international body for decades”.

He grew up in the small town of Raeren in eastern Belgium and speaks in strong German-accented English, which has seen him likened to Terminator star Arnold Schwarzenegger in his adopted homeland.  While campaigning for the OECD position, he emphasised his multilingual background – he speaks four languages – as well as his experience in Asia which was decisive in landing him the job.

Greenpeace expressed “deep dismay and anger” at the time of his appointment while the head of E3G campaign group Nick Mabey said it sent a “dangerous signal”.