THE WASHINGTON POST – The new year’s first blockbuster novel is The Push, by Ashley Audrain, a psychological suspense tale about a mother’s fears that her preschool-age daughter may be a psycho killer. If this premise sounds familiar, you may be recalling The Mother of All Evil Spawn Stories, the 1956 film The Bad Seed.

The Bad Seed, which was inspired by a 1954 novel of the same name by William March, also was a psychological suspense tale about a mother who suspects her young daughter is a budding Ted Bundy in pigtails.

We first meet Blythe Connor, the tormented mother who narrates The Push, as she’s sitting in her car at night, watching her ex-husband’s house. Is she a stalker? Unhinged? Maybe. Through the glowing windows, she spies her ex-husband, named Fox, dancing with his second wife (younger, of course) and playing with their adorable toddler son. But what keeps Blythe sitting out there in the cold and dark is Violet, the daughter she and Fox share. Violet, now on the cusp of adolescence, is framed in one of the windows, locking eyes with Blythe, the mother whose breakdown and banishment she orchestrated. Violet also killed a playmate and her younger brother Sam, the son of Blythe and Fox.

The Push is structured as a manuscript that Blythe writes for Fox to set down her version of how their once happy life together unraveled. (Blythe aspired to be a writer before the demands of stay-at-home motherhood intervened.) But, since Blythe is the walking contradiction of her name – a jittery, insecure woman who second guesses herself constantly – questions arise about her reliability as a narrator. 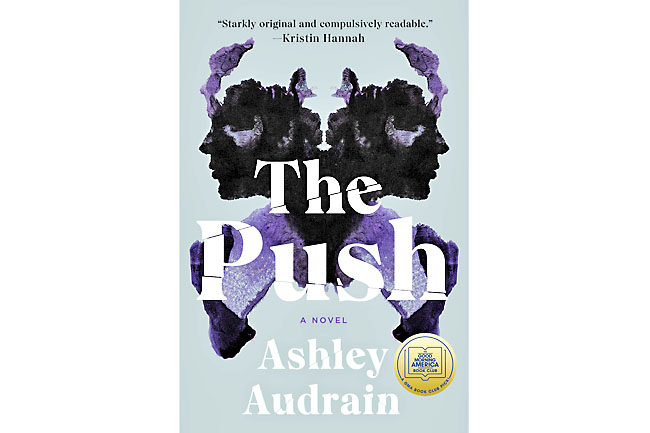 Blythe’s own family history complicates her story: Her abusive grandmother committed suicide, and her moody mother deserted Blythe and her father without a backward glance. “The women in this family… we’re different,” her mother flatly tells Blythe as a child. Blythe worries she’s inherited damaged DNA when it comes to mothering, especially when she gives birth to Violet and feels strangely unmoved by this “warm, screaming loaf of bread” with “slimy and dark” eyes who’s placed on her chest to nurse.

Surely one of the reasons The Push has become so popular is that the manuscript structure of the novel allows Blythe to express such uncensored feelings about a child she dislikes (and, eventually, comes to fear). Audrain has a sharp ear for Mom’s playgroup conversations, where the other mothers begin to vent irritations with their offspring, but then abruptly reign themselves back into niceness with platitudes like, “it’s all so worth it when you see their little faces in the morning.” Blythe feels differently about baby Violet – whom she characterises as emotionally cold and destructive.

Every age has its own parenting wisdom as well as its shameful parental anxieties. In the mid 1950s, when The Bad Seed was published, there was growing debate over whether nature or nurture played the larger role in childhood development, as well as an uptick in interest in the causes of juvenile delinquency and adolescent gangs. Perhaps the gravity of that debate explains why March’s novel was nominated for the 1955 National Book Award.

Now, like a bad penny, the Bad Seed plot has turned up again. Why? Perhaps Audrain’s novel is striking a nerve with a younger generation of women exhausted by the “monstrous”, pressures of contemporary motherhood – “the push” to be unflagging, hands-on nurturers.