THE WASHINGTON POST – A kind of gravitational pull emanates from Aubrey Plaza as the title character in Emily the Criminal, a passably diverting crime thriller where, in place of a moral centre, Plaza delivers a performance that is entertainingly blackhearted. (Well, perhaps not entirely black, but certainly a lovely shade of charcoal grey.)

As a 30-something art school graduate trying to pay off USD70,000 in college loans by working for a Los Angeles catering company who discovers the lucrative world of credit card fraud – and, if only briefly, a hint of romance – Plaza draws and holds our focus.

That she does so without sliding into the easy deadpan she is so often pigeonholed into, thanks to her droll turn on Parks and Recreation, is a nice surprise.

Plaza, sporting a plausible New Jersey accent to establish her character’s Newark roots and toughness, plays Emily, a talented and underemployed artist with skills beyond the canvas and a criminal record for DUI and unspecified aggravated assault.

When she stumbles onto a way to make a quick USD200 working as a dummy shopper – using a stolen credit card to purchase, say, a flat-screen TV that will later be sold on the street – she proves to be a quick study in the ways of deception. 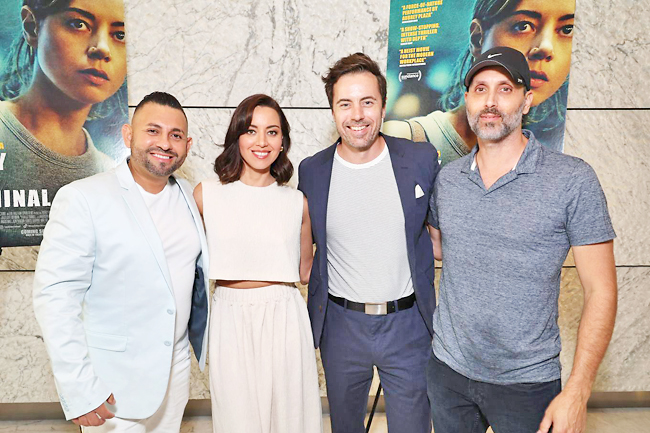 Her mentor in the field is Youcef (Theo Rossi), a Lebanese immigrant who’s a perverse manifestation of the American Dream (Hollywood version): Make a buck however you can, until you can go legit with your ill-gotten gains.

Youcef, who wants to buy and run an apartment building, takes Emily under his wing and teaches her the tricks of his illicit trade. They’re a simpatico pair, and soon have more than a business relationship.

But there are a couple of rules: Never conduct business at your home, and don’t try to scam the same store twice in one week. Emily eventually breaks both of them, which leads to trouble with Youcef’s cousin and business partner (Jonathan Avigdori), who is less warm and fuzzy than Youcef.

This is where Emily reveals herself to possess an untapped reservoir of badassery – compressed into diamond-hardness by the weight of life’s unfairness. One scene in which Emily interviews for an unpaid internship with the dismissive and condescending head of an ad agency (Gina Gershon) shows Emily to be far from a pushover.

As she later explains to Youcef, confiding in him that the aggravated assault charge had been filed by a former toxic boyfriend: It’s not that Emily went too far with him, but that she didn’t go far enough to stand up for herself. If she had really scared the guy, he never would have pressed charges.

In the film’s third act, Plaza is kind of fun to watch, but also a little scary.

When Youcef takes Emily to meet his mother (Sheila Korsi) and the older woman asks Emily what she wants to do with her life, Emily says she doesn’t still know. You’ll figure it out, Mum reassures her. “Emily the teacher? Emily the mother? Emily the something.”

Aubrey Plaza has already figured that last part out. Emily the Criminal may not be much of a role model, but its star is something else.