Two of the victims were killed in Yangon, the country’s largest city. One of them was shot in the head and another was shot in the abdomen, according to local media covering the demonstrations in Hlaing Thar Yar Township.

A third person died in the northern city of Hpakant when police fired into a crowd of demonstrators, local media reported. A fourth victim, a woman, died after being shot in the head in Mandalay, the country’s second-largest city, as security forces were conducting clearance operations.

In Yangon, video posted on social media showed crowds of people, some wearing hard hats and gas masks, running down a street amid sounds of gunfire. The demonstrators quickly sprayed vapor from fire extinguishers as they retreated.

The use of fire extinguishers — common now in protests across Myanmar — is intended to smother tear gas and also create a vapor screen that makes it harder for police to pursue or shoot demonstrators.

There were also reports of injuries from live rounds and rubber bullets in other parts of Yangon, including Insein district, where billows of black smoke could be seen after security forces reportedly set roadblocks on fire.

On Saturday, the civilian leader of Myanmar’s government in hiding vowed to continue supporting a “revolution” to oust the military leaders who seized power in the February 1 coup.

Mahn Win Khaing Than, who was named the acting vice president by Myanmar’s ousted lawmakers and is a member of deposed leader Aung San Suu Kyi’s political party, addressed the public for the first time since the coup.

“This is the darkest moment of the nation and the moment that the dawn is close,” he said in a video posted on the shadow government’s website and social media. 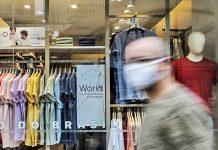