JERUSALEM (AP) – Khaled Shurrab had been waiting more than half his life to get out of Gaza.

The 27-year-old had never left the coastal enclave, which has been blockaded by Israel and Egypt since 2007. He couldn’t find a job – the territory’s youth unemployment rate is over 60 per cent. Like a growing number of Gazans, he packed his life into a suitcase and eventually made it to Turkiye, where he set out on a treacherous sea voyage to Greece last October. When his rickety boat went down, his body disappeared into the sea.

A rising number of Gazans, seeking better lives abroad, are drowning at sea. The devastating procession has prompted a rare outpouring of anger against the territory’s militant Hamas rulers, a number of whom are making their own – very different – exodus.

In recent months, high-profile Hamas officials have quietly decamped to upscale hotels in Beirut, Doha and Istanbul, stirring resentment among residents who see them as leading luxurious lives abroad while the economy collapses at home and 2.3 million Gazans remain effectively trapped in the tiny, conflict-scarred territory. Four wars against Israel and dozens of smaller skirmishes over the years have taken their toll in casualties, damage and isolation.

“I blame the rulers here, the government of Gaza,” said Shurrab’s mother, Um Mohammed, from her home in the southern town of Khan Younis. Her son’s body was never recovered from the Aegean Sea. “They live in luxury while our children eat dirt, migrate and die abroad.” 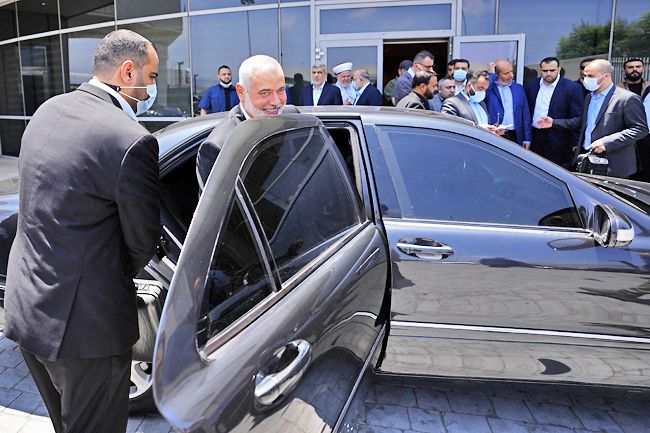 Hamas says the leaders who have left plan on returning. Yet the string of exits keeps growing.

Hamas chief Ismail Haniyeh relocated to Qatar, an energy-rich Gulf state, with his wife and several children in 2019. Political leader Fathi Hamad moved to Istanbul a year ago and frequently flies to Beirut, Lebanon’s capital, where media reports have shown him in meetings at a five-star hotel.

Deputy leader Khalil al-Hayya also relocated to Turkiye last year, according to news reports, including Hamas outlets that highlighted some of his travels. Since then, he has paid only two short visits to Gaza.

Turkiye in particular has long been a favourite destination for Hamas leaders and supporters because of the country’s lenient visa policies toward members of what the United States and Europe consider a terrorist organisation.

Several children of Hamas leaders are running lucrative real estate businesses for their parents in Istanbul, according to a Palestinian businessman familiar with their enterprises. He spoke on condition of anonymity for fear of reprisals.

Gaza analyst at the International Crisis Group Azmi Keshawi, said that the movement of officials abroad has in some cases helped the group coordinate its operations with key patrons outside the territory. But he said Hamas nonetheless has a growing image problem at home.

“Ordinary Palestinians see that Hamas has gone from this humble Palestinian leadership who lived and struggled among the people to living in these comfortable zones where they are no longer suffering and seem far from the Palestinian cause and issues,” he said.

“Definitely people talk about this and draw comparisons in anger.”

Wary of public backlash, Hamas does not comment on reports about its leaders leaving Gaza. As social media fills with revelations, it casts leaders’ stays abroad as temporary foreign tours aimed at drumming up support. Some of these tours last for years.

Public outrage erupted last month at a mass funeral for young Gazans who drowned en route to Europe. Distraught families blamed Hamas for contributing to the collapse and chaos of Gazan life and accused the militant group of nepotism and corruption.

Mourners shouted the names of leaders including Haniyeh and Yehiyeh Sinwar, Hamas’ current leader in Gaza, and chanted, “People are the victims!”

Such defiance is rare as Hamas moves to quash nearly all hints of dissent – though it remains the most popular group in its Gaza stronghold. A recent poll by the Palestinian Center for Policy and Survey Research found that 43 per cent of residents of Gaza would support the group if parliamentary elections were held, compared to 30 per cent for the rival Fatah movement. The figures were nearly identical to support levels three months earlier.

The poll, conducted in December, questioned a total of 1,200 people in both Gaza and the occupied West Bank on a range of issues, and had a margin of error of three percentage points. Still, more Gazans appear to be risking everything to get out.

A report issued in November by the Council on International Relations-Palestine, a Hamas-affiliated think tank, said 60,000 young people have left Gaza in recent years.

It blamed Israel, saying “the policies of occupation and siege” have “turned the life of Gazans into unbearable hell”. The report was the first semi-official data on emigration. It did not say how the data was compiled.

Some who leave seek job opportunities in wealthy Gulf Arab states. Many, like Shurrab, fly to Turkiye and attempt the perilous sea voyage to Europe in hopes of getting asylum.

Two shipwrecks in October alone made 2022 the deadliest at sea for Gazan migrants in eight years, according to rights groups. Shurrab is among 360 Gazans who have drowned or disappeared at sea since 2014, according to the Geneva-based Euro-Med Human Rights Monitor. Despite the risks, Khaled Moharreb is still contemplating the dangerous sea route.

After earning a nursing diploma two years ago, the 22-year-old said he has been unable to find a job.

“I want to travel and build my life,” he said. “Anything outside is better than this place where you can not do anything and where the government is indifferent.”

Without directly mentioning Hamas, he said he blames “those who control and run the country” for the lack of job opportunities.

Hamas has offered no apologies. Hamas lawmaker Atef Adwan, recently denounced those who attempt to flee to Europe as making a perverse pilgrimage to a land of “deterioration and regression”.

Migration has long carried stigma among Palestinians, who have fought for decades to stay on their land. Haniyeh’s roots in a crowded Gaza City refugee camp are a core part of his political identity.

Amid growing scrutiny, Hamas issued an unusual statement last year announcing the return of three top officials – al-Hayyah, al-Zahar and Salah – to Gaza, reassuring the public that they “did not flee”.

Yet just two months later, news trickled out in Hamas media that al-Hayyah and Salah were on new “foreign tours” in Qatar and Iran.