KINGSTOWN, ST VINCENT (AP) — People who ignored an initial warning to evacuate the area closest to a volcano on the eastern Caribbean island of St Vincent raced to get clear on Saturday, a day after it erupted with an explosion that shook the ground, spewed ash skyward and blanketed the island in a layer of fine volcanic rock.

The eruption on Friday of La Soufrière – its first large one since 1979 – transformed the island’s lush towns and villages into gloomy, gray versions of themselves.

A strong sulfur smell was unavoidable Saturday and ash covered everything, creeping into homes, cars and noses, and obscuring the sunshine that makes the island so popular with tourists.

Chellise Rogers, who lives in the village of Biabou, which is in an area of St Vincent that’s considered safe, said she could hear continuous rumbling. “It’s exhilarating and scary at the same time,” she said. “It’s the first time I am witnessing a volcano eruption.”

Scientists warn that the explosions could continue for days or even weeks, and that the worst could be yet to come. 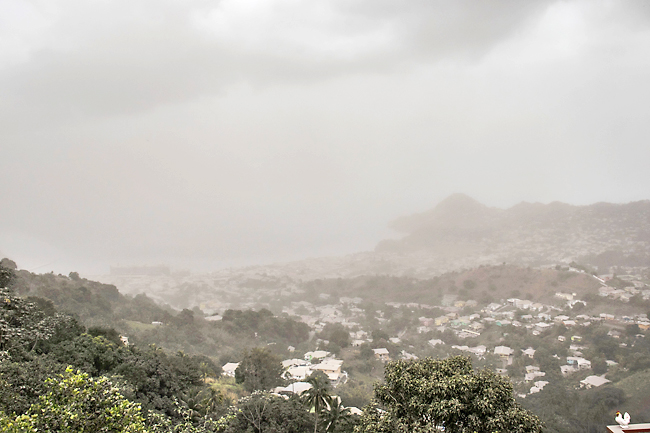 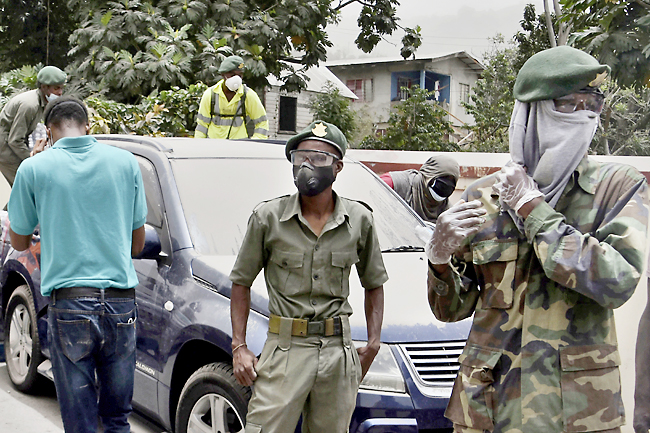 “The first bang is not necessarily the biggest bang this volcano will give,” geologist Richard Robertson, with the University of the West Indies’ Seismic Research Center, said during a news conference.

About 16,000 people have had to flee their ash-covered communities with as many belongings as they could stuff into suitcases and backpacks. However, there have been no reports of anyone being killed or injured by the initial blast or those that followed.

Before it blew, the government ordered people to evacuate the most high-risk area around the 1,220-metre volcano after scientists warned that magma was moving close to the surface.

Prime Minister of St Vincent and the Grenadines, Ralph Gonsalves, said on local station NBC Radio that people should remain calm, be patient and keep trying to protect themselves from the coronavirus. He said officials were trying to figure out the best way to collect and dispose of the ash, which covered an airport runway near the capital of Kingstown, about 32 kilometres south, and fell as far away as Barbados, about 190 kilometres to the east.

“It’s difficult to breathe,” the prime minister said, adding that while the volcano was venting less, a big plume of ash remained. “What goes up, must come down.”

Although Gonsalves said it could take up to four months for life to return to normal, he’s confident it will.

“Agriculture will be badly affected, and we may have some loss of animals, and we will have to do repairs to houses. But if we have life and we have strength — we will build it back better, stronger, together,” he said.

People who didn’t heed the initial evacuation order hurried to do so on Saturday. At least a few ash-covered evacuees escaped in small boats and headed to other parts of the main island, which makes up 90 per cent of the country’s total land.

About 3,200 people took refuge at 78 government-run shelters, and four empty cruise ships stood ready to take other evacuees to nearby islands, with a group of more than 130 already taken to St Lucia.

Those staying at the shelters were tested for COVID-19, with anyone testing positive being taken to an isolation centre.

Nearby nations, including Antigua and Grenada, also offered to take in evacuees.

On Saturday, some people swept outside their homes and taped their doors and windows shut in the hopes of keeping out the ash.

“We’re hearing rumbling from here and witnessed the lightning flashes last night,” said Rukersha Jackson, a 22-year-old marketing specialist who lives with her family a little outside the mandatory evacuation zone. That zone covers the northern third of St. Vincent and is on the opposite side than Kingstown, where most of the country’s more than 100,000 people live.

The ash has forced the cancellation of several flights, and poor visibility limited evacuations in some areas.

Officials warned that St Lucia to the north and Grenada to the south could get light ash fall, though most of it was expected to head northeast into the Atlantic Ocean.

Although the ash can seem scary, it won’t harm healthy people in the short term, said Durham University professor Claire Horwell, in the United Kingdom, who will be analysing the ash emitted by
La Soufrière. She recommended that people wear face masks, long sleeves and pants to avoid irritation.

“Volcanic ash looks really scary, and it is really terrifying to people who have never been exposed to it before, but for most healthy people, it is more of a nuisance,” said Horwell, who is also director of the International Volcanic Health
Hazard Network.

However, she warned that the ash and gases, particularly sulphur dioxide, could affect asthmatics and others with chronic health conditions. La Soufrière last had a sizable eruption in 1979. An eruption in 1902 killed roughly 1,600 people.

The volcano had a minor eruption in December, which led regional experts to fly in to analyse the formation of a new volcanic dome and changes to its crater lake, among other things. The eastern Caribbean has 19 live volcanoes, including two underwater near Grenada. One of those, Kick ‘Em Jenny, has been active in
recent years.

But the most active volcano of all is Soufrière Hills in Montserrat. It has erupted continuously since 1995, razing the capital of Plymouth and killing at least 19 people in 1997.