Korea’s service robot market will grow to an accumulative 230,000 robots by 2025, worth KRW2.8 trillion (USD2.25 billion) in value, according to market data compiled by the International Federation of Robotics.

As of 2020, its size had grown 34.9 per cent on-year to KRW857 billion, surpassing that for industrial robots. The global market for service robots is expected to grow to USD74 billion by 2026.

To meet growing demand for automated services, tech and manufacturing giants here are jumping into the sector of service robots, which is still at a nascent stage compared to the market for industrial robots.

A service robot contains an automated computer program built to perform customer-oriented tasks. Unlike industrial robots that are typically used at factories, service robots can be applied to such tasks as for restaurants, medical care and at homes. 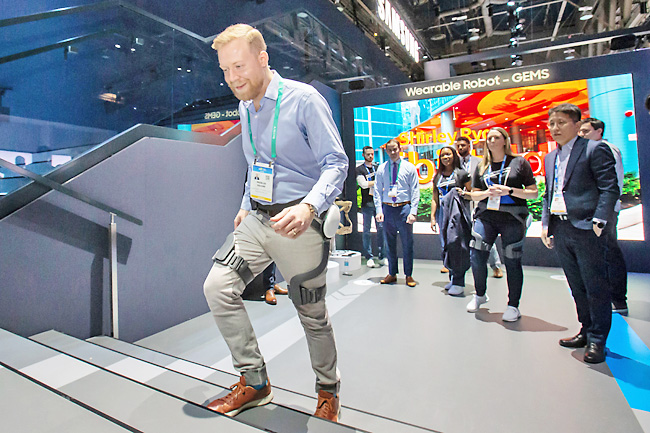 Platform provider Naver opened its new headquarters last month with an aim of creating the world’s first robot-friendly building where robots roam the floors to serve coffee and deliver parcels.

LG Electronics has opted to focus on lifestyle-integrated service robots. Its latest focus has been expanding into the business-to-business market, completing a lineup of six kinds of its flagship CLOi robot with different purposes like delivery, docent and cleaning. The latest version can self-drive and sterilise surroundings with ultraviolet lamps.

Samsung Electronics is set to launch its first robot product in August – a wearable medical robot called Gait Enhancing & Motivating System. Its name will be Fitsam, according to the patent that Samsung has registered with the Korean Intellectual Property Office. The Samsung wearable robot can be attached to the ankle, knee or hips to enhance the muscle strength of users with walking difficulties. Samsung completed FDA approval last month for its global launch.

It has also patented a total of 25 robot products that assist humans in housekeeping, education and sports. Not just targetting the local market, companies are seeking ways to take their robots abroad.

They will test-run quarantine robots at university hospitals in Germany before supplying 5G-based service robots to restaurants, hotels and nursing facilities.

But concerns remain over the leakage of data using robots, as the majority of them are assembled overseas, such as in China.

According to the industry, more than 70 per cent of service robots here, such as those developed by Baedal Minjok and SK Shieldus, are from major Chinese robotics firm Voodoo Manufacturing and Keenon Robotics.

“Using cameras, lidar and radars attached to them, robots take photos or save related data to the manufacturer’s big data server – this means that local firms, who just attach logos on imported robots, are easily exposed to risks of data leakage,” said an industry insider.

There are also concerning voices that point to the need for the government to bolster related laws to actively protect and further nurture the local robotics industry.

In case of the United States (US), it applies a 25-per-cent tariff to service robots imported from China, whereas Korea has no special regulation regarding robot imports.