THE WASHINGTON POST – The World War II officer’s boots were banged-up, with worn soles and scuffed leather, and bore a tag that read “US Army … Circa 1941.”

They seemed rich with history as they sat on a table at Fort Belvoir’s Museum Support Center in Virginia. But the Army had plenty just like them. So they had to go.

Same for the elegant officer’s cap with the faded blue infantry band from the early 1900s. And the white cotton men’s underdrawers, circa 1950. And the piles of heavy leggings. And the Iraqi army helmet. And the women’s black shoes, circa 1985.

And the posters, and rifles, and maybe some tanks, and tens of thousands of other artefacts at the museum centre and 47 Army museums across the country, in Germany and in South Korea.

It’s all part of a massive Army project to “right size” the 580,000 items in its collections, and make the excess available to other museums, government and private institutions, and historical sites, officials said.

“Everything from tanks and howitzers to uniforms and canteens” will be reviewed over the next five years, Division Chief with the Army Museum Enterprise Stefan Rohal, which is heading the project, told the Pentagon’s Defense Logistics Agency. 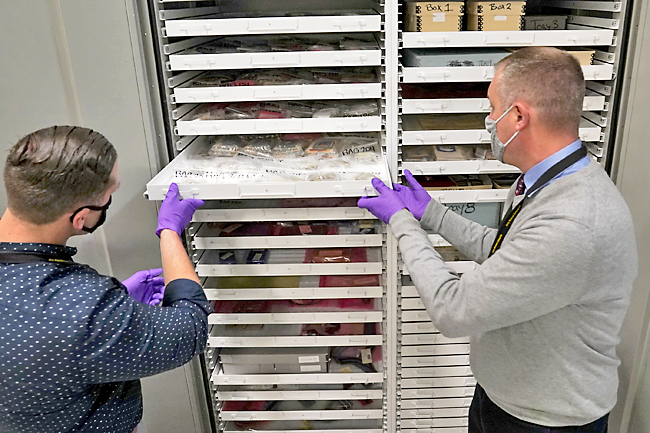 The Army has museums dedicated to the infantry, the cavalry and the artillery.

It has a museum for the Finance Corps, the Medical Department and the Engineer Corps. And it has a museum devoted solely to World War II General George S Patton Jr.

Over time, these museums have all acquired, or been given, a vast amount of objects – from hat stiffeners and uniforms to bayonets and artillery. Some of it is historic, or instructive. A lot of it is not. The Army wants to shed the latter.

“In the past, all the museums were sort of collecting on their own,” Rohal said in an interview last week.

“Now we’re … looking at this, as [to] how much does the Army really need to support its 47 museums …. This is really the first time that we’re looking at this with that central mind-set. What do we need … and what is excess.”

Fort Belvoir’s museum centre, where the project is based, is a huge storehouse of 70,000 pieces of Army ephemera, with rows of cabinets for artefacts and special racks for the Army’s art collection.

Most of the fine art is one-of-a-kind and will be kept, said Curator and Chief of Art for the Museum Enterprise Sarah G Forgey.

But there are some poster art duplicates.

The collection has, for example, 18 copies of Victor Clyde Forsythe’s World War I poster, And They Thought We Couldn’t Fight; 13 copies of Alonzo Earl Foringer’s The Greatest Mother in the World, also from World War I; and 12 copies of Jes Wilhelm Schlaikjer’s Of the Troops and For the Troops, from World War II.

Meanwhile, many of the project details are still being worked out, Rohal said.

First, the Army is systematically asking each of its museums to review its collection and report what it wants to keep, what it is unsure about and what is excess, he said.

Some have already begun the process.

The Yuma Proving Ground Heritage Center, at the Army weapons testing range in Yuma, Arizona, is one, according to the project schedule. The centre has among other things a rare 1950s-era atomic cannon. “We are not moving the atomic cannon,” Rohal said.

Artefacts that are deemed excess will be further reviewed by subject experts.

Items then marked for “divestiture” would made available through federal disbursement programs to places like the Smithsonian Institution and the National Park Service, as well as state museums, non-profit museums, municipalities and educational institutions, he said.

“That’s really our hope and goal, is that it gets to another museum or educational institution,” he said.

And private individuals and collectors?

“That’s one thing we’re still trying to work through,” he said.

“There are further rules and restrictions particularly on anything that has an offensive or defensive capability,” Rohal said. “Small arms, or knives, things of that nature, can’t get out to the general public other than through controlled programmes.”

As for “macro” artefacts, “tanks, vehicles, howitzers, cannons”, the Army Museum Enterprise is tracking about 7,000 items like that, and checking for duplicates.

But the Army’s Tank-automotive and Armaments Command would handle any donations, Rohal said.

“They have a screening process for those specific types of assets,” he said. “There are institutions that (can make) requests through that programme.”

But a donated tank, for example, can’t move under its own power and must have the gun barrel filled with concrete and the hatches welded shut, according to the command’s website.

Available items that go unclaimed could be destroyed or recycled, or put up for auction or sale, via a contractor.

One day last week, Rohal, along with Chief of the artifact collection Paul M Miller, and Artefact Registrar Lindsey M Davis, showed examples of excess items at the Museum Support Center, where the project is being tested.

The things the Army has the most of are insignia, Miller said. “Shoulder sleeve insignia, distinctive unit insignia,” he said. “It’s a huge segment.”

The centre has drawers full of them, some famous, some not so famous. One drawer held several copies of the eagle and arrow patch of the 734th Regional Support Group, an Iowa Army National Guard outfit.

There are also thousands of rifles, especially the legendary M1 Garand from World War II. “Simply because of how many were produced,” Miller said. “And they had a long life … even after World War II.”

How many need to be kept is being pondered, he said.

A staging room has been set up with shelves of items already found to be excess and ready to go. “Coats, pants, coveralls, caps, hoods, everything,” Davis said.

The World War II officer’s boots sat on a top shelf. They were laced up and had leather leggings with straps.

They were “nonstandard”, Miller said. “Officers would typically purchase their own uniform pieces … They could procure cooler, fancier-looking footwear.”

Even so, these weren’t rare.

The officer’s dress hat from the early 1900s had an eagle embroidered in gold on the crown, and golden oak leaves on the peak. A label inside read: “The MC Lilley & Co Manufacturers of Military and Society Goods. Columbus, Ohio.”

But the hat’s owner was unknown. The fabric had been gnawed by insects. And “we have a lot of these already in the collection,” Rohal said.

“Even with some of these condition issues, this may be valuable to another museum,” he said. “This is a great example of something that we’re trying to get out there.”

Much more has yet to be reviewed – flags, buttons by the bagful, mattresses, rope. “There’s probably great pieces in here that we’re absolutely going to retain,” Rohal said.

“We have to inventory 100 per cent of all our things every two years,” he said. “Each bag of buttons, each patch, each little pin … It’s a lot of work, a lot to go through. That’s why this a multiyear project. This is a lot of stuff.”