Anwar failed to be PM because he imagines people love him but they don’t: Mahathir

THE STRAITS TIMES – Opposition leader Anwar Ibrahim’s repeated attempts to become prime minister have failed because he thinks he is loved by the public, said former premier Dr Mahathir Mohamad.

He said this was the reason that Anwar, who is also the president of Pakatan Harapan (PH) and Parti Keadilan Rakyat (PKR), failed to secure the majority to form the government.

“He imagines that the people love him, but actually, they don’t.

“This is why he has never succeeded in his attempt to become the prime minister,” said Dr Mahathir during a meeting in Kampung Pandan on Monday.

Asked if he held grudges against several political leaders who were not seen to be aligned with him, Dr Mahathir said he looked solely at their ability to serve the people. 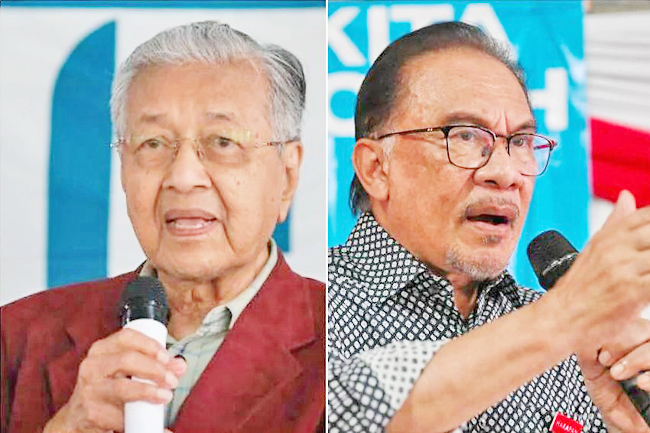 He cited his decision to appoint Abdullah Ahmad Badawi as his deputy prime minister.

“He (Abdullah) supported Tengku Razaleigh Hamzah in his contest (for the United Malays National Organisation (UMNO) presidency then) against me.

“Despite this, I still gave Abdullah a chance to serve as my deputy,” said the former two-time prime minister.

Meanwhile, in Bagan Datuk, Anwar said he wanted to be a leader for all the people and show that he has principles.

“Perikatan Nasional (PN) keeps saying I am too close to Democratic Action Party (DAP), but then it accepts Gerakan?

“If I become prime minister, I will (take) the best Malays, Chinese and Indians to be with me,” he said in response to PN chairman Muhyiddin Yassin’s comment after a PH campaign tour on Monday.

“I would rather be called ‘PM tepi’ (prime minister on the sidelines) than be known as a leader who steals money from the people and country,” he said, referring to the term used on him by detractors for failing to become prime minister after the February 2020 Sheraton Move and subsequent political upheavals.