In 2019, the archaeological ruins of the centre of power and belief of an early regional society, which existed in the lower reaches of the Yangtze River in the Late Neolithic period of China, were inscribed on the list of UNESCO World Heritage Sites.

People today marvel at the exquisite jade items uncovered amid the Archaeological Ruins of Liangzhu City in Zhejiang province, the legacy of a society that excelled in water conservancy and rice cultivation.

Although it dates back 4,300 to 5,300 years, the Liangzhu site resonates with Chinese people today despite that broad span of time as the influence of its key cultural elements has endured through the millennia.

“It is a physical testimony of the 5,000-year-old civilisation in China,” said archaeologist Wang Wei, a researcher at the Chinese Academy of Social Sciences’ Academic Division of History. “More importantly, it may contribute to drafting a new definition of civilization in the world.” 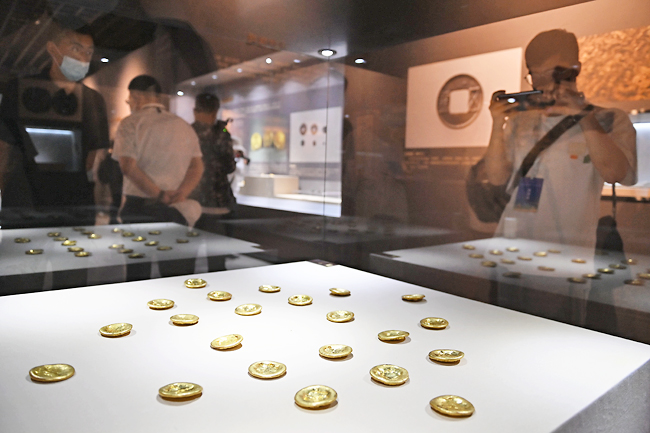 Chinese archaeologists are sparing no effort to better trace the country’s rich history through well-organised excavations. Over 8,800 excavations were conducted in the past decade, and telling stories of traditional Chinese culture through archaeological findings has stepped into the spotlight.

The Political Bureau of the Communist Party of China Central Committee has held two group study sessions on archaeology, one in September 2020 and the other in May this year.

At these meetings, President Xi Jinping highlighted the importance of archaeology and urged further efforts to advance the study of the history of Chinese civilisation so its achievements can help the nation strengthen its cultural confidence.

Apart from Liangzhu, a long list of key achievements in deciphering the early stages of Chinese civilisation have been made in the past few years, including the discovery of magnificent 4,000-year-old “palaces” in the stone city ruins of Shimao in Shaanxi province, the rigidly-designed urban road network of Henan province’s Erlitou site, the capital city of a central dynasty from about 3,500 years ago, and the fruitful findings in the 3,000-year-old Sanxingdui site in Sichuan province, where an astonishing gold mask and breathtaking bronze wares were uncovered.

“The recent studies have enriched our understanding of how our civilisation started,” said director of the Institute of Archaeology at the Chinese Academy of Social Sciences Chen Xingcan.

“That will greatly help to build up an academic system of archaeology with Chinese characteristics.”

The long course of the nation’s history is being charted by the revelations brought to light by Chinese archaeologists’ shovels.

Monumental discoveries have continually emerged in recent years, including the 2,000-year-old tomb of Marquis of Haihun in Jiangxi province, Nanhai One, a fully loaded shipwreck from the Southern Song period (1127-1279) off the coast of Guangdong province, and the recent discovery of a one-million-year-old human skull fossil in Hubei province.

A long list of successful TV shows featuring archaeology and cultural relics have hit Chinese screens in the past decade. Some of the recent findings have been written into school textbooks.

In 2020, livestreaming broadcasts of an annual appraisal meeting of the country’s top 10 archaeological discoveries attracted an audience of 28 million. The excavations at the Sanxingdui site have become a cultural phenomenon with the public lining up to view them in 2021 and this year.

“Archaeology is no longer in an ivory tower,” Wang added. “Wider exposure of our work has ignited people’s passion for traditional Chinese culture.”

Over the past decade, museums have become popular destinations in China, especially for the young generation.

Since 2012, the number of tourist visits to the Palace Museum in Beijing, which is also called the Forbidden City, has increased sharply.

Before the COVID-19 pandemic, the number had risen to 19.33 million in 2019. Last year, Sanxingdui Museum in Guanghan, Sichuan province, made headlines many times and became a popular destination. The museum situated in a small city known for its bronze wares of interesting shapes, such as masks with bulging eyes and big ears, received about 1.5 million tourist visits in 2021.

Director of Hubei Provincial Museum Fang Qin said that visiting museums is becoming a routine leisure activity, just like going to movie theatres. Ten years ago, there were few visitors to the museum, he said.

In July, Fang livestreamed a show about the Shijiahe group of late Neolithic sites in Tianmen, dating back 5,900 years, which attracted about 10 million viewers.

“I could never imagine 10 years ago that museums could be so popular,” said the 53-year-old.

The number of museums in the country has increased to 6,138 this year from 3,866 in 2012. Most of them are free to the public, according to a news conference held on October 8 in Beijing introducing the development of China’s culture industry. The number of tourist visits grew from 560 million in 2012 to 1.2 billion in 2019.