THE WASHINGTON POST – By 2012, President Barack Obama and much of the American public had given up on any prospect of victory in Afghanistan.

But the soldiers of First Platoon, part of the Army’s famed 82nd Airborne Division, were still out on patrol, wondering why they were there.

They had shipped off to war expecting to battle Taleban fighters, build schools and protect innocent villagers from the ravages of a merciless enemy.

Instead they set off on daily foot patrols through fields seeded with buried bombs.

The missions seemed designed to provoke a Taleban attack. Once fired at, United States (US) troops could shoot back and kill the otherwise shadowy enemy.

“Stir the pot. Shake it up. If necessary, take fire”, is the way an officer describes an average day in Afghanistan in Annie Jacobsen’s book First Platoon: A Story of Modern War in the Age of Identity Dominance.

The infantrymen had another task in 2012: to collect fingerprints, iris scans and DNA from their living and dead combatants.

The First Platoon soldiers told Jacobsen that their commanders seemed inexplicably obsessed with gathering biometric data from the enemy, a process called “battle damage assessment”, or BDA. Often they were asked to gather the biometrics while still under fire.

“Iris scans from dead Taleban? Half of them didn’t have any heads left,” observed Private First Classes Sam Walley. 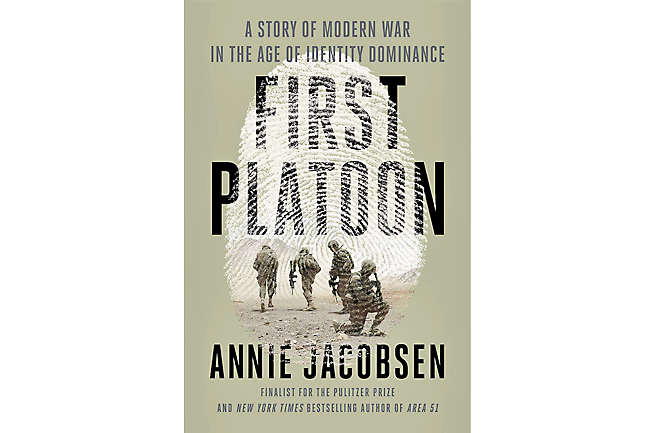 Jacobsen traced the obsession back to the Pentagon, where senior officials had alighted on a new strategy to win the stalemated war. The brass dubbed it ‘Identity Dominance’, a massive effort to gather biometric information on virtually all of Afghanistan’s military-age men.

“By the time First Platoon set up its Alaska tents inside Strong Point Payenzai’s fortified walls, the war in Afghanistan had become about the quest for identity,” Jacobsen wrote.

“The Joint Chiefs of Staff were now fixated on the idea that the ‘discovery of true identities’ of insurgents could turn the tide and win the war.”

Once the US military had insurgents’ biometric data, the Pentagon reasoned, it would be easier to link them through their DNA or fingerprints to attacks on US troops and then arrest or kill them.

One is about the two dozen or so soldiers who made up First Platoon and suffered through a crushing deployment that included casualties, carnage and a leader who ordered them to commit war crimes. First Lieutenant Clint Lorance took command of First Platoon in late June 2012, shortly after the unit’s initial leader was wounded.

During his three short days at the helm, Lorance averaged a war crime a day, a military jury later found.

On his last day before he was stripped of his command, he ordered his troops to open fire on three Afghan men standing by a motorcycle on the side of the road who he said posed a threat.

He served six years of a 19-year prison sentence before US President Donald Trump pardoned him in November 2019. Jacobsen brings empathy, compassion, compelling writing and some truly dogged reporting to this first story.

The book’s second story is a dystopian tale that seeks to document the ways in which biometric and surveillance technology, developed for the Afghanistan war, is being abused by the Pentagon, US law enforcement and government leaders in China. This ambitious and potentially alarming line of reporting often feels rushed and thin.

The story of First Platoon begins with its deployment to a remote district of southern Afghanistan that was the site of some of the war’s heaviest fighting.

When the platoon leader was wounded by a buried bomb, Lorance was sent to lead the men, though he had no combat experience. His soldiers hesitated when he first ordered them to open fire on the three men who approached on the motorcycle.

“Why aren’t you shooting?” Lorance demanded, according to testimony at his trial.

A US soldier shot and missed. The motorcycle carrying the three men, none of whom appeared to be armed, came to a stop.

The puzzled Afghans were now standing next to the stopped motorcycle, “trying to figure out what had happened”, according to one soldier’s testimony. They waved to some Afghan soldiers who were accompanying Lorance’s troops.

Another US soldier opened fire, killing two of the three Afghans. Lorance then sought to cover up his crime by telling his troops not to collect biometric data on the dead.

So it was somewhat surprising when John Maher, Lorance’s lawyer, built his appeal around biometrics. Maher said his legal team plugged the names of the three men on the motorcycle and a fourth Afghan who witnessed the attack into the Army’s classified biometric database.

The results, he insisted, showed that at least three of the four men were Taleban fighters.

The revelation was dismissed as irrelevant by a military appeals court, but it got big play on Fox News and was critical in persuading Trump to pardon Lorance.

Using documents painstakingly retrieved through Freedom of Information Act requests, Jacobsen shows that the evidence Maher used to sell the pardon to Trump was sloppily assembled and almost certainly wrong.

The names that Lorance’s legal team plugged into the military database were relatively common. Although the four Afghans had names that were similar to those of known Taleban fighters who had left DNA or fingerprints on bombs used to attack Americans, they weren’t same men or they weren’t Taleban, according to the Army.

In one case, Jacobsen shows that one Taleban member, whom Lorance’s lawyers insisted was killed near the motorcycle by their client on July 2, 2012, was arrested by US forces 21 months later and could not be the same person.

Another was a member of the Afghan police and, according to the Army, probably “contaminated evidence as part of his (police) duties”.

Even after Jacobsen informed Maher of his mistake in September 2019, two months before Lorance’s pardon, Maher continued to push the false information to the president, Congress and average Americans who were duped by the bogus biometric information into making donations to help pay for Lorance’s defence.

“Do either of you feel regret or remorse that you portrayed murder victims as Taleban bombmakers?” she asked the lawyer. Maher’s dismissive response is infuriating. He didn’t deny the accusation. Rather he asked her not to “insult him”, according to Jacobsen.

Just as crushing is the fate of the First Platoon soldiers. Last year I wrote about the platoon’s struggles with the war, the crimes and their aftermath for The Washington Post.

Since returning home in 2013, five of the platoon’s two dozen soldiers have died from suicide, cancer, a drunken car crash, a PTSD-fuelled gunfight and a blood clot caused by a battlefield wound. At least four others have been hospitalised following suicide attempts or struggles with drugs.

Jacobsen spent hours on the phone with James Twist, a First Platoon soldier, Michigan state trooper and father of three young children before he died by suicide in October 2019, just three weeks before Lorance walked free.

“Everything good we did ended up getting destroyed,” he told Jacobsen.

Jacobsen stumbles in portraying the US military’s efforts to biometrically track military-age Afghans as the centrepiece of the war effort. She quoted the Pentagon’s Defense Science Board, an influential advisory group, as telling then-Defense Secretary Donald Rumsfeld, “The (Global War on Terror) cannot be won without a ‘Manhattan Project’-like tagging, tracking, and locating programme for national security threats.”

But the effort, which envisioned using biometric data to identify and then kill or arrest the elusive enemy, was always more of a sideshow than a centrepiece of the Afghanistan war.

Other US intelligence assets, such as drones and eavesdropping technology, were far better at finding the enemy; but even they weren’t good enough.

By 2008, US commanders had begun to acknowledge that they would never be able to arrest or kill enough Taleban fighters to win the war.

Instead, they embraced a strategy that was predicated on helping the Afghans build competent security forces and a functioning government that could win the backing of the Afghan people and hold off the Taleban.

Jacobsen is even less convincing in her prediction of a dark future in which the biometric and surveillance technologies developed for Afghanistan are used by US law enforcement to track the activities of law-abiding American citizens. She cites as evidence PredPol, a company that boasts of its ability to use mountains of data to predict criminal behaviour before it even happens. “The behaviours that a hunter-gatherer uses to choose a wildebeest versus a gazelle are the same calculations a criminal uses to choose (to steal) a Honda versus a Lexus,” the company’s co-founder is quoted as saying.

The company, according to Jacobsen, already has contracts with more than 60 US police departments. Still, its boasts come off as completely non-sensical when juxtaposed with the US military’s experience in Afghanistan.

Jacobsen is right to sound the alarm about the dangers associated with the modern surveillance state. But the real legacy of the Afghanistan war for the US probably isn’t the dystopian future she predicts. It’s the struggles of the men of First Platoon and others like them, which she so ably documents.