THE WASHINGTON POST – At the opening of Katie Kitamura’s intense, unsettling new novel, Intimacies, an unnamed narrator has left New York in a fugue of grief and signed a one-year contract in The Hague. “I rode the tram without purpose and walked for hours at a time,” she tells us, “so that I would sometimes become lost and need to consult the map on my phone.”

This woman knows no one in The Hague, which allows her to concentrate more than she might like on the legendary city with its “veneer of civility.” The harder she looks, the more she sees beneath the “docile surface” of the streets. Her insistent perception – the real action of this novel – is her greatest skill and her riskiest vulnerability.

Intimacies is very much a story that seems to be something familiar but soon morphs into something disorientingly strange. Soon after arriving in The Hague, the narrator begins dating a handsome man named Adriaan. Little has been articulated, but much assumed between them. “There was already a certain amount of routine to the way we were together,” she says. “That regularity had many possible meanings and was difficult to interpret, at times I thought it was the expression of an intrinsic ease between us, some deep familiarity superseding our many differences.”

One of those differences is that he has a wife and family.

As a single woman in a foreign city presuming on the unspoken plans of a married man, she knows she’s in a precarious position. That wariness, though, is not enough to keep her from falling in love or moving into Adriaan’s apartment when he goes to Lisbon to see his estranged wife. Adriaan says he plans to ask for a divorce. But then his calls become more infrequent, and his trip to Lisbon is inexplicably extended another week. And another…

For a smart woman hyper-alert to the nature of language, Adriaan’s oblique, infrequent text messages create a crazy-making predicament. But the narrator’s attention to the subtlest inflections of communication is not merely a personality trait; it’s the central qualification for her job: She’s an interpreter working at the World Court. 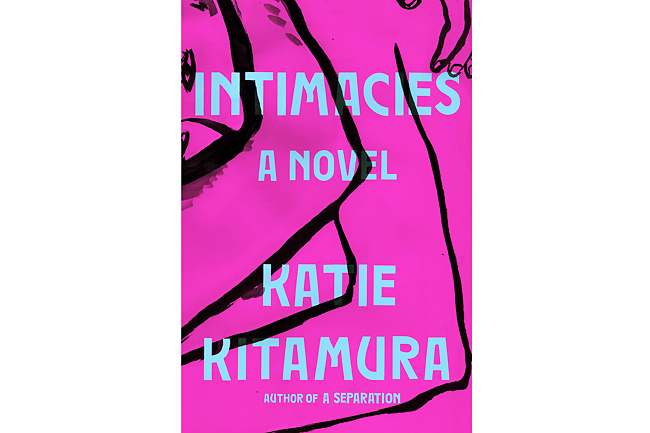 The incongruity between her domestic life and professional life is what makes Intimacies so fascinating. While the narrator is trying to figure out what’s going on with her boyfriend, she’s spending all day working on a trial that’s generating headlines around the world. The former president of a war-torn African country has been apprehended and brought to The Hague to answer charges that he committed crimes against humanity. (Think Charles Taylor or Laurent Gbagbo.) For reasons the interpreter cannot fathom, the former president’s defence team has requested her personally. His chief lawyer offers a chilling compliment: “He likes you.”

The former president, like the narrator, is never named, an omission that emphasises their fraught and peculiar relationship. “My job,” she says, “is to make the space between languages as small as possible.” And as we learn more, we understand just what kind of psychological demands that process of translation involves in this setting.

Although the narrator is horrified by reports of the former president’s atrocities, her work requires her to draw so close to this elegant monster that she can inhabit his mind. During victims’ testimonies, she must attend to every bullet, every drop of blood, every scream. “Linguistic accuracy was not enough,” she says. “Our daily activity hinged on the repeated description – description, elaboration, and delineation – of matters that were, outside, generally subject to euphemism and elision.”

To ensure a fair trial, the interpreter believes she must engage in an act of intimacy analogous to love but essentially obscene. “Out of what I can only describe as an excess of imagination, he became the person whose perspective I occupied,” she says of the former president. “It was disquieting in the extreme, like being placed inside a body I had no desire to occupy. I was repulsed, to find myself so permeable.”

Through parts of this story, Kitamura is exploring impossibly remote territory; few of us will ever have any contact, let alone close contact, with someone who committed crimes against humanity. Her narrator’s experiences in the translation box raise some of the same questions as Edna O’Brien’s novel The Little Red Chairs, which imagines the life of a woman briefly infatuated with a man she doesn’t realise is Radovan Karadzic. But with her Jamesian attention to the slightest movement of bodies and words, Kitamura keeps Intimacies rooted to the ordinary domestic experiences of her narrator, her petty jealousies, her passing suspicions.

The effect is a kind of emotional intensity that’s gripping because it feels increasingly unsustainable. Who could endure that raw-nerve sensitivity to the power of language to love, to deceive, to promise, to kill? Kitamura pulls us through a rising panic of hyper-awareness until the story’s fever finally breaks with a note of hope and relief. But that can’t quell the novel’s reverberations, which expose something incomprehensible about the moral dimensions of modern life.