The Macan T is the first four-door sports car to bear the special “T” or “Touring” designation, which was previously reserved for the 911 and 718 models. The letter T has represented a unique form of dynamic driving at Porsche since the 1960s, earned by models that offer an especially authentic driving experience thanks to precise tuning, exclusive equipment and efficient engines.

“More focussed on performance while still retaining its DNA of luxury and comfort, the Macan T is a thrilling addition to the model line, which has been extremely popular with local Porsche enthusiasts ever since the market launch in 2014,” said Porsche Brunei General Manager Lahiru de Silva at the unveiling.

“With the addition of the new Macan T, we hope to delight even more customers,” he added.

The new Macan T features a dynamic set-up and a two-litre, four-cylinder turbo engine, combined with an athletic design, and a range of standard equipment ideal for a sporty driving style.

The total package of great agility, low weight and a compact design that offers an ideal balance of weight and performance, positioning the Macan T between the Macan and the Macan S. 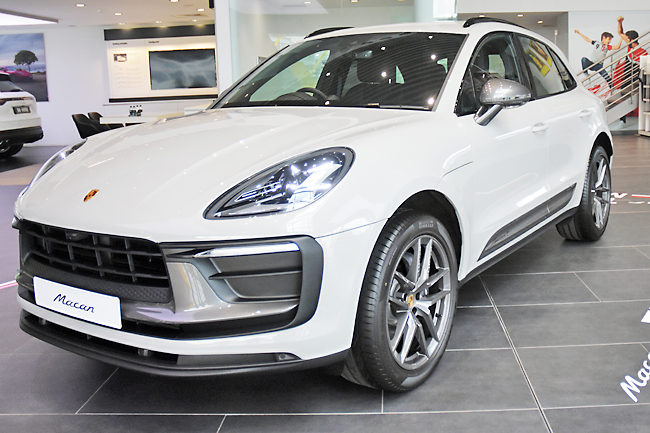 Compared to the 2.9-litre bi-turbo V6 engine in the Macan S and GTS models, the powertrain in the Macan T weighs 58.8 kilogrammes less on the front axle. This gives the vehicle excellent start-off performance and optimum cornering ability.

The Macan T also has an output of 195kW (265hp) and 400Nm of torque – allowing it to deliver an exhilarating drive. The engine is coupled with a fast-switching seven-speed dual clutch transmission (PDK) and the Porsche Traction Management (PTM) all-wheel drive system.

Meanwhile, a broad distribution of torque provides responsive acceleration in all driving situations.

When fitted with the standard Sport Chrono Package including the Mode Switch and Sport Response button on the steering wheel, the Macan T accelerates from zero to 100 kilometres per hour (km/h) in 6.2 seconds and reaches a top speed of 232km/h.

Design elements painted in Agate Grey Metallic on the front, flank and rear of the Macan T differentiates the vehicle from other models in the series.

The exclusive contrast colour can be seen on the painted front trim, exterior mirrors, side blades, roof spoiler and logos on the rear. The Macan T also sports tailpipes and side window trims in glossy black.

The interior of the Macan T has its own distinct ambience. The standard, eight-way electrically adjustable heated sports seats feature exclusive upholstery based on the black leather package.

The centres of the front seats and the outer rear seats are detailed with the Sport-Tex Stripe pattern and the front headrests each have an embossed Porsche crest.

The contrasting colour from the exterior continues inside the vehicle in the form of decorative silver stitching on the seats, headrests and steering wheel.

The Macan T also benefits from all of the new elements of the model generation revised in Summer 2021, such as the new centre console with its sophisticated glass look and touch-sensitive surface, as well as the fully networked Porsche Communication Management (PCM) system with a 10.9-inch touch screen and online navigation as standard.