THE WASHINGTON POST – The shortage of houses on the market led Mackenzie Jones to stop looking at resale properties and opt for new construction, even if it was a little farther out from Washington DC, than she planned.

“The bidding wars and competition for the inventory in the seller’s market was definitely something that drove me into looking for new construction,” said manager at a non-profit Jones, who began her search in the city but ended up buying a suburban townhouse. “I’ll continue to work in the city and do community work in the city.”

New construction has become the saving grace for a growing number of buyers drawn into the market by historically low mortgage rates fighting over a dwindling inventory of existing homes. That unfulfilled demand for resale homes is spurring a boom in the home-building market.

At the start of 2020, before the coronavirus pandemic, the home-building industry was projecting a three per cent nationwide growth in single-family houses. It ended up with a more than 10-per-cent gain in single-family construction, said Chief Economist at the National Association of Home Builders (NAHB) Robert Dietz. 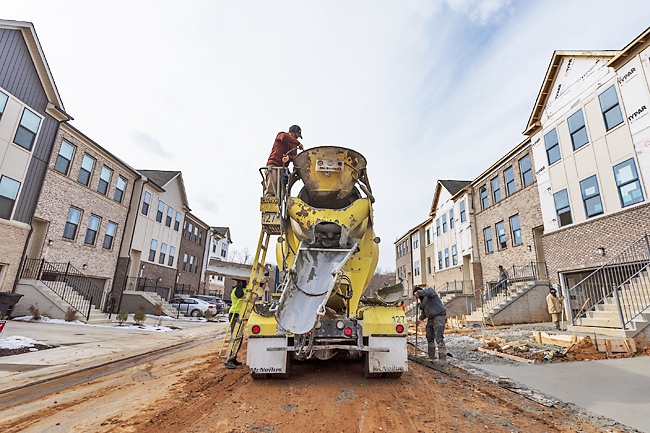 In December, the year-over-year supply of homes for sale nationwide reached a record low, dropping nearly 40-per-cent to just under 700,000 listings, according to a Realtor.com report.

Partner and Managing Broker at TTR Sotheby’s International Realty in McLean, Vancouver, and President of the Northern Virginia Association of Realtors Derrick Swaak said the number of homes for sale at the end of December in his jurisdiction plummeted 50 per cent to 60 per cent from five years ago.

“Part of the reason sellers are reluctant to list right now is not only because of the pandemic, but it’s also where are they going to go and how are they going to find their next home?” said President of the Greater Capital Area Association of Realtors Jan Brito.

But the historically low mortgage rates, spurred in part by a Federal Reserve move last spring to boost the economy through the purchase of mortgage-backed securities, has exacerbated demand. “Even in the midst of COVID-19, the market is on fire,” Gilbert said.

Home construction soared at the end of 2020. Housing starts, which measure the commencement of a residential project with the pouring of the foundation, overall increased 5.8 per cent to 1.67 million units in December, according to the Census Bureau and NAHB. Housing starts for single-family houses, which represented 1.34 million of that figure, rose 12 per cent, according to the report.

“The housing starts in December is the strongest home building since 1.72 million units were started in September 2006,” said Chief Economist at Moody’s Analytics Mark Zandi.

The industry has come a long way since the boom of the 2000s when developers created a housing bubble by constructing hundreds of thousands of houses on spec, expecting that eager buyers would snatch them up.

The bubble burst in 2008, sparking the Great Recession. At the low point of the recession in April 2009, only 480,000 units were built compared with 2.27 million in January 2006 at the peak of home building, according to Zandi.

The rebound in the aftermath was sluggish, as developers faced tightened credit and a depleted workforce.

Dietz said that credit has eased somewhat for home builders, while tightening for non-residential real estate development. “This was a positive surprise for the second half of 2020 for builders”, although he warned that the cost of credit is increasing.

Additionally, regulatory burdens remain, and lots have grown more scarce, which he said will be a looming challenge, especially in hot markets.

Still, builders of single-family houses are facing head winds from labour shortages and rising lumber costs. As a result, the NAHB/Wells Fargo Housing Market Index – a confidence metre for home builders – fell to 83 in January from 90 in December.

The NAHB Housing Opportunity Index notes that 16 of the least affordable markets in the nation are in California.

As they emerged from the Great Recession, builders found they could recoup their investment in the rising land costs only by focussing on high-end single-family houses and luxury multi-unit developments.

The inability to build houses for moderate-income buyers exacerbated a shortage of affordable housing across the United States (US).

In 2020, all parts of the home-building industry expanded, including housing for entry-level buyers, said Dietz.

Typically, new construction is purchased mostly by move-up buyers ages 35 to 55, Dietz said. Five years ago, the first-time buyer share of the new home market was less than 20 per cent; today it’s closer to 30 per cent nationwide.

“Entry-level construction is easiest, in a relative sense, in more affordable markets like the Southeast, Texas and the mountain states,” Dietz said. “Those happen to be the hottest housing markets in terms of home building for exactly that reason: It’s easier to build, keeping housing from become prohibitively unaffordable.”

Nevertheless, building entry-level homes is still challenging “because of issues related to fees, taxes and exclusionary zoning requirements that price out buyers from the market”, Dietz said.

Zandi said the growing supply of entry-level new homes falls far short of the number of the homes needed for the population of young families and to put a dent in the undersupply of affordable housing that has developed across the country over the past decade. “The shortfall is close to an estimated 1.4 million homes,” he said.

The pandemic is driving changes in both ends of the market.

Many high-end buyers, seeking more space inside and outside, have fled cities for suburbs and rural areas. Those buyers want two home offices, study areas for kids, state-of-the-art gyms and home theatres, said Derrick Swaak. Some of the hotter markets are farther out because builders have larger tracts of land and more efficiencies.

Principal in the Tysons office of KTGY Architecture + Planning Michael Medick said entry-level buyers are also moving farther out – not necessarily by choice. Many first-time buyers are still limited to the “drive until you qualify” inventory farther out from the city.

Zandi said he expects home building to continue to ramp up because of low mortgage rates and an improving job market post-pandemic. He forecasts that housing starts will increase from 1.38 million units in 2020 to 1.57 million in 2021 and 1.8 million in 2022. “House prices are rising strongly, giving home builders a strong incentive to build more homes,” he said.

Dietz said the demand for city living will return in the spring once the coronavirus vaccine is more widely available.

Although non-profit manager Jones decided to move outside of Washington, she said there is still a lot to do and explore in suburban Maryland. “I am looking forward to some of the more quiet spaces and having a little bit more room,” said Jones, who wanted a place spacious enough so she wouldn’t outgrow it and have to sell in five years.

Her new community, Watershed by Pulte Homes in Laurel, offers community amenities like a pool and gym, which she’s looking forward to enjoying once the pandemic is over, Jones said. She also likes the flexibility of her home’s layout.

“I like the privacy of the ground floor bedroom or potential home office, and the open floor plan of the main floor,” she said.