NEW YORK (AP) – Like many Americans, Karla Maldonado has been cutting back her spending to spare her wallet from rising costs: She is eating out less and attending fewer social events to curb the impact of high gas prices.

But the 26-year-old social worker of Portland, Oregon, hasn’t skimped on her eye makeup – the mascara, eyeliner and eyeshadow she typically wears to work just above her face mask.

“That’s something I can’t go without,” Maldonado said. And she doesn’t seem to be alone.

Many major retailers slashed their financial outlooks for the year after seeing shoppers pull back on many discretionary items in the latest quarter. But among the notable exceptions: beauty.

Target, Kohl’s, Macy’s and Nordstrom all highlighted strong sales of beauty items in their fiscal second-quarter earnings reports issued over the past few weeks.

Walmart, the United States’ (US) largest retailer, said that it’s seeing momentum in its beauty business, citing strong sales in cosmetics as well as skin and hair businesses.

Meanwhile, Ulta Beauty, the largest beauty retailer in the US, said sales spiked nearly 17 per cent in its most recent quarter, compared to the same period last year. 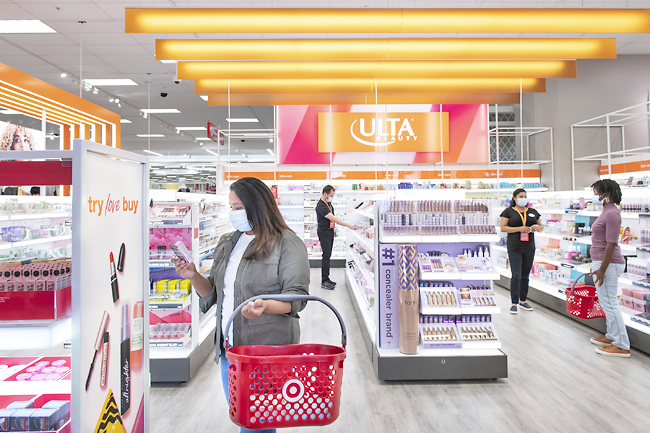 Americans, once stuck behind Zoom screens in the thick of the pandemic, are out and about and wanting to look their best. Co-workers – some meeting each other for the first time – are trying to make an impression. Meanwhile, people are going out on dates and getting together after months of pandemic-induced leisurewear and Netflix binges at home.

But another possible explanation for why beauty is thriving when consumers are more apprehensive about their spending is a long-held theory known as the “lipstick index”, which posits that lipstick sales rise during times of economic downturn.

The reasoning goes: When consumer sentiment declines, Americans seek escapism by looking for small ways to indulge themselves, such as by purchasing a new lipstick instead of pricier alternatives they can no longer afford.

For others, their version of lipstick might be a USD5 Caramel Macchiato from Starbucks, which reported record revenue in August for its fiscal third quarter.

The lipstick theory has held, though not always. Makeup sales spiked during the Great Depression and the recession in the early 2000s, but declined during the 2008 economic collapse, according to market research firm NPD Group.

The same happened during the early days of the pandemic as Americans stayed home – or behind masks – and shifted their interests towards wellness and skincare as stimulus payments flooded bank accounts, helping balloon the savings of consumers who were already spending less on travelling or eating out due to pandemic lockdowns.

Now, makeup is roaring back. Americans have bought more eye, face and lip makeup – roughly two per cent, five per cent and 12 per cent respectively – in a year-over-year analysis of sales across stores, according to the market research firm IRI.

At Macy’s, CEO Jeff Gennette noted in an earnings call late last month that consumers have focussed on deals and cut back on purchases amid high inflation. Still, they managed to buy beauty products as well as travel-related items like luggage, shoes and clothes to wear to the office, Gennette said.

Meanwhile, Kohl’s reported that shoppers were making fewer trips, spending less per transaction and shifting toward value-oriented store brands. But at its Sephora beauty shops, launched last year as part of a partnership with the beauty chain, shoppers are spending freely on skincare, makeup and fragrance. “Customers are not willing to give up their beauty purchases,” Kohl’s CEO Michelle Gass recently told The Associated Press.

“People need to feel good at this time with so much pressure on them.”

The Sephora sales reflect broader findings released in July by NPD Group, which showed among 14 discretionary industries tracked by the group this year, beauty was the only category that saw a rise in sales.

However, the persistence of beauty at more prestige markets – such as Macy’s, Sephora and Nordstrom – is primarily being driven by high-income earners, or those with an annual salary of USD100,000 or more, according to NPD’s beauty industry advisor Larissa Jensen.

“While we’re all feeling these inflationary pressures, it has less of an impact on a consumer earning six figures than it does on a lower income consumer,” Jensen said.

Elsewhere, however, strong sales show Americans of all income levels participating in the uptick.

At Target, beauty enjoyed sales increases in the low single digits while home goods, clothing and electronics all suffered declines.

As a result, for the winter holidays, Target said it will be more cautious with its orders for discretionary merchandise but will lean on beauty as well as necessities like groceries.

Its competitor Walmart launched higher-end beauty areas in March in collaboration with British retailer SpaceNK, and it says those sections have performed well.

The retailer, which has been offering consumers select discounts, will hold a beauty event in September where customers can find deals at the store and online.

These wins, combined with low levels of price increases and supply chain issues, has made the beauty industry feel insulated from challenges in the wider economy, Jensen said.

“But there’s still so many things swirling around,” she warned. “And we need to be cognisant that things could change at any minute.”