THE WASHINGTON POST – About halfway through reading Wesley Morgan’s The Hardest Place: The American Military Adrift in Afghanistan’s Pech Valley, I drove south from my home in Dallas to spend the weekend hunting with a friend under whom I had served in the United States (US) Army’s 75th Ranger Regiment.

While my company of Rangers had been deployed to Iraq in the fall of 2003, this former commander of mine had taken the rest of our battalion to Afghanistan, where he was the first American officer to lead a large-scale assault into one of the Pech Valley’s northern tributaries.

Eighteen years later, and once the two of us had scared up the last of the quail we were likely to see that day, I asked this retired officer – one of the most thoughtful men I had the privilege to serve with – why he thought we had ended up staying in the Pech Valley for as long as we had. He replied that he didn’t know. “But,” he added, “I sure hope Wes’ book provides the answer.”

More than a decade ago, Morgan was an undergraduate at Princeton when he first got in touch with me – because he was planning a trip to Afghanistan and wanted some practical advice. I had deployed twice to Afghanistan but was in graduate school at the time. I remember being taken aback: Who the hell takes a break from college to visit a war zone? 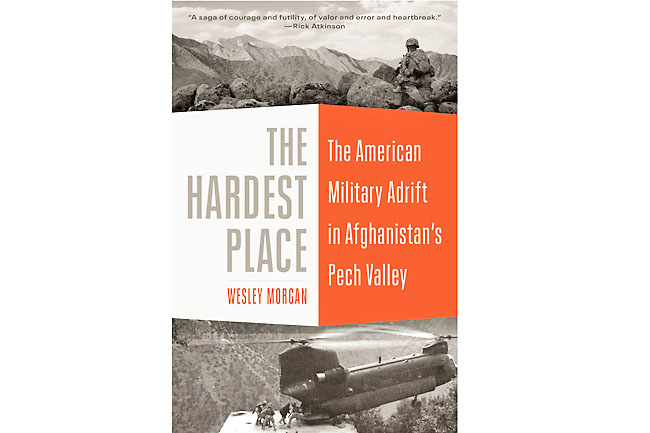 At the time, I figured that Morgan – with whom I have stayed in loose contact over the years, and met once – would end up joining the Army or the Marine Corps himself and, after serving a few years, would grow out of his obsession with the war. But he did neither: He became a journalist, and if anything, his interest in the war in Afghanistan grew into a fascination with our quixotic deployment to some of the hardest and worst terrain in that country.

Morgan began his career as a research assistant for the veteran New York Times and Wall Street Journal correspondent Michael Gordon. Gordon’s books on the Gulf War (The Generals’ War) and the Iraq War (Cobra II, The Endgame) stand out among other books published by journalists about those same conflicts: Sober if a bit dry, exhaustively researched, they resist the urge to be morality tales and allow readers to draw their own conclusions about the motivations and actions of the dramatis personae.

At the same time, though, these books are never quite neutral: They each ask hard questions of the US military and its civilian masters.

In The Hardest Place, his first book, Morgan writes in the same vein and with the same diligence. Over the past decade, he has managed to speak at what must have been considerable length with surely everyone on the American side – and quite a lot of Afghans as well. It shows: Because of the degree to which Morgan has immersed himself in both the people and the place, he is able to reconstruct nearly 18 years of war in this tiny valley on an almost week-by-week basis.

That has some disadvantages. The cavalcade of place names and unit designations might be a challenge for the non-specialist reader. More significant, though, I myself could never claim to be objective about many of the people profiled in The Hardest Place – men with whom I served either in uniform or in the Pentagon as a civilian, and many of whom I consider to be friends.

By the same token, I wondered at times, while reading this book, if Morgan had passed on fully interrogating the actions of the men he has clearly spent much time with. The former commander of mine confessed to me that when he was in Iraq, during the troop surge, he never felt like he had any real objectivity about his war: It is indeed very difficult for battalion and brigade commanders to know when they are winning, and it is equally hard for them to recognise when they are losing. Morgan strongly implies that commanders in the Pech Valley – among his best sources for the book – were doing more of the latter than the former, but he is rarely as explicit as the reader might like. He tends to let the men and their actions speak for themselves. “I never shed a tear in Kunar,” one commander told Morgan. “Now I have time to reflect, to wonder if I made the right decisions.”

Morgan’s diligence and immersion have advantages, too, though: He is attuned to the life of the infantryman in a way few journalists ever manage to be. He understands the vernacular, the acronyms and – importantly – the way popular culture interacts with real life.

This last understanding leads to one of the book’s more profound insights on the question of why the US military stayed in the Pech Valley as long as it did: Probably because war there was what war was supposed to look like.

Young men, myself included, have always been seduced and betrayed by the romance of war, and in the Pech Valley, it was no different. The Pech required of infantrymen what the French in World War I called ‘le cran’, or guts, and for young men who had been first exposed to war through its representations in popular culture, the fighting in the Pech just felt right.

Would the soldiers and their commanders have fallen for the valley in the way they did had it sucked a little less? Had the mountains been less steep or the enemy less cunning?

That, I would argue, is what helped successive military commands in Afghanistan justify pursuing some very narrow counterterrorism ends pushed by the intelligence community through a very expansive and inefficient counterinsurgency campaign. The fighting in the Pech assumed a logic of its own, and few people took the step back to ask whether it made sense anymore in the
bigger picture.

There were some good places to fight a counterinsurgency campaign in Afghanistan, I would argue, but the Pech Valley surely wasn’t one of them. I remember a conversation I had, years ago, with a Marine officer whom Morgan briefly quotes in the book.

This officer had grown up in the mountains of north Georgia, not too far from where I was born and raised, and reflecting on the Afghans of Konar province, he told me something I have since found to be true from Afghanistan to Lebanon to Maine, “Man, mountain people just want to be left the alone.”

People move to the mountains for a reason, and they will defend their valleys, and their culture, against any and all invaders. But oh, did the invaders ever fight as well: More than half of the Medals of Honour awarded in both Iraq and Afghanistan – 13 in total – were awarded for combat in Konar and Nurestan provinces.

Some of that combat is now reflected in popular books and films like Lone Survivor and The Outpost.

One wonders if future generations will conclude that the combat depicted in those dramatised books and films just feels right.

Those future generations would also do well to read Morgan’s book. There is no romance in it. Only a tragedy. Yet the book nonetheless ends with the American combatants looking back on the Pech Valley – and their war – with a little wistfulness.

It sure felt right.