American Sebastian Korda having a ‘super’ time at Wimbledon

WIMBLEDON, England (AP) — Sebastian Korda (AP pic below) is having a, um, “super” time at Wimbledon so far.

First and foremost, the 20-year-old American – part of a through-and-through sports family – won his debut at the grass-court Grand Slam tournament, eliminating Alex de Minaur 6-3, 6-4, 6-7 (5), 7-6 (5) after nearly 3 1/2 hours on Tuesday with some strong serving and an attacking style.

One of Korda’s older sisters, Nelly Korda, won her first major title at the Women’s PGA Championship last weekend to earn the number one ranking in women’s golf. The other, Jessica, is number 13.

Their parents, Regina and Petr, were pro tennis players: mom was ranked in the top 30; dad won the 1998 Australian Open and was the runner-up at the 1992 French Open.

“It’s super special having my dad here. We don’t travel that often together, but whenever we do, it’s really special,” the younger Korda said. “And especially here at Wimbledon, it’s super cool.”

Korda, who turns 21 next week and is based in Bradenton, Florida, finds participating in his first Wimbledon “super exciting”. 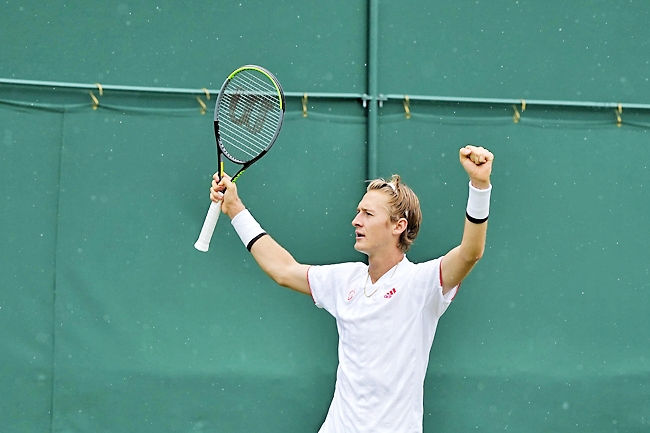 His father, who was at Court 17 to watch his son beat a player coming off a grass-court title last week, was “super happy” – although “he also sees the mistakes that I did during the match and he lets me know right away.”

It’s “super cool” that his siblings are going to compete at the Tokyo Olympics — although Korda said he hasn’t made a decision yet.

Sebastian and his father got “super emotional” and were “super happy” while watching Nelly win her title the other day, which was “super cool”.

I PLAY FOR ME

The chair umpire at Benoit Paire’s loss at Wimbledon on Tuesday thought the Frenchman didn’t exactly give 100 per cent effort.

The fans agreed. As for Paire? He said he doesn’t care.

Paire received a code violation for unsportsmanlike conduct for lack of effort and was heckled by a fan as he strolled through the final set in his first-round defeat against number nine seed Diego Schwartzman of Argentina.

The 32-year-old Paire didn’t really seem all that interested in the proceedings after losing his serve to begin the third set when the match – suspended late Monday – resumed with Schwartzman ahead 6-3, 6-4.

He lost the next 12 points, often striking the ball into the net. Then, down 5-0 and 30-0, he received the code violation from chair umpire Mohamed Lahyani.

Paire walked to the sideline and sat down, telling Lahyani to “call the physio”.

“Benoit, you cannot play like this,” Lahyani responded. “I told you do your best. I’m not going to call a physio for this.”

During this exchange, someone in the crowd called out to Paire: “You’re wasting everybody’s time.”

Paire returned to the court and let out exaggerated grunts as he hit the ball. Schwartzman won the next two points for a 6-0 final set, which lasted 16 minutes.

Lahyani is the umpire who made headlines at the 2018 US Open when he climbed out of his seat to encourage Nick Kyrgios during a match.

Afterward, Paire was unapologetic when asked about the fans’ reaction to his play.

“I do not care about the people. I play for me and that’s it. I do not play for people,” the 46th-ranked Paire said. He said he was trying his “best”. Paire said it’s a struggle to live the bubble life.

“I just try to stay in the bubble … to stay in my room, to do my COVID test even if I’m vaccinated,” he said. “I disagree with everything here. I like the tournament. When I (started) on the tour, I said I don’t like the tournament. I really like it now. But the thing I don’t like is how they treat us – like ‘stay in bubble’ – and everybody is out in the city. I don’t understand.”

Players and their entourages must stay at a hotel during the tournament instead of area homes because of the All England Club’s attempt to create what it is calling a “minimised risk environment”, with COVID-19 testing and a “track-and-trace programme”.

Carla Suárez Navarro declared herself the happiest player at Wimbledon – and that was
after she lost.

The comment was understandable and poignant: The 32-year-old Spaniard returned to the All England Club after being sidelined for more than a year to undergo chemotherapy treatments for Hodgkin lymphoma.

A former top 10 player, Suárez Navarro announced in April that she was cured, and later said this will be her last year on tour. She said on Tuesday she still plans to retire after the US Open.

That makes this her last Wimbledon. She bowed out with a loss against Ash Barty on Centre Court, but not before pushing the number one seed to a third set. The score: 6-1, 6-7 (1), 6-1.

“A lot of emotions. Not easy, but I really enjoyed (it),” Suárez Navarro said. “I cannot ask for anything else better than this day.”

Suárez Navarro was two points from defeat in the second set when she rallied, but the match slipped away when she lost the first 13 points of the final set.

“I’m trying to do my best,” she said. “I know what I have to do to win the match, but my body is not the same (as) two years ago. When I spend time on court, I feel tired.” Barty joined the crowd in applause as Suárez Navarro left the court.