THE WASHINGTON POST – After Jonathan Strange & Mr Norrell was published in 2004 its author, Susanna Clarke, went mostly silent. Hopeful readers wondered what happened to Strange and Norrell next, and only in 2020 did Clarke return with a new, slim novel, Piranesi, which didn’t answer the question.

Clarke’s long absence (due to illness) got us thinking of other authors who published ambitious works of science fiction or fantasy but then, for one reason and another, fell off the radar – and whose other books deserve a new look.

Silvia: Walter Tevis seems, at first, an unlikely candidate for obscurity. His works were adapted into famous movies, including The Color of Money or The Hustler. But he is only back in the public’s mind thanks to the recent adaptation of The Queen’s Gambit. Mockingbird, which garnered a Nebula nomination, is set in a dystopian future where people have forgotten how to read. It’s a little 1984, a bit Fahrenheit 451, and it somewhat resembles WALL-E, if Disney had included a suicidal, melancholic android. Tevis also wrote The Man Who Fell to Earth. Though Queen’s Gambit has a new tie-in paperback edition, Mockingbird is hard to find in print form.

Tanith Lee was a literary great: She was the first woman to win the British Fantasy Award for a novel. I loved her Secret Books of Paradys, a series of Gothic, interlinked stories set in an alternate Paris, but she worked in all kinds of modes. Alas, she eventually had trouble selling her work. Her titles came out from smaller and smaller presses and were difficult to find. Lee died in 2015 and recently DAW/Penguin began reissuing her catalogue. You can now find titles such as The Birthgrave, Electric Forest and Sabella.

Lavie: One book I want to introduce is by the Japanese author Chiaki Kawamata. Death Sentences (translated by Thomas Lamarre and Kazuko Y Behrens) is like a collaboration between Philip K Dick and Dali: It concerns a forbidden surrealist poem that transports readers to another reality. You can find similar artifacts in the Japanese Ring franchise or in Tim Powers’ marvelous Medusa’s Web. But this is something else: part meditation on art, part mystery and part pure hallucinatory transcendence. And Kawamata’s love of the surrealists (Breton and Duchamp are characters in the book) shines through. But it was published by a small academic press, went unnoticed by readers in the West and is to date the only novel by Kawamata to be translated. It’s also worth mentioning the great work done by the imprint Haikasoru to bring Japanese science fiction to the English-speaking audience. Hiroshi Sakurazaka’s All You Need Is Kill (the basis for the Tom Cruise-Emily Blunt film Edge of Tomorrow), Project Itoh’s Harmony, Taiyo Fujii’s Gene Mapper and Kazuki Sakuraba’s A Small Charred Face haven’t gotten the audience they deserved. 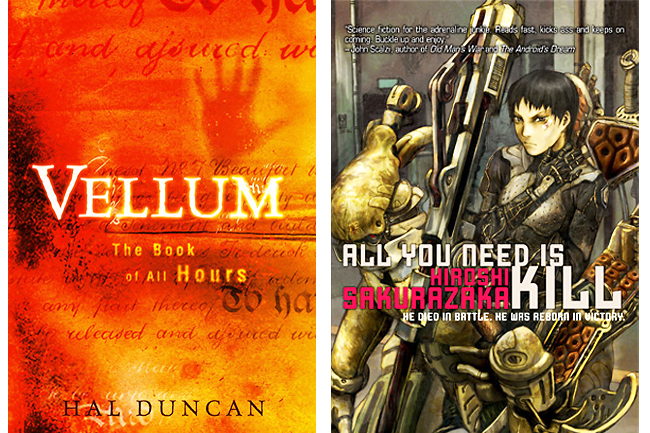 Turning to Britain, I think of Hal Duncan, who burst onto the genre scene with Vellum in 2005. It was going to be huge, only it wasn’t. That’s a shame: It’s an intricate, layered, dazzling performance of a novel that seems to me, in hindsight, somewhat ahead of its time.

Duncan followed up with a sequel, Ink, but subsequent books were published only in the small press. Then there’s Jan Siegel, whose Prospero’s Children (1999) I thought was going to become a fantasy classic. It is quintessentially British fantasy in the tradition of Alan Garner or John Masefield, about a young witch discovering her power in a rural house that is more than it seems, and just might be linked to ancient Atlantis. It will remind you of the works of Patricia McKillip in the best possible way.

Silvia: Charles R Saunders died last year. His rip-roaring sword and sorcery novel Imaro came out in 1981. Sadly, the African-inspired world he created in that series didn’t make quite the splash that might have been expected. His work was reissued in 2006 by Night Shade books and a new collection, Nyumbani Tales, came out from small press MVmedia in 2018.

A few years ago I included a story by Saunders in a Lovecraftian anthology I edited. Through the Lovecraft fan scene I also had a chance to meet WH Pugmire, whose decadent, lush prose seems to have been confined to the specialised press circuit, meaning collections of his work are pricey.

It’s easier to find stories he contributed to anthologies such as Cthulhu Fhtagn! or The Book of Cthulhu.