Indonesian artiste Andmesh Kamaleng said his first visit to Brunei Darussalam has been “amazing”, highlighting the warm and friendly people he met.

Andmesh, while sharing this in an interview during a recent visit, expressed his hope to visit the country again.

The month of August was, for me, the month of weddings, with family and friends sending invitations that filled my weekends.

One wedding, though, stood out as it saw the surprise appearance of the groom’s family friend – Indonesian star Jeandmesh Antonio Kamaleng, better known as Andmesh Kamaleng.

As one of his fans, I recognised his voice as he walked into the wedding hall. The hall went quiet for a while, until our eyes were focussed on the big screen confirming the singer’s presence. I excitedly reached for my phone.

Andmesh rose to fame as the winner of the second season of Indonesian reality programme Rising Star Indonesia, which aired on RCTI in 2017. 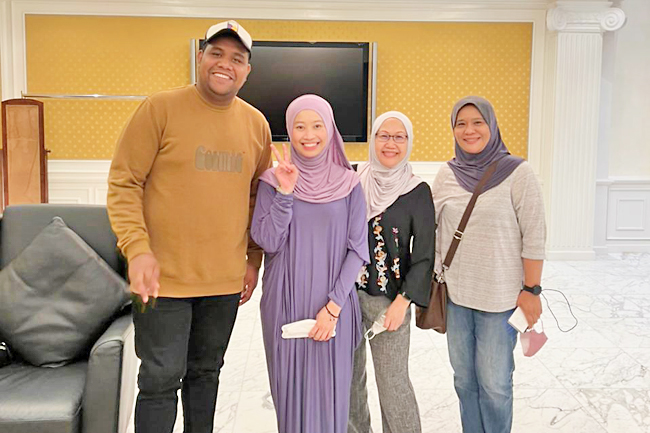 Over the past four years, Andmesh has been making a name as a newbie in the Indonesian music industry and his hit songs have crossed borders, including Brunei.

I was told that Andmesh, or “Ame” as he likes to address himself, was invited to simply attend the wedding, but the singer decided to surprise his friend with a special gift – performing for the bride and groom, much to the enjoyment of everyone present.

Ame sang his hit songs Hanya Rindu and Cinta Luar Biasa towards the end of his performance, which had us all singing along, while some took selfies with him as he made his way around the hall.

I approached Ame for an interview, but discovered that he had to leave early as he was flying off the next morning to perform in Jakarta the same day.

After talking to the people involved in the wedding, I snagged the chance to talk to him at the airport just before his departure.

Ame said his very first visit to Brunei was “exceptionally amazing”, as he met many warm and friendly people.

He said within minutes of his arrival, he had already made friends who ended up being close.

He also noted that seeing Bruneians who knew and greeted him was touching and unexpected, as people recognised him and approached him for a photo opportunity.

“Last night the feeling was really amazing as the wedding guests sang along with me, particularly when I sang Cinta Luar Biasa – it made me very happy and delighted.

“It made me look forward to coming back here again, to perform, to meet my fans and have more time to explore this beautiful and peaceful country.”

Giving an update on his career, Ame said he will release his latest single, Lagu Galau, early next month.

He said the song is about heartbreak, love and moving on.

He also revealed that he plans to do an album next year.

On the music industry in Indonesia, Ame said it is both very supportive and competitive, as there are many talented musicians.

“To survive in the industry, one needs to constantly innovate as new musicians emerge every day on social media,” he said.

However, having a long career in the industry requires bringing out the best of work in songs.

“I also hope and wish that the music industry here in Brunei will be able to grow positively and produce more local artistes to be able to represent the country at international level,” he added.

“It is my personal hope to produce my best works in my career and for Brunei to continuously support your local artistes who are extraordinarily talented.”

Andmesh Kamaleng will perform his first solo concert in April next year and welcomes Bruneians to visit Jakarta and watch it.

“I hope to be able to come back and meet the good and friendly people here,” he added.