All about the hustle

Growing up while teaching himself the ways of an entrepreneur from an early age and having a keen interest in the concept of operating a business, Fakhrul – better known as Cruel The Barber – found inspiration from observing pioneers of the local barbershop industry.

With belief in himself and a knack for picking up skills quickly, Cruel began operating and welcoming clients in 2016 to Hoodchops, a home-based barbershop outside his own humble abode.

“Hoodchops is very personal as it represents who I am. It’s where I cater to men’s needs in terms of appearance,” said Cruel, explaining the concept of his barbershop – a space where people can come and converse while getting their haircut to discuss and talk about a range of topics like education, sports, business, and just vent.

Reminiscing about his early days before opening his doors, Cruel said it was borne out of curiosity.

“I borrowed money from my mum to get a clipper and just tried it out on my brother, because at first, I just wanted to test it out,” said Cruel. It was also the realisation that the niche market and demand for barbershops in the country is stable which made him want to start operating his own barbershop. He said men have a tendency to go for a haircut once every week or two. 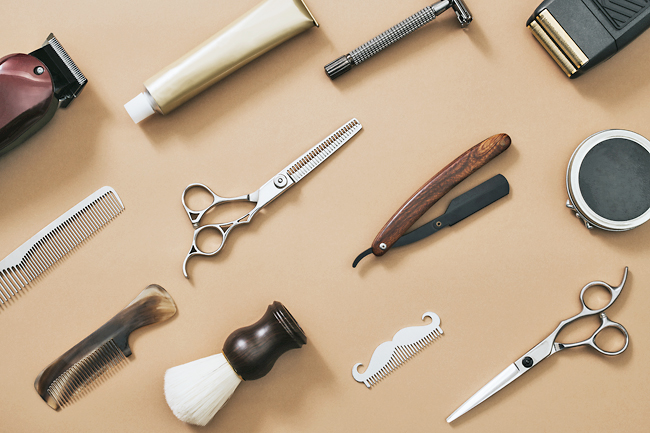 Cruel recalled the handful of barbershops that specialise in men’s haircuts just five years ago, with a majority of men still opting to go to salons back then.

He believes that barber shops offer more than just hair cutting. “It boosted my interest because there are more details when it comes to this,” said Cruel.

With no schools teaching individuals to cut hair, Cruel said everything was based on learning from YouTube videos and continuous practice to gain experience in order to improve, on top of sharing sessions.

“We go through different scenarios, different haircuts, head shapes, trial and error, and also a few barber shop seminars a few years back before COVID-19 by a Filipino barber,” explained Cruel when talking about the various ways he sharpened his skills. “With barbering, the more you practise, you’ll get better at it. The foundation of cutting hair is basically the same. It’s just going through different head shapes and hairstyles that will teach you.”

As the country faced multiple waves of the pandemic in the past two years, the local barber shared that his biggest struggle during that time was when people grew fearful of meeting with others. As a result, he had to close his barbershop for three to four months.

“As an entrepreneur, you survive based on profit. During that time, it was a 50-50 for me.

It was a struggle, but at the same time, I did something about it.”

Not wanting to be passive and dwell on the struggle, Cruel managed to create a ‘Zoom Gunting’ project during the first wave, which saw him direct and teach people how to cut their own hair at home through hands-on instructions he gave out via the Zoom application.

In persevering further during that period, he also carried out an online seminar with an Indonesian barber.

“The biggest takeaway is to not give up because an entrepreneur will always have its ups and downs. Be smart and knowledgeable on how to go through the rough patches,” said Cruel.

He believes that being an entrepreneur teaches a person how to be creative, persevere and not give up, so it’s important to not just sit and wait without taking action.

“That’s the biggest mindset to have in order for you to survive in this entrepreneurial world. Dedication and hard work have taught me how to be that kind of person.”

As many individuals, especially youths, struggle to find employment, the local barber was not one to wait for the traditional route of an office job and instead chose to venture into finding other sources of income.

“I don’t want to rely on job opportunities all the time because I’m a hustle kind of guy. I always survive on working and making money,” said Cruel. He believes it’s important for youth to start being entrepreneurial in their own ways so that they do not have to rely on their parents while doing something they like.

He sees flexibility in being an entrepreneur. By having the right directions, management, and being structured with your finance and business, I think you can survive. In the end, it’s about being smart.”

He went on to say that if a person believes in their product or service, they should carry on with it. If they believe they can make income out of it, they should stick to it and be their own boss, instead of depending on somebody else.

He also believes it should start early – just after secondary school or university.

“Create your own jobs. That’s basically what I’m saying,” he said.

As for future plans, Cruel hopes to expand his horizons to open a bigger barbershop branch along with a barber institution to teach people the skills to get some side income.