JERUSALEM (AP) – The Al Jazeera news network published an image of the bullet that it said killed its veteran reporter Shireen Abu Akleh while she was covering an Israeli military operation in the occupied West Bank last month.

It identified the bullet as a United States-(US) made 5.56mm round fired from an M4 rifle, commonly used by Israeli forces. The Israeli military said Palestinian militants use the same ammunition.

The military released its own image of sacks of bullets it said were confiscated in a raid last month. The bullets in the two images appear identical, with green marking on the tips.

Al Jazeera did not say how it obtained the purported image of the bullet, which is held by the Palestinian Authority. The picture shows what appears to be a curved, spent bullet in a clear plastic container labelled with a red marker.

An Associated Press reconstruction of the shooting supports accounts by Palestinian witnesses that Abu Akleh was shot by Israeli forces, but did not reach a final conclusion. Al Jazeera and the Palestinian Authority (PA) accused Israel of targetting her, something Israel denies.

The Israeli military said she was killed during a complex military operation in which troops traded fire with Palestinian militants. It said only a sophisticated ballistic analysis of the bullet could determine whether it was fired by an Israeli soldier or a militant.

The PA said it has overwhelming evidence that Israel was responsible and refused to hand over the bullet for analysis or cooperate with Israel. Its own investigation found that she was killed by a 5.56mm round fired by a Ruger Mini-14 semi-automatic rifle.

Israel said it identified the army rifle that could have fired the fatal round but would need to analyse the bullet to reach any firm conclusion. It has not provided details about the rifle. 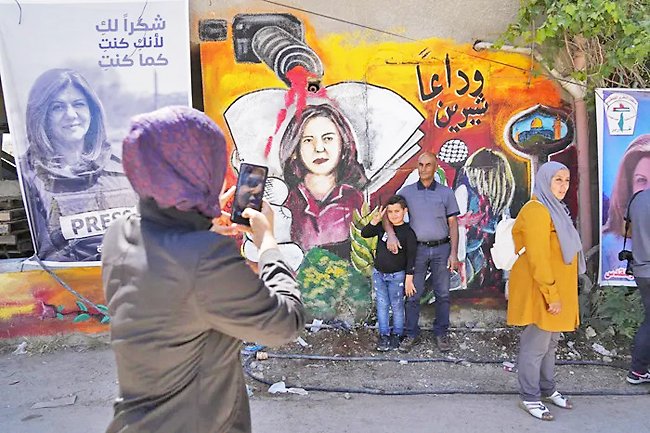