BATANGAS, THE PHILIPPINES (CNA) – When the Philippines’ second most active volcano Taal erupted in 1965, Teodora Caraig, born and brought up on Volcano Island, fled but returned a year later. She went on to raise her children and grandchildren on the island, which sits on a lake and surrounds the crater of Taal Volcano.

These days, the 85-year-old prefers not to think of the island.

Volcano Island was once home to generations of families like hers. They made their living fishing, farming and guiding thrill-seeking tourists around an active volcano – one of 24 in the Philippines.

Taal roared to life in 2020, forcing hundreds of thousands to leave their homes.

“Our house, all our belongings are under heaps of ash,” Caraig told CNA from the emergency tent that she and her children have lived in for the past year. 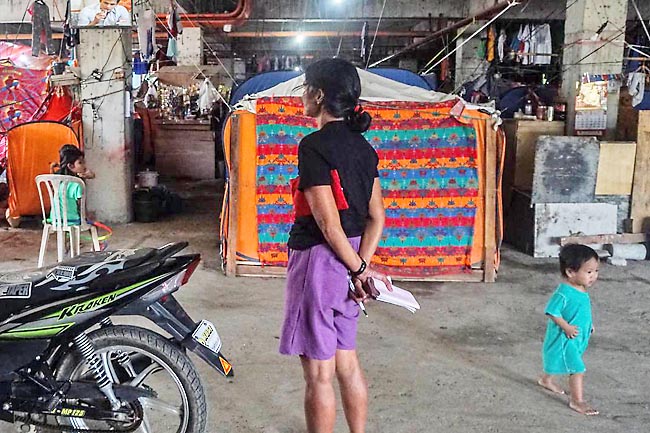 On January 12 last year, Taal’s continuous eruption created a steam-laden column up to 15 kilometres high and spewed ash which fell more than a hundred kilometres away in the capital region Metro Manila.

Residents fled in droves, as the state-declared danger zone expanded from seven kilometers to 14 kilometres in a matter of hours. But before that eruption on January 12, Volcano Island had already been declared a permanent danger zone.

After the 1965 eruption, residents still had homes to return to, recalled Caraig. Not this time. There are hints of vegetation a year on, but for the most parts, what was once lush green land is now a cold grey.

Caraig said life on the mainland, away from Volcano Island, still takes some getting used to. “Everything here is bought,” she said, when asked how her family set up the bamboo poles that held up the roofed open-air extension to their emergency tent.

It’s a far cry from the self-sufficient lives they once led – food from the crops they grew, water fetched from the lake. Solar panels provided electricity, and their fish pens were near the shore so small, non-motorised boats were all they needed.

Now, to get by, they sell home-cooked snacks to mainland villagers. The evacuation site housing Caraig and her children was meant to provide temporary shelter, but like hundreds of former Volcano Island residents in similar sites, they face permanent displacement from the island they once called home.

According to government data, almost 870 people displaced by the 2020 eruption are still in temporary evacuation centres in Talisay town, Batangas province. The estimates are conservative, as these figures pertain to centres located in one town alone.

In one such temporary evacuation site, partition tents have been set up on what would have been the car park of an unfinished building. The ground floor car park is practically open air, with only one of four sides walled.

At 55, fisherman Romeo Laluz, born and raised on Volcano Island, has been unable to find work on the mainland matching his skillset. His younger counterparts have fared slightly better, working in construction and drawing weekly wages.

With few options, Laluz has gone back to what he knows best, venturing to the lake every morning to a fish pen his family set up near Volcano Island. This brings in USD10 a week, six times less than what he used to earn on the island before Taal erupted.

“Our livelihoods on Volcano Island before were good. Tourists would come and we would ferry them back and forth as boatmen. Income was good before the eruption,” he said.

Laluz’s expenses have also gone up. Now, he has to buy fuel for motorised boat trips each time he heads out to his fish pen. Water and electricity, previously provided by the lake and solar power, are also extra bills he has to contend with.

Laluz said he makes between USD4 and USD6 on a good day. But sometimes, there is no income.

“Depends on your luck that day,” he quipped.

The Laluz family now live in a government housing project in Balete town, southeast of Volcano Island, set up before the eruption.

The monthly instalment for the house started at USD6 and will increase gradually to a possible USD30. It will take Laluz 30 years to pay off the house. “I would be dead by then,” he said ruefully.

The monthly payments are just one of the family’s many financial worries, said Mercy, Laluz’s wife. The family enjoyed a small reprieve when the instalments were suspended after the eruption, but only for a year.

“We started paying again on January 5, but we have no stable income. We used to get it from the island,” Laluz said.

“We had a livelihood on the island, but we are no longer permitted to return,” she added. “My children are still in school and not working.”

As the family’s sole breadwinner, Laluz works hard to provide for his wife and children, two of whom are in college.

“I worry what will happen when I’m gone. My children can find jobs. But I labour each day for their education, so they don’t end up like me who didn’t finish school due to poverty,” he said.

Laluz’s children help out occasionally when he heads out to fish. But he will not allow any of them to work full-time before they graduate college, no matter how hard it gets for him, so that they are not tempted to drop out of school.

“I remind my eldest to finish school and not to marry too soon, so he can help his siblings and the family. Just to help give our family some relief. We don’t need to be rich. Just a little relief such that I no longer need to cross the lake each day to fish, since I am also of age,” he said.

Still, despite the hardship, Laluz can consider himself lucky, having secured proper housing before the eruption. Those who came after him have had to make do with tents and temporary structures.

Fifty-five-year-old Editha Malapitan and her extended family live in one of these tents in Balete. They depend on the generosity of their neighbours – the ones who live in actual houses – for basic necessities like water, electricity and even toilet facilities.

Donations, which went some way to alleviate the hardship, plummeted during the COVID-19 pandemic, she said. “It’s hard living here. Sometimes we have no money, no food,” she lamented. “When it rains, sometimes we get wet. But, of course, we put up with it. There’s nowhere else to live.”

The women that CNA spoke to said they have even fewer opportunities for work on the mainland. With the meagre takings from their husbands’ fishing as capital, they sometimes sell cooked snacks to supplement the household income.

One of Malapitan’s nephews asked when they would return to Pulo – the term locals use to refer to Volcano Island. The adults laughed, and then fell silent.

“We tell the kids we can no longer go back to Pulo, as there is nothing there,” said Malapitan. “Everything is buried. Our house there no longer stands. Washed out. Our animals, our belongings. We weren’t able to get any of them.

“We left the island with only our bodies and the clothes we wore.”