After fighting for Ukraine, Lomachenko fights again in ring

NEW YORK (AP) — When Ukraine was invaded, the only fight Vasiliy Lomachenko (AP; pic below) would consider was the one for his home.

Boxing plans were put on hold, even though they appeared set to include a title match. Lomachenko calls being undisputed champion his dream, but his country’s war with Russia is real life.

“I couldn’t understand anything about what’s happening militarily,” Lomachenko said through an interpreter, “but inside you, you have a feeling of what you need to do”.

Now he’s resuming his career, starting tonight in the Hulu Theater at Madison Square Garden against unbeaten Jamaine Ortiz in a bout that will stream on ESPN+.

Win, and Lomachenko (16-2, 11 KOs) could move on to another chance to fight for the lightweight titles he once owned. But either way, first he’s headed back to Ukraine, which he believes is secure enough now to allow his family to return home this week after staying with him in California while he trained. 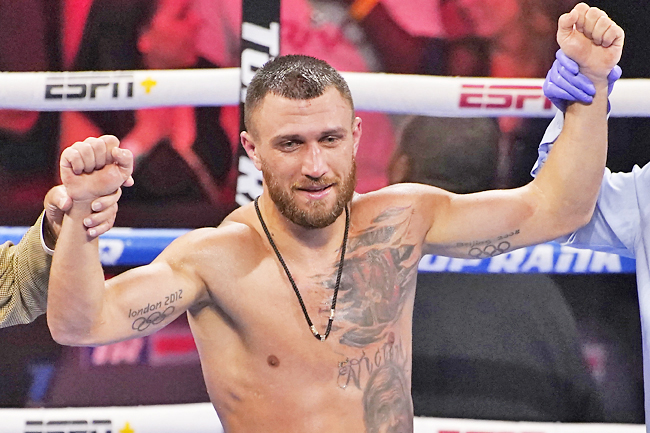 Nobody was sure that would be the case when Russia launched the invasion in February. Lomachenko was in Greece at the time, with an expected fight against then-lightweight champion George Kambosos Jr being planned for later in the year.

He went back to Ukraine and joined a territorial defence battalion, telling his advisers he would be unavailable to take that fight.

“When this was happening, when this started, nobody really knew anything about anything,” Lomachenko said.

“And when you really have no understanding about what’s going on, every normal person, every normal citizen would go and defend his country and that’s what the majority of men do in our country.” For Lomachenko, that meant being part of a team that enforced a 10pm curfew, patrolling the streets to make sure there were no cars in sight.

After about a month of that, he was trained to take part in several other duties.

“No military operations, but certain tasks,” Lomachenko said. “For example, a suburban area in the outskirts of the city that we needed to go out and do some reconnaissance, make sure that no alien people, no one unknown is basically located in that area.”

Lomachenko is one of Ukraine’s greatest athletes, a two-time Olympic gold medallist who compiled a 396-1 record as an amateur.

After turning pro, he won a title in his third fight and was a champion in three weight classes after his 12th.

He eventually owned three lightweight belts before losing them to Teofimo Lopez in October 2020.

Two straight wins following shoulder surgery had him on the path back toward a title shot before the war.

Lomachenko was given breaks during his service to train, so he doesn’t believe his time away will affect the rhythm and footwork that are among boxing’s best.

Ortiz (16-0-1, 8 KOs) doesn’t expect to see slippage from the fighter the Worcester, Massachusetts product has sparred against.

“I think the opponent in front of you brings out the type of fighter you are,” Ortiz said, “and I think Lomachenko is going to bring out the best Jamaine Ortiz, the fighter that everybody around me in the gym and in New England and where I come from knows”.

With Lomachenko unavailable, the Australian instead fought Devin Haney and dropped them in a lopsided decision, then lost the rematch two weeks ago by another wide margin.

Lomachenko doesn’t fret about the opportunity that was lost, just as he doesn’t wonder what if about the fight with Lopez. That was originally expected to take place in the spring of 2020, perhaps in what would have been a packed Madison Square Garden, where Lomachenko is 5-0.

Instead, it was pushed back months because of the coronavirus and held in a mostly empty setting in Las Vegas after a nearly 14-month layoff for Lomachenko. Maybe things would have been different without the pandemic. “I don’t have any regrets at all,” he said.

“Everything happens the way they’re supposed to happen.”

Nor does he worry that the likelihood of regaining the belts will be tougher now that Haney has them. Lomachenko is small for the 135-pound weight class and would have to beat a skilled, naturally bigger man, similar to Lopez. “The sweeter the victory shall be,” said Lomachenko, with a smile.