KANDAHAR, AFGHANISTAN (AFP) – Once the epicentre of the Taleban’s iron-fisted extremist government, Kandahar city in Afghanistan’s restive south is slowly transforming into a vibrant urban centre dotted with bustling cafes, co-ed universities – and even a women’s gym.

Every evening, young men head to the Arena club, a trendy cafe in the city of 700,000, to play snooker, watch football on a big screen, or smoke shisha “hubble-bubble” pipes – unthinkable when the Taleban-ruled Afghanistan from 1996 to 2001.

“There was no such place in Kandahar when we built it and there is still no other such place in the (entire) south,” said the 30-year-old owner of ArenaNazir Ahmad.

But the city’s youth fear such hard-earned freedoms are on the verge of being lost again as the Taleban ramp up attacks in their former heartland despite peace talks with the government.

The public floggings and executions in the city’s squares still haunt residents, but Kandahar has undergone a huge transformation.

Women can now be seen riding side-saddle on the backs of motorcycles, families enjoy group picnics, and several city spaces have illuminated fountains that spring up at sunset while street vendors serve hot Afghan dishes into the night.

Despite that progress, the Taleban are emboldened after a deal with Washington that secured the withdrawal of all foreign forces by May 2021, and they have stepped up their campaign against Afghan forces in rural areas. Afghanistan now faces the very real prospect of handing back some power to the insurgent group that United States-led forces have been unable to defeat for 19 years. 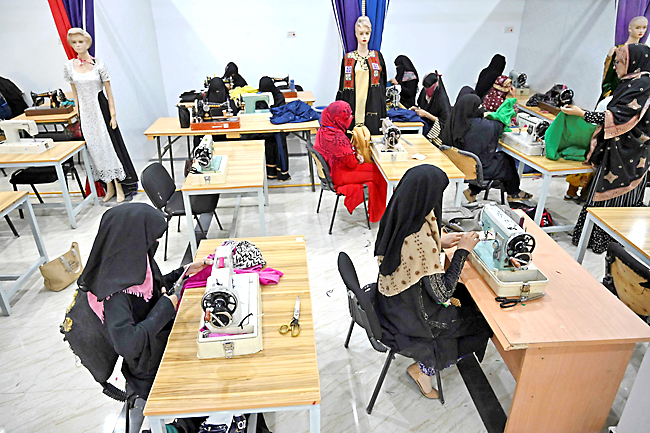 The group already claims to control or contest more than half of the country, including large swathes of territory across southern Afghanistan.

Kandahar city remains firmly in the control of government forces, but the Taleban are on the doorstep.

“I hope the Taleban have changed and will let this club remain open,” Ahmad told AFP.

In the city’s upscale AynoMaina neighbourhood, loud laughter rings out from the Cafe Delight, another trendy spot.

The cafe allows entry to women customers – something still uncommon in the city.

“What kind of peace would it be if they closed down our cafe?” asked owner Mohammad Yasin.

“We will not comply if the Taleban tell us not to accept female customers.”

When the Taleban-ruled Afghanistan, girls were banned from school and women accused of crimes such as adultery were stoned to death at sports stadiums.

But since their ousting, women have made significant progress in cities, entering the workforce in ambitious positions in the media, politics, and even the security forces.