KABUL, AFGHANISTAN (AP) – The National Museum of Afghanistan is open once again and the Taleban, whose members once smashed their way through the facility destroying irreplaceable pieces of the country’s national heritage, now appear to be among its most enthusiastic visitors.

The museum in southwest Kabul, which hosts artefacts from the Paleolithic period to the 20th Century, re-opened just over a week ago for the first time since the Taleban takeover of Afghanistan in mid-August amid the chaotic withdrawal of United States (US) and North Atlantic Treaty Organization (NATO) troops.

Its director, Mohammad Fahim Rahimi, and his staff have so far been allowed to continue in their positions although they, like many of Afghanistan’s civil servants, haven’t received salaries since August. Only the security guards have changed, Rahimi said, with Taleban now replacing the police contingent who used to guard the building and providing women security guards to check female visitors. Currently about 50-100 people visit the museum each day.

Power cuts are frequent and the museum’s generator has broken down, leaving many of the exhibition rooms plunged into darkness. On Friday several Taleban, some with assault rifles dangling from their shoulder, were among visitors using the lights of their cellphones to peer into display cases of ancient ceramics and 18th-Century weapons.

“This is from our ancient history, so we came to see it,” said Taleban fighter Mansoor Zulfiqar, a 29-year-old originally from Khost province in southeastern Afghanistan who has now been appointed as a security guard at the Interior Ministry. 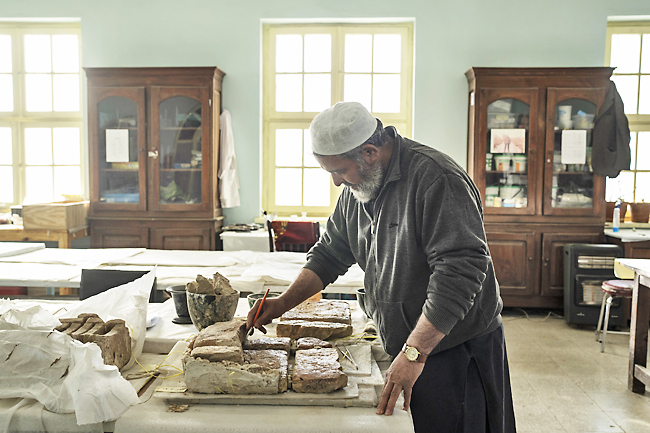 “I’m very happy,” he said of his first visit to the museum, marvelling at his country’s national heritage.

Zulfiqar said he had spent 12 years in Kabul’s notorious Pul-e-Charkhi prison, Afghanistan’s largest. While there, he said, someone had told him about the museum and he dreamt of the day when the Taleban would rule Afghanistan again and he would be able to visit the museum.

But when Zulfiqar was just a boy in 2001, the Taleban ransacked the museum, smashing priceless statues. One of them, the remnants of a limestone statue believed to be of a king dating from the 2nd Century, stands at the entrance to the museum building, now restored by experts from France and the museum’s own restoration department.

As the Taleban swept through Afghanistan this summer, taking province after province, there were grave concerns that a similar fate awaited the country’s cultural heritage, especially anything from pre-Islamic times. So far at least, this has not appeared to be the case.

Saifullah, a 40-year-old Taleban member from Wardak province and teacher in a madrassa, an Islamic religious school, said he believed the 2001 destruction of artefacts in the museum had been carried out by lower ranking Taleban members without orders from top-ranking officials.

Touring the museum for the first time, Saifullah, who goes by one name, said he would encourage his students, some of whom were now guards at the museum itself, to visit the National Museum of Afghanistan.

“Generations can learn from this, and what we had in the past,” he said. “We have a rich history.”

Perhaps Afghanistan’s new rulers now agree with the inscription engraved on a plaque outside the museum building’s entrance: “A nation stays alive when its culture stays alive.”