THE WSHINGTON POST – In his new book Keep Sharp: Build a Better Brain at Any Age, Sanjay Gupta starts with bad news. About 47 million Americans have some evidence of preclinical Alzheimer’s disease, which means their brains show signs of adverse changes, but symptoms have not yet developed. By 2060, one new case of dementia will be diagnosed every four seconds.

Yet Gupta, who is CNN’s Chief Medical Correspondent and a practising neurosurgeon in Atlanta, is quick to tell readers that fear of dementia should not be the reason to read the book. Instead, he writes, “it should be the knowledge that you can build a better brain at any age”.

Keep Sharp is largely a self-help book, but Gupta devotes the first 100 pages or so to the science of the brain and dementia.

At the outset, he takes care to distinguish between dementia, which is a broad condition of functional impairment from cognitive decline, and the specific form of dementia known as Alzheimer’s disease, which accounts for more than half the cases of dementia.

Gupta does some interesting myth busting. For instance, he assures us that dementia is not necessarily an inevitable consequence of old age, that older people can in fact learn new things, and that doing the daily crossword puzzle is fine but flexes only a portion of your brain. 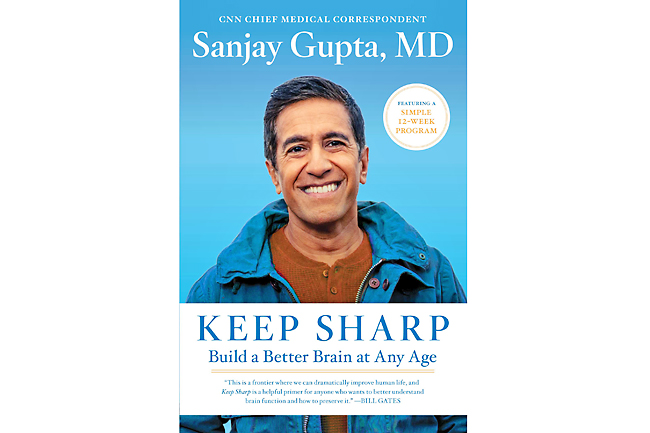 The book’s main thrust is prevention. Put simply, Gupta writes, “clean living can slash your risk of developing a serious mind-destroying disorder, including Alzheimer’s disease, even if you carry genetic risk factors”.

Because dementia takes root decades before it is diagnosed, the earlier you start your prevention regimen, the better. To that end, Gupta lays out a 12-week “sharp brain” programme, consisting of exercise, healthful eating, a bedtime routine, sound sleep, relaxation, intentional socialising, yoga, even a gratitude journal.

Gupta presents himself as a model, and as such he’s asking a lot of his readers. Somehow, he finds time every day to exercise for an hour and to meditate. He avoids red meat, seldom snacks and dabbled in fasting, which has been shown in animal models to boost memory.

The most recent scientific study cited in the book is from late 2019, well before the coronavirus pandemic hit. While the most recent dementia studies might be too new to include, it’s a shame the book doesn’t note the widespread concern over the lasting neurological effects on those who have gotten sick from the coronavirus. Of those who have recovered from covid-19, roughly one in three have had lingering neurological problems, according to Stat, a publication covering health news. Gupta has reported at length on covid-19 for CNN, but no mention of the pandemic appears in the book. That’s too bad because this signal event is unlikely to vanish from anyone’s memory, short-term or otherwise.