In his titah at the Special Meeting of the Adat Istiadat Council yesterday, His Majesty said, “Brunei Darussalam is standing firm because of religion and the Adat Istiadat. Religion is upheld and the adat (custom) is valued. Both are interchangeable with our national identity. On the same basis as religion, the adat must be preserved.

“A nation with Adat Istiadat has prestige. Therefore, we must never relinquish the adat.

“Adat forms the main pillar of the institution of the monarchy and the nation. It should be supported and strengthened, instead of being left to deteriorate and fall into decline. Adat does not belong to any particular group, which is the royalty, but to the nation, where everyone is obliged to ensure that it continues to develop and stand out.

“In this regard, the vision of the Department of Adat Istiadat Negara is clearly to provide the public with knowledge and understanding on Adat Istiadat, while its mission is to perform Adat Istiadat ceremonies and inform the citizens and residents about Adat Istiadat as a cultural heritage.

“However, these efforts for development will require a leader as the planner and source for ideas, in addition to being a driving force.

“But if the leader is weak and lacking in ideas, then how can the organisation function effectively? This is what I see at present. We do not yet have a planner with brilliant ideas on how to empower the Adat Istiadat. Even upgrades, where necessary, are still not being implemented. It seems as though they are just waiting for instructions, without making any
proactive plans.

“This is in stark contrast to the role and responsibility of the Department of Adat Istiadat Negara in preserving conventions (adat resam) so that they remain acceptable, well-ordered and applied accordingly. 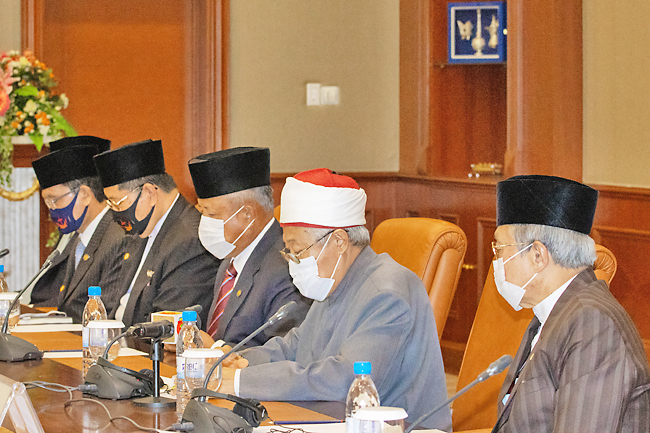 “It is also responsible for contemplating and planning schemes for overcoming any deficiency, weakness or fault so that our adat could thrive, become enriched, further refined and remain unique.”

‘‘They should not be concerned with matters outside of their own duties and responsibilities, such as pondering over the refurbishment of the Religious Teachers University College of Seri Begawan (KUPU SB). Regardless of whether it should be refurbished, there are other, more relevant parties to serve this purpose, not the Department of Adat Istiadat Negara and the Adat Istiadat Council.

“Similarly, the sprucing up of Bandar Seri Begawan with various projects is not the responsibility of the Department of Adat Istiadat Negara and the Adat Istiadat Council, when relevant parties are available for this.

“It is more important for the department and the council to fulfil their own duties and responsibilities, so that there will be no further occurrences of negligence or oversight.

“These need to be done in accordance with Adat Istiadat guidelines or standard operating procedures (SOPs) – if there are any – with precision and immediacy, instead of the delay which took place during the announcement of the royal death. The public had already learned about the news in advance.

“In addition to the delay, the announcement was left entirely to Radio Television Brunei.

“Similarly, the announcement on mourning attire caused a frantic rush among men to buy white cloth to line their songkoks, while women searched for white headscarves.

“The funeral management was also found to be improper, whereby the deceased was transported by an ambulance. Was this done in accordance with the guidelines from the Adat Istiadat?

“This is where the adat needs improving upon. If we do not want any improvements, then there is no need for us to have adat.

“Among the stated functions and responsibilities of the Department of Adat Istiadat Negara is providing assistance and advisory services to government agencies, non-governmental organisations, associations, and learning institutions on matters pertaining to Adat Istiadat.

“The question is, if the Department of Adat Istiadat Negara is unable to carry out its work properly, then how can it advise and guide other parties on an appreciation of the Adat Istiadat?

“By virtue of this, the Department of Adat Istiadat Negara will need to undergo self-evaluation to rectify its administration.”