SELFOSS, ICELAND (AFP) – On an autumn day on a lush green prairie, over a dozen pregnant mares are waiting to be bled for the last time this year.

This “blood farm” near Selfoss in southern Iceland is collecting blood from pregnant horses raised for the sole purpose of extracting a special hormone used in the veterinary industry.

The practice has had animal welfare groups up in arms ever since a shocking video of horses in Iceland being maltreated emerged on YouTube a year ago.

People working in the industry now insist on anonymity when speaking to the media.

“There is no way we can make the public understand completely this kind of farming”, said the 56-year-old owner of the farm near Selfoss. “The public in general is too sensitive.”

At farms like this one, several litres of blood are collected from each horse in order to extract the PMSG hormone (pregnant mare serum gonadotropin), also known as eCG, produced naturally by pregnant mares.

Sold by the veterinary industry, farmers use the hormone to improve the fertility of other livestock like cows and ewes. 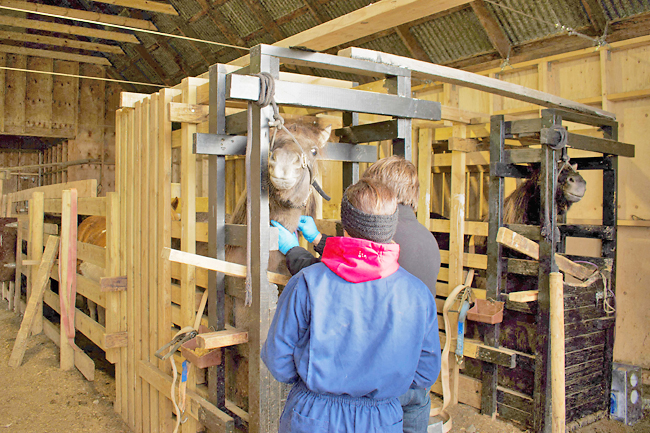 The foals are meanwhile usually sent to the slaughterhouse.

Iceland is one of the rare countries – to carry out the controversial practice, along with Argentina and Uruguay.

The video published last year showed farmhands beating and prodding horses with sticks, dogs sometimes biting horses, and the horses weakened after giving blood. Some of the horses could be seen collapsing from exhaustion after struggling against the restraints in their boxes.

The video caused a shockwave, both abroad and in Iceland.

At the farm near Selfoss, the mares stand in single file in a special wooden structure, waiting patiently for their turn to enter a box. Planks are placed around their legs to prevent them from moving and a halter is put on their head to hold it up.

“The horses… can get stressed, agitated. The restraints are basically to protect them” so they don’t get hurt in the box, said a 29-year-old Polish veterinarian, also speaking on condition of anonymity.

A local anaesthetic is first administered, then a large needle is injected into the jugular vein. Only a certified veterinarian is authorised to carry out the procedure.

The halter “allows us to see the vein properly because we need to know exactly where it is”, he added.

Up to five litres of blood are drawn from each mare in just a few minutes, in an operation they undergo weekly for eight weeks.

The blood collection, carried out from the end of July until early October, is profitable: the 56-year-old running the operation near Selfoss – who also works as an attorney – makes up to ISK10 million (USD70,000) a year from the business.

“In many cases, the mares show signs of short-term discomfort during the blood collection,” said a horse specialist at the Icelandic Food and Veterinary Authority (MAST) Sigridur Bjornsdottir.

But “this is not considered a serious change (of their condition) unless the symptoms are severe, extended, or the mare shows signs of chronic stress”.

In 2021, Iceland had 119 blood farms and almost 5,400 mares raised for the sole purpose of giving blood, a figure that has more than tripled in the past decade.

The PMSG hormone is turned into a powder by Icelandic biotech group Isteka, the biggest producer in Europe handling around 170 tonnes of blood per year.

The figure is likely to be lower this year, after the controversial video prompted some farmers to quit the business amid concerns about animal welfare activists.

“Farmers were severely hit and shocked by the video”, said Isteka managing director Arnthor Gudlaugsson. While he acknowledged there were problematic cases, Gudlaugsson said the video, filmed with a hidden camera, was designed “to give an overly negative description of the process”. The video did lead to a police investigation and the farms featured were identified.

MAST inspected Iceland’s blood farms this summer and “no serious deviations” were observed, and none were ordered to shut down.

The scandal also sparked debate in Iceland, where most inhabitants learnt about the practice for the first time even though it has been going on since 1979.

“This makes us think about where we stand in our ethics,” the Animal Welfare Iceland vice chair Rosa Lif Darradottir told AFP. “To make a fertility drug that is used on farm animals… to enhance their fertility beyond their natural capacity, just so that we can have a stable flow of cheap meat… The cause is not noble,” she said.

Opponents also criticised the amount of blood collected. “It’s purely and simply maltreatment of animals and we have a word for that: animal cruelty,” said opposition MP Inga Saeland, who has repeatedly proposed a ban on the practice, to no avail.