Action, boredom, protests and celebration inside the NBA ‘bubble’

Three months later, LeBron James was spraying him in the face with water. Golliver’s tweet of that video won attention, too. It capped a narrative about how, in the thick of the coronavirus crisis, the NBA had resumed its halted season, staged its playoffs and crowned the Los Angeles Lakers as champions. While managing this public health feat, the league confronted a challenge from the players themselves, who were leading charges for racial justice.

Golliver’s book, Bubbleball: Inside the NBA’s Fight to Save a Season, chronicles this special moment in American sports history. It is an entertaining account of the NBA’s ambitious experiment, featuring perceptive analysis of how the bubble tested the culture of each title contender. It also offers empathetic portraits of the athletes who used their platforms to protest that Black lives matter. Yet it may leave the reader wanting more than the author can provide.

Golliver often sprinkles in personal stories to explain his perspective. He comes across as a likable hoops junkie. “Basketball was one of the few things that made me happy and fulfilled,” he wrote, while relating his despair over the league’s shutdown in March 2020. “I never dreamed about retirement; I always dreamed about being the oldest guy in the press box.”

Despite a history of heart ailments, he applied for one of the few available media credentials on the tightly regulated Disney campus. He embraced a routine: taking daily coronavirus tests, working alone in his room, eating pre-assembled meals, wearing a band that tracked his whereabouts, walking the same 1.5-mile loop, heading to the arena, writing more stories. 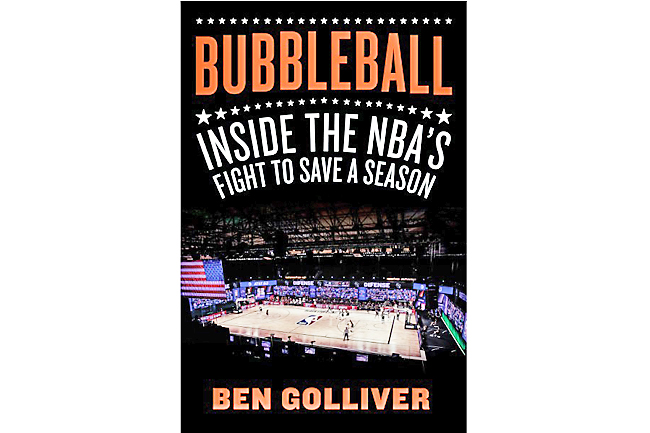 The health protocols separated the living areas for the media from the players, but journalists did get up-close-and-personal access to the world’s best basketball, on courts staged for television audiences, with only a few hundred other people in the building. A live reporter heard every play call, every incredulous objection to a ref, every exuberant spurt of trash talk. Without crowds, the experience was both eerie and intimate.

Golliver consistently illustrates how the unique conditions forged a crucible for team chemistry. “Living in the bubble was a chore, and playing in empty gyms was a constant test of a team’s internal motivation,” he wrote. “If players weren’t on the same page or if they weren’t fully bought into the experience, the cracks were bound to show. A team couldn’t hide its warts in an empty gym.”

The Philadelphia 76ers ended their season in frustration, failing to incorporate the disparate talents of stars Ben Simmons and Joel Embiid. The Houston Rockets collapsed after forward Danuel House violated health protocols with an unauthorised visitor to his hotel room. The Los Angeles Clippers had two new centrepieces in Kawhi Leonard and Paul George, but they lacked cohesion and purpose, reinforcing the team’s reputation for shrinking in big moments.

But the bubble also revealed the athletes and teams of exceptional character. Damian Lillard lifted up the Portland Trail Blazers, and Jamal Murray did the same for the Denver Nuggets. The Miami Heat reached the NBA Finals thanks to their ethos of sacrifice and toughness, embodied by the remarkable Jimmy Butler. The Lakers won the championship not only because of their transcendent duo of LeBron James and Anthony Davis, but also because James fostered a culture of camaraderie.

“Some people are built for this moment, and some people aren’t,” proclaimed James after one victory. With close observation and basketball expertise, Golliver keeps proving this point.

The 2019-2020 NBA season also occurred during a year of surging racial protest, in a league dominated by politically conscious Black athletes. In the early summer of 2020, as officials planned to resume the season in Orlando, players joined the nationwide protests in the wake of George Floyd’s murder. Then, in the bubble, they used media interviews to focus on racial injustice. “You might feel for us,” James told some White reporters, “but you can never really, truly understand what it means to be Black in America.”

In late August, after the police shooting of Jacob Blake in Kenosha, Wis, the Milwaukee Bucks refused to take the court for their playoff game against the Orlando Magic. It would become a historic moment, sparking cancellations across the world of sports, concessions from NBA team owners and frayed nerves among the players.

Golliver described the tense, anguished atmosphere after the Bucks’ boycott. He immerses readers in the moment, and he displays compassion for the athletes. But his vantage point is from outside the locker room. He cannot describe details of how the players debated the path forward, just as he cannot delve into their personal journeys amid the stresses of 2020.

Here is the irony of Bubbleball: The NBA put athletes and writers in constant proximity, but coronavirus regulations limited their interactions to formal news conferences. Whether the topic was playoff battles or social justice, reporters had to keep their distance. Golliver has contributed an essential record of pro basketball’s most unusual season, but it feels like the best stories about the NBA bubble are still to come.