THE WASHINGTON POST – Charlotte Cho first came face to face with pimple patches while working in Seoul more than a decade ago.

The Korean American entrepreneur, who was an international corporate communications manager for Samsung at the time, was fascinated to see co-workers dressed in suits and heels arrive at work and attend important meetings with little round stickers on their faces. “It was very common for both men and women to have these clear hydrocolloid patches on their skin to treat a blemish or after a laser treatment,” Cho recalled. (Hydrocolloids are thin, film-like dressings.)

Cho tried and was impressed with the patches. “They were inexpensive, gentle treatments that actually gave me noticeable results for my acne – within eight hours my pimples were smaller and starting to heal,” she said. “It also kept my mind and fingers off of (the pimple), because the clear patch covered it up in a discreet way.”

So, in 2012 when she co-founded Soko Glam, a skin-care platform for Korean beauty products, Cho featured pimple patches by K-beauty brand Missha, which a few years earlier had become one of the first companies to bring the patches out of dermatology offices and to the masses. They became an instant bestseller among Americans because “there was not anything else really like it in the United States (US) market,” she said.

After pimple patches started getting attention on US social media, around 2015, Cho added versions of the patches from other K-Beauty brands. And in 2020, Soko Glam introduced the Klog Soft Shield Pimple Patches, its own hydrocolloid pimple treatments, which Cho said have been a bestseller since the launch. 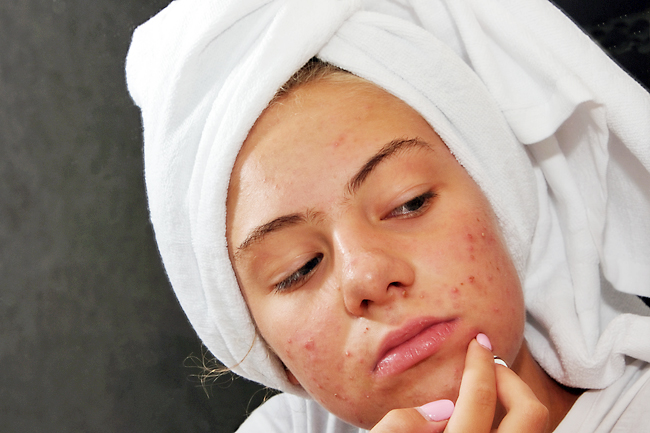 Today, a quick search for #pimplepatch on TikTok will take you down a rabbit hole of grotesquely satisfying videos of Gen Zers peeling back pus-filled pimple patches (also known as zit stickers) ranging in design from small clear circles to yellow stars and bedazzled flowers – all made from hydrocolloid.

The US beauty industry “has tapped into the innovations coming out of Korea in terms of formulation and cosmetic procedures”, said former brand strategist and current founder and Editor in Chief of trade publication BeautyMatter Kelly Kovack. (Cho noted, however, that if you look on the box of most Western pimple patches, they are actually manufactured in Korea.)

Co-founder of trend intelligence platform Spate Yarden Horwitz said hydrocolloid patches and pimple patches have both been experiencing strong growth in online US searches this past year, with 36,600 average monthly searches for the former, and 97,600 monthly searches for the latter. According to a representative from Trendalytics, a predictive data and retail analytics platform, social posts mentioning pimple patches are up 93 per cent over last year.

Originally patented in 1967, hydrocolloids have been widely used since the 70s to dress wounds, especially venous leg ulcers. Made from gelatin, pectin, carboxymethyl cellulose, other polymers and adhesives, they work by absorbing pus and creating a gel-like cover over the wound bed, which keeps the injury moist and shields it from infection.

They work similarly on acne. “The fact that we can draw the pus out of a pimple in a matter of hours and prevent scratching and picking by covering the wound, makes pimple patches a valuable over-the-counter acne treatment,” said dermatologist based in Perrysburg, Ohio Hope Mitchell.

Early iterations of pimple patches were made just of hydrocolloids and designed simply to draw out the pus from pimples in the whitehead stage, leaving the blemishes less red and inflamed. Now, pimple patches are manufactured in a variety of forms to use on different kinds of acne and stages of pimples, though experts said they should not be used on cystic acne.

There are patches from Zitsticka to treat early-stage pimples that include micro-darts constructed of salicylic acid (a chemical exfoliant that helps unclog the pore), niacinamide (also known as vitamin B5, an antioxidant that calms inflammation) and hyaluronic acid to keep the pimple site hydrated.

There are patches from Hero that are designed to prevent post-pimple hyperpigmentation with micro-points made up of niacinamide (which studies have shown aids in reducing hyperpigmentation and preventing further damage) and tranexamic acid (which brightens and lightens the pigmented skin). And, there are larger hydrocolloid pimple patches from Rael to cover “surface hot spots” – such as the chin or forehead.

Brands such as Starface and Squish are going beyond just treating the pimple by promoting skin positivity with pimple patches in the shapes of stars and bedazzled flowers. These brands are normalising breakouts and “making it cool to have acne”, said New York-based dermatologist and Director of cosmetic and clinical research in dermatology at Mount Sinai Hospital Josh Zeichner.

“Like many trends in beauty at the moment, I think the popularity of pimple patches had been driven by Gen Z and brands that have tapped into what makes this generation tick,” Kovacks said. “These brands have reframed the language of the acne category, which historically has been grounded in shame.”

Beyond their popularity on TikTok, pimple patches may be having a moment because people who use masks have been experiencing more frequent outbreaks, or “maskne” during the pandemic. Emergency medicine physician Chao A Yuan at Marin Health, a hospital in the San Francisco Bay area, said hydrocolloid bandages have become helpful for front-line staff in the emergency department who wear N95 masks for eight hours straight. “I’ve used them on the bridge of the nose to prevent pressure sores and further infection of acne spots.”

Dermatologists find them useful, as well. “I am a big fan of these pimple patches from a practical standpoint, when they’re used alongside traditional acne treatments like benzoyl peroxide, topical retinoids and other prescription options, which are a mainstay of treatment,” said Zeichner, who especially finds them useful as targetted treatments for red, angry pimples. (He also noted that people don’t have to stick to patches marketted to treat acne. In a hack that’s all over TikTok, he said, people are cutting up less-expensive Band-Aid brand hydrogel patches and applying them to their pimples, which also works.)

Dermatologist based in Cambridge, Massachusetts, Ranella Hirsch, advised patients to apply pimple patches to clean, dry skin and to not add anything additional to the patches.

Hirsch said if you are wearing the patch during waking hours and you see the pad turn white and thicken (after approximately six to 12 hours), “it suggests that the material has extruded”. Otherwise, Hirsch added, she told people to wear them overnight, but “12 hours max, because you don’t want the adhesive to irritate the skin”.

Hirsch recommended using plain hydrocolloid patches (which she said are safe for any age, when not overused) for pimples that are in the whitehead stage and patches with the tiny spikes of medication for “painful, deeper pimples that are coming in”.

One concern was raised by Mitchell, who warned that flat warts can look like acne and would worsen if treated with a pimple patch. “If you put a pimple patch on top of warts, you are providing a moist environment, which can cause more warts to crop up,” she said.

“If you have these all over your face or on your trunk and you’re not sure of the diagnosis, or, if they are still persisting, it’s time to see a dermatologist.”

Otherwise, the dermatologists we spoke to were generally in favour of the patches.

“I think that when pimple patches first hit the market they were met with a lot of scepticism,” Zeichner said. “But it’s clear that they are here to stay and do have therapeutic benefits.”