About the very act of watching

THE WASHINGTON POST – If the idea of a movie about two men perched on a cold mountain ridge in Tibet, hoping to catch a glimpse of an elusive snow leopard – and, at least for much of the film, failing to do so – sounds appealing, then consider The Velvet Queen.

There I go, making this “nature documentary” (one that never needs air quotes around it more desperately) sound boring. I apologise: Even if the idea of this film does not appeal to you, please consider it anyway.

With the original idea and co-direction credited to French nature photographer Vincent Munier, who is one of the two men (the one with the camera and the massive zoom lens), The Velvet Queen – beautiful, strange and without category – could be said to be about the very act of watching/looking. Munier’s co-director Marie Amiguet, whom we never see, but who is the one with the other camera (the one making the movie), is, in other words, watching the watchers.

French travel writer Sylvain Tesson is Munier’s companion: the one with the notebook and many of the film’s big ideas, which include patience, waiting and modern man’s detachment from nature, despite our so-called dominion over it.

“The Earth reeks of humans,” said Tesson, a wry Boswell to Munier’s Johnson, explaining why it’s so hard to find their feline “grail.” (And yet, as Munier notes of our species, “We’re not animal anymore.”) 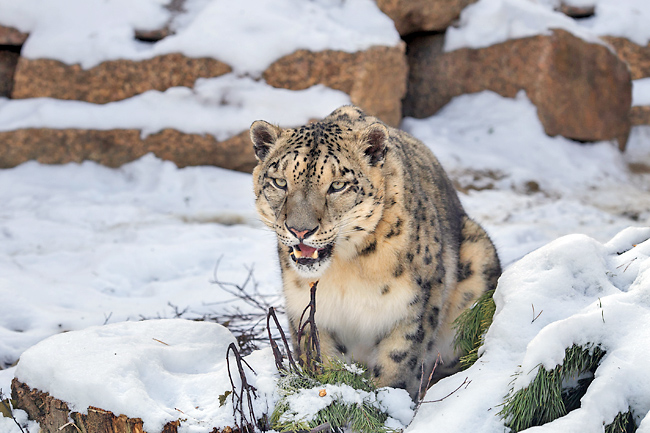 There’s plenty to look at while we’re waiting for the titular Queen, and it’s often quite pretty: Shots of rabbits, sheep, deer, yaks, foxes, pikas, bears, other big cats and a miscellaneous assortment of birds abound. But this is not your typical Animal Planet or National Geographic film.

There is not voice-over about how the leopard is classified as “vulnerable” by the International Union for the Conservation of Nature, and very little information about its behaviour or the state of its environment. Rather, this is a film that is less about its ostensible subject than it is about us.

At one point, Munier tells a story about an earlier vigil to spot a snow leopard, during which he took a photograph of a falcon. It was only months later, he said, when going through his pictures, that he found an image of the leopard in the background of the falcon shot, peering at him from behind a rock.

We are, then, the film’s true subjects, and what’s being scrutinised most closely here is the way we conduct our lives on this planet. Not whether we recycle or donate to conservation organisations, but how we live, how we hold ourselves, from moment to moment, in the stillness, the vastness, the wonder and, for lack of a better word, the boredom.

At the end of the film, Tesson, reading from his notes – which form both a kind of found verse and practical words to live be – neatly sums up the message(s) of the movie thus:

Revere what is in front of us.
Hope for nothing.
Delight in what comes up.
Have faith in poetry.
Be content with the world.
Fight for it to remain.

In French and Tibetan with subtitles. 92 minutes.