KHAIRPUR, PAKISTAN (AP) – Like every year, Arz Mohammed had planted his little patch of land in southern Pakistan with cotton. The crop would earn him enough so that, as he puts it, his family of five wouldn’t be reduced to begging. Then came the deluge.

Pakistan’s massive floods this summer collapsed Mohammed’s home and destroyed his four acres of cotton, wiping out most of his income.

On top of that, his land and that of his neighbours remain underwater, three months after the heaviest rains stopped. Like many farmers across southern Pakistan, he may not be able to plant his next crop – wheat – in time.

That could spell trouble for the country’s food supply.

“These rains have destroyed everything for us,” said Mohammed, who lives in a tent with his wife and children near his wrecked house in Khairpur, one of the country’s hardest-hit districts. “We don’t even have anything to eat.”

Farmers and officials warn that Pakistan could now face serious food shortages at a time when the government is strapped for cash and world food prices are high. 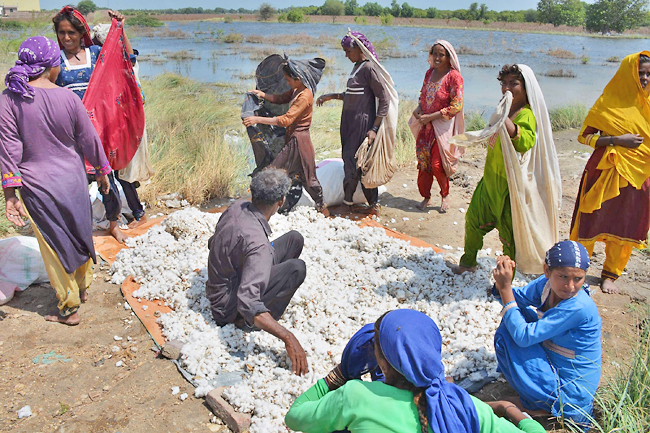 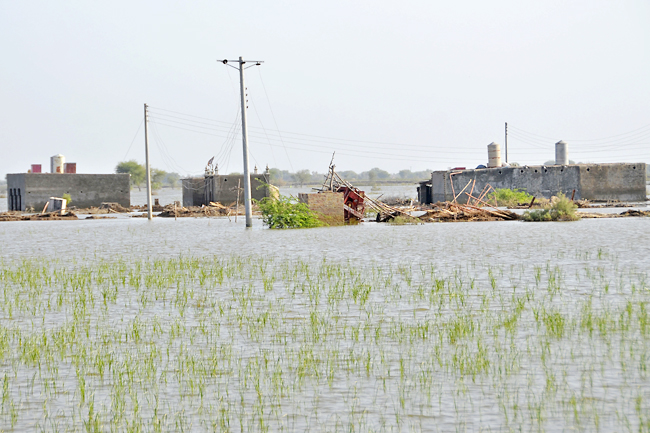 Nearly 15 per cent of Pakistan’s rice crop and 40 per cent of its cotton crop were lost, according to officials. The waters also wiped out the personal grain stores that many farming families rely on for food yearlong.

At the United Nations (UN) last week, Prime Minister Shahbaz Sharif told The Associated Press (AP) that crops on four million acres were washed away. “We need funds to provide livelihood to our people. We need funds to compensate for the loss of crops to our people, to our farmers.”

The government said there is no immediate worry about food supplies. In a statement to the AP, the state disaster agency said wheat stock are enough to last through the next harvest and that the government is importing more.

However, the upcoming wheat crop has been thrown into uncertainty. Planting usually starts in October.

In Punjab province, the country’s main wheat producer, fields suffered less damage and can be sown in time. But in southern Sindh province, the second largest producer, some 50 per cent of the fields remain underwater, according to Provincial Irrigation Minister in Sindh Jam Khan Shoro.

Aerial footage in Sindh shows field after field still inundated. The province, in Pakistan’s southern lowlands at the downstream end of its major rivers, is where the floods hit hardest: 80 per cent of the rice crop and 70 per cent of cotton were destroyed, devastating the livelihoods of the small farmers who make up most the production.

Altaf Hussain Marri, a larger and relatively well-off landholder in Khairpur, said he normally gives away wheat as a gift to friends and family. Now he’s worried about having enough for himself and his children, unsure if his 400 inundated acres will drain in time. The floods demolished his cotton and rice crops, worth around USD40,000.

“If we fail to grow wheat… next year we might not have even wheat to eat,” Marri said. “It will create food insecurity in the country. The poor will suffer a lot. There will be no flour.”

Pakistan’s agricultural sector had been growing in recent years, allowing the country to export some wheat and rice.

“Now we will have to import wheat and other food items,” Pakistan’s Planning Minister Ahsan Iqbal told the AP. Sharif, the prime minister, said Pakistan may have to import about a million metric tonnes of wheat, and it could come from Russia, but Pakistan is open to other offers if the price is right.

Pakistan has already put out orders to import 500,000 metric tonnes of wheat, Planning Ministry officials said. There are contingency plans to buy as much 2.5 million tonnes over the next year, but officials are waiting to see how much wheat is planted, they said, speaking on condition of anonymity because the policy was not yet set.

Senior economist Ashfaq Ahmad said the additional wheat needs to be brought in quickly, by next month.

Otherwise, “I am seeing a food crisis in December,” he told the AP. “Any delay in the import of wheat will cause food shortage.”

The flooding was also a blow to Pakistan’s important cash crops. Losses will mean lower exports of rice, which earned USD2 billion in 2020. Cotton losses could hurt the country’s biggest export, textiles and clothes, which brought in more than USD20 billion annually in recent years.

But the greater damage and danger is likely to Pakistan’s poor, with no margin to endure losses in income and food.

In Dasht, a remote district of Baluchistan province, hundreds of orchard owners worry about their future after losing crops of grapes, apples and other fruits. In parts of Baluchistan, piles upon piles of rotten apples can be seen in submerged areas.

Even before the floods, some 38 million Pakistanis, more than 16 per cent of the population, were living in moderate or severe food insecurity, meaning they were uncertain about being able to obtain food or at times have outright gone without eating, according to the World Health Organization.

Nearly 18 per cent of children were acutely malnourished.

The blow to the food supply and incomes will tip those populations deeper into hunger, UN agencies have warned.

The UN’s World Food Program has so far delivered food to 600,000 flood survivors. Iqbal, the planning minister, said Sindh province is the country’s biggest producer of vegetables for domestic markets. Those crops were lost, along with families’ personal stores of grains for themselves and feed for their livestock.

“So, therefore we have a real food security challenge at hand,” he said.

On the ground in Sukkur, another hard-hit district neighbouring Khairpur, local agricultural director Rasool Bux Junejo fears the worst. Farmers won’t be able to grow wheat or other key crops like sunflowers and mustard.

“That will be a huge loss in the coming months. If you ask me as an agriculture worker, I foresee famine, God forbid,” he said. “We will be unable to provide food to our people.”