THE WASHINGTON POST – On a winter night in 1926, a young Agatha Christie put her daughter to bed, told the maid she was going for a drive and vanished.

The next day her car was found with its wheels overhanging the edge of a cliff. The story became a sensation: Was it an accident? Suicide? Possibly even murder? Jonah Lehrer launches his latest book with this intriguing account from the famous writer’s past (she was found alive more than a week later) and, in so doing, effectively dramatizes the question he intends to answer: Why does mystery create a mental itch that must be scratched?

One might shrug off the question as obvious. Of course we are tantalised by the unknown; it is a truth so basic in our makeup as human beings that it hardly seems worth investigating.

But in Mystery: A Seduction, a Strategy, a Solution, Lehrer goes beyond the obvious to examine the psychological and scientific underpinnings of our responses to the mysterious.

He pursues his quest far and wide, through explorations of literature, movies, music, and sports, to name just a few of his forays. 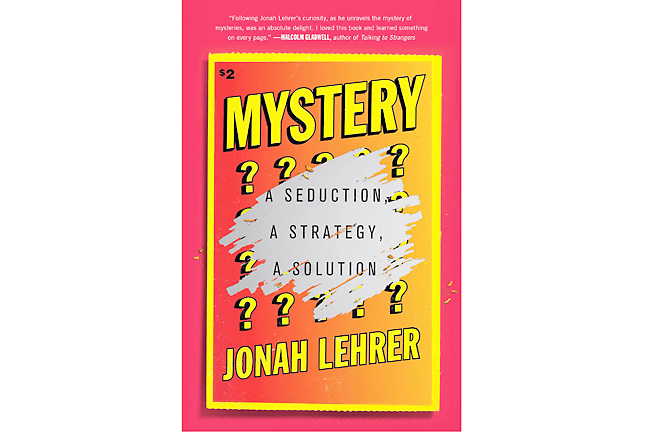 It is a mammoth task that demands careful, exhaustive research – a demand made more critical by Lehrer’s past troubles.

Two of his previous books were pulled from circulation because he was caught recycling old material, plagiarising, inventing quotes and cherry-picking his facts.

He began his last book, about love, with an acknowledgment of those past sins. His 14-page section of notes for Mystery would seem to indicate that he has been diligent in his investigations and fact-checking.

Lehrer begins with a discussion of what he calls the “mystery box”, which stirs curiosity by hiding some crucial piece of information. Edgar Allan Poe perfected this technique when he began writing detective fiction with his short story The Murders in the Rue Morgue.

Poe realised that readers weren’t actually interested in the murder itself but in the mystery of “whodunit”.

The information that is withheld is what holds our attention. Lehrer also mentions the movie Jaws which doesn’t fully show us the great white until 80 minutes in.

Though the delay was partly because of mechanical difficulties with the robotic fish used in filming, director Steven Spielberg used the malfunctions to his advantage, realizing that it is what we cannot see that is most terrifying.

Mystery can also be created by subverting our expectations.

Lehrer contends that art or literature or advertising that isn’t easily decoded, that doesn’t make immediate sense, will prove more intriguing and more likely to endure.

Especially enjoyable is his discussion of the famous mid-century VW Beetle ad with its simple headline: “Lemon”.

It is the confusion upon seeing that headline, the puzzlement of why a carmaker would seemingly advertise its product as a dud, that causes people to pay attention.

The ad was a success because people didn’t turn the page. They were mystified and so they looked harder to read the ad copy that touted Volkswagen’s exacting standards, promising that buyers would not get saddled with a lemon.

Any English teacher or fan of Shakespeare will be interested in Lehrer’s discussion of the inexplicability of the character of Hamlet.

We aren’t drawn to the moody Dane because of what we understand so much as what we cannot figure out. So, too, the character of Tony Soprano. After all, who expects a gangster who is also a loving father and a therapy patient? It is what confounds about characters like these that holds our interest.

What proves most captivating in “Mystery” will surely be driven by a given reader’s interests, and indeed, the book lends itself to skimming and sampling.

I found myself most drawn to discussions of literature and entertainment and less so to those on sports.

But certainly there will be sports fans who prefer Lehrer’s examination of how the rules of baseball were changed to create more mystery in a game that had become too predictable create a “tantalising state of mystery” that keeps people playing.

Lehrer also turns his attention to education, but his argument here seems too narrowly focused. He sets out to show how students make great academic gains when they are taught using a strategy that puts the onus on them to figure out what they need to learn, to explore problems and to develop their own questions to pursue knowledge – in essence, to embrace mystery instead of simply being spoon-fed information.

An entire chapter focuses on one charter school system, the Noble Network, with a reputation for turning out high-performing students.

Lehrer shrugs off criticism the schools have received for their controversial disciplinary measures by saying that the Noble Network was named the best charter school system in America by the Broad Foundation – a foundation that is a major donor to charter schools.

Lehrer does not mention that Michael Milkie, the Noble Network’s founder, recently resigned because of a pattern of “inappropriate behavior with alumni” or that Noble kicked off last school year with a virtual town hall in which leaders apologised for past actions that they said hurt Black students, including punitive discipline policies.

To hold up this charter school system as a model of what is possible in education – not looking at any other schools – seems problematic.

Lehrer offers glimpses into the power of mystery in the creative process. The desire for enhanced mystery was behind a new kind of horror movie, The Blair Witch Project. Lehrer recounts that in the early 1990s, a student at the University of Florida film school complained to friends that horror movies weren’t terribly scary anymore.

They were bloodier and gorier than ever, but too predictable. The students decided to produce a film that heightened the reality and suspense of horror: They created “a fiction that felt real” by filming in documentary fashion with jumpy handheld cameras and ad-libbed dialogue.

Taken one at a time, each of Lehrer’s stories is entertaining, but by the end of the book, they doesn’t necessarily hang together in a cohesive argument. It’s a bit like making a dinner from a tray of assorted hors d’oeuvres.

Most of them are tasty, but they don’t really add up to a full meal.