A storm of questions

NORTH PORT, FLORIDA (AP) – Christine Barrett was inside her family’s North Port home during Hurricane Ian when one of her children started yelling that water was coming up from the shower. Then it started coming in from outside the house.

Eventually the family was forced to climb on top of their kitchen cabinets – they put water wings on their one-year-old – and were rescued the next day by boat.

After the floodwaters had finally gone down Barrett and her family were cleaning out the damp and muddy house.

On the front lawn lay chairs, a dresser, couch cushions, flooring planks and a pile of damp drywall. Similar scenes played out across the block as residents tried to clear out the soggy mess before mould set in.

North Port is about five miles inland and the Barretts – like many of its residents – live in areas where flood insurance isn’t required and therefore, don’t have it. Now many wonder how they’ll afford much-needed repairs.

“Nobody in this neighbourhood has flood insurance because we are a non-flooding area,” she said. “But we got 14 inches of water.” 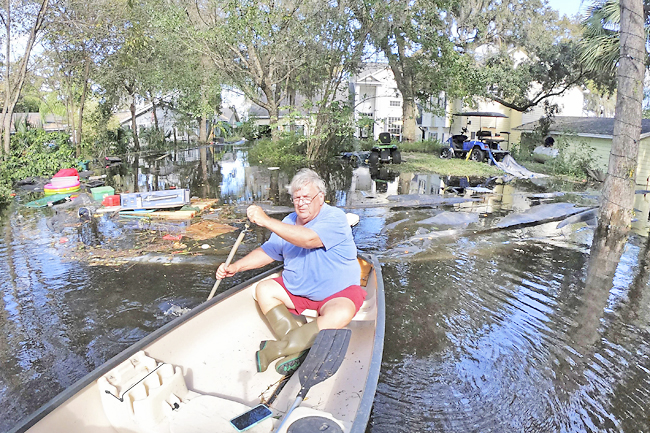 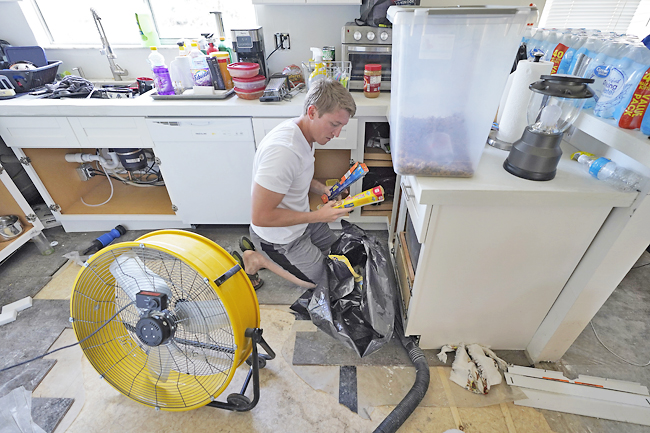 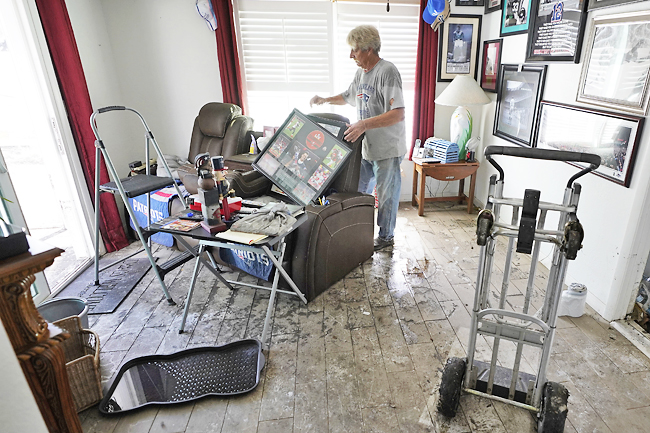 Ian dumped rain for hours as it lumbered across the state, sending waterways spilling over their banks and into homes and businesses far inland from where Ian made landfall. People were using kayaks to evacuate their flooded homes, and floodwaters in some areas have still not gone down a week after landfall.

“This is such a big storm, brought so much water, that you’re having basically what’s been a 500-year flood event,” said Florida Governor Ron DeSantis.

But flooding is not covered by a homeowner’s insurance policy.

It must be purchased separately – usually from the federal government. Although most people have the option of purchasing flood insurance, it is required only on government-backed mortgages that sit in areas that the Federal Emergency Management Agency (FEMA) deems highest risk.

Many banks require it in high-risk zones, too. But some homeowners who pay off their mortgage drop their flood insurance once it’s not required. Or if they purchase a house or mobile home with cash they may not opt for it at all.

And flooding can and does happen outside those high risk areas where flood insurance is required.

There have long been concerns that not enough people have flood insurance especially at a time when climate change is making strong hurricanes even stronger and making storms wetter, slower and more prone to intensifying rapidly.

According to the Insurance Information Institute, only about four per cent of homeowners nationwide have flood insurance although 90 per cent of catastrophes in the United States (US) involve flooding. In Florida that number is only about 18 per cent.

“We have experienced catastrophic flood events across the US this year, including in Kentucky and Missouri, where virtually no one had flood insurance,” said the Institute’s Mark Friedlander.

Hurricane Ian caused extensive flooding in areas outside of the high-risk zones.

The old system considered a home’s elevation and whether it was in a high-risk flood zone.

Risk Rating 2.0 looks at the risk that an individual property will flood, considering factors like its distance to water.

The new pricing system raises rates for about three-quarters of policyholders and offers price decreases for the first time.

FEMA has long said the new ratings would attract new policyholders. However, a FEMA report to the treasury secretary and a handful of congressional leaders last year said far fewer people would buy flood insurance as prices rise.

Since the new rating system has gone into effect in Florida, the number of polices in the state has dropped by roughly 50,000 since August 2021. After a federally declared disaster, homeowners with flood insurance are likely to receive more money, more quickly, to recover and rebuild than the uninsured.

After major flooding in Louisiana in 2016, for example, the average payment to a flood insurance policyholder was USD86,500, according to FEMA. Uninsured homeowners could get individual assistance payments for needs like temporary housing and property damage, but they averaged roughly USD9,150.

Congress sometimes provides additional aid after major disasters although that can take months to years to arrive.

“Unless you have flood insurance, the federal government is not going to give you enough assistance to rebuild your home,” said Natural Resources Defence Council’s Water and Climate Team Director Rob Moore.

In the North Port neighbourhood that was cleaning up from Ian, Ron Audette wasn’t sure whether he would get flood insurance going forward because of the cost.

The retired sailor was cleaning up his one-story home on a corner lot after floodwaters buckled the laminate flooring, swelled wood furniture and left the leather reclining sofa where he watched Patriots games a watery mess.

Down the street, his neighbour Barrett was definitely planning to get it. “Get flood insurance even if it’s not required,” she advised. “Because we definitely will now.”