Claire Messud sparked the ‘likability’ debate in 2013 when she gave an interview to Publishers Weekly about her then new novel, The Woman Upstairs.

When the interviewer said of Messud’s protagonist, Nora Eldridge, that, “I wouldn’t want to be friends with Nora, would you? Her outlook is almost unbearably grim,” Messud responded with a rat-a-tat roll call of some of literature’s most unpleasant characters:
“For heaven’s sake, what kind of question is that? Would you want to be friends with Humbert Humbert? Would you want to be friends with Mickey Sabbath? Saleem Sinai? Hamlet? Krapp? Oedipus? Oscar Wao? Antigone? Raskolnikov? … Any of the characters in anything Pynchon has ever written? Or Martin Amis? Or Orhan Pamuk? Or Alice Munro, for that matter? If you’re reading to find friends, you’re in deep trouble.”

The battle lines were then drawn between those who sneered at the naivete of readers who count fictional characters among their ‘friends’, and others who insisted that such sneering was elitist. As with so many literary controversies, this one exhausted itself without a decisive win.

I resurrect the debate to caution that, if you’re the type who looks for friends in the books you read, you’d best avoid Paula Hawkins’ new suspense novel, A Slow Fire Burning. In fact, even if you’re a misanthrope, you’d best avoid it. Not only is every character in Hawkins’ novel vile, self-serving, and narcissistic, even worse, they’re dull. Dull, dull, dull. 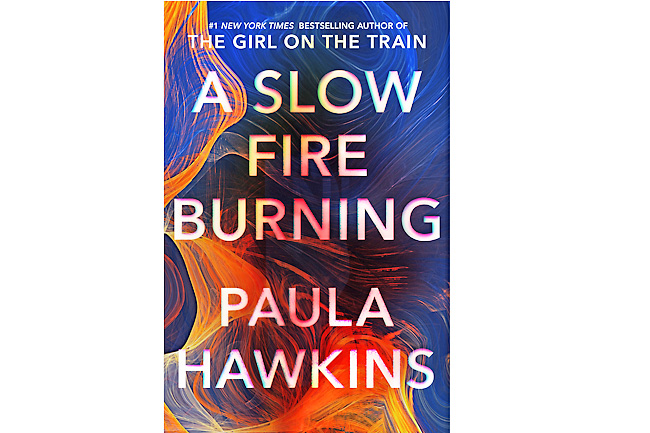 Even the serial killer is dull. Say what you will about Hannibal Lecter, but up until the dinner hour, he’d be an entertaining companion, even someone you might consider a ‘friend’.

As in her earlier novels, including the 2015 blockbuster, The Girl on a Train, Hawkins relies on a zigzag storytelling style where we readers hear multiple perspectives on the same events courtesy of a third-person narrator who has access to the thoughts of different characters.

Here, those events constitute a murky tale of betrayal, murder, deviant behaviour, sordid family interactions and the appropriation of someone else’s story by a craven writer looking to make a buck. (Appropriation is the signature suspense theme of 2021; it’s hard to recall another time when the “purloined story” subplot was such a thing.)

A Slow Fire Burning begins with the grisly stabbing murder of a (dull and vile) young man named Daniel Sutherland on his dilapidated houseboat moored on Regent’s Canal in London.

Three women relate the events preceding and following the crime.

The first is a snoop named Miriam Lewis, who lives on an adjacent houseboat.

Miriam’s chapter begins with this up-close-and-personal description: “Every second Sunday, Miriam Lewis cleaned out the toilet. She had to lift the (always surprisingly, unpleasantly heavy) cassette out of the little toilet at the back of the boat, carry it through the cabin and out onto the towpath, and from there… to the loo block, where the waste had to be tipped out into the main toilet and flushed away.”

A tad too granular, perhaps, but Miriam’s introduction explains why she notices that the cabin doors of the neighbouring houseboat are open on a cold morning and, hence, discovers the corpse. Lest we think Miriam is an upright citizen, we’re also told that she nicked a key ring “still sticky with blood” next to Daniel’s body and withheld it from the police. Not very nice of Miriam.

The victim’s aunt, Carla Myerson, is a frosty, resentful woman, but as it turns out she has good reasons for her emotional stinginess.

Carla’s estranged husband, the pompous novelist Theo Myerson, turns out to have unsavory ties to Miriam. Theo also supplies the police with the interesting tidbit that he saw a girl, covered in blood, walking on the towpath during the time period when the murder had been committed.

That girl, named Laura Kilbride but cruelly called ‘Mad Laura’, is the third woman personally caught up in this dense tale. Laura works at a launderette and suffers, by her own account, from “low self worth… poor impulse control, inappropriate social behaviour, aggressive outbursts, short-term memory lapses, and quite a pronounced limp”, (I’d toss in the sins of envy and covetousness). It’s Laura’s bloody key ring that conniving Miriam steals from the scene of the crime.

Certainly James M Cain’s crime noirs weren’t packed with amiable people and cheery settings, but it’s the very operatic obsessiveness of his corrupt characters, the intensity of his dead-end settings and over-the-top dialogue that make masterpieces like Double Indemnity and The Postman Always Rings Twice irresistible.

Hawkins’ novel, in contrast, offers little incentive for a reader to stay involved. Her bland rogues gallery of characters – major and minor – attests, once again, to “the banality of evil”.

And, with the exception of a clever plot twist at the very end of this novel, its revelations don’t merit its ornate complications. The “fire” that’s burning in Hawkins’ title isn’t the only thing about her latest novel that’s slow.