THE WASHINGTON POST – David O Stewart tells us that early American society was “Washingtonian” more than Jeffersonian or Hamiltonian. It is an interesting and provocative plot device, especially when one realises that in leaning on others to write meaningful pronouncements for him, George Washington never aimed so high as to want the adjectival “-ian” after his name.

According to Stewart, a former trial lawyer and a historical novelist, the Constitutional Convention transformed the Virginian into a “working politician” whose essentially conservative values led him to desire, as president, a “‘respectable’ government that could tax and govern” without roiling disgruntled citizens.

Long cast as “virtue personified,” Stewart’s Washington is the “sober” counterpoint to the “firebrand” Alexander Hamilton. Unlike most founder books, George Washington: The Political Rise of America’s Founding Father contends that the first president was in complete control of the executive, minding every detail. He was, at various moments, the “great unifier,” the “cheerleader president” and a “consummate performer,” doing his all to hold a fracturing nation together.

As a young man with an ambition to achieve public renown, Washington’s height and athleticism marked him.

Growing up fast, guided by his older half brother Lawrence, he became enmeshed in the Ohio Company’s aggressive pursuit of frontier land, which played a role in his choice of soldiering as a means of advancement. 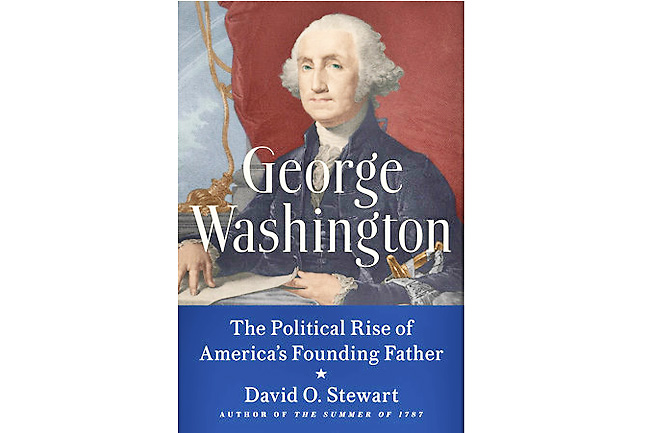 Surviving smallpox, he became a death-defying leader of ungovernable Virginia troops during the French and Indian War, annoyed in being denied a British army commission.

“His inability to pacify the frontier tortured him,” Stewart wrtoe. “Having known mostly failure in uniform, he felt the weight of the world on his shoulders.”

Yet as the author goes on to show, in tracing Washington’s demanding life in the 1750s, he was often “petulant” in communications with his patron, Governor Robert Dinwiddie; more tact would have yielded him more goodwill. In a masterfully drawn chapter, ‘Biting the Hand,’ Stewart details the drama (and theatrics) of that critical relationship.

His extensive coverage of Washington’s early professional experience is fitting, given the many documented lessons amassed from colonial-era relationships. Above all, Washington gained in knowledge of military discipline, “logistics, paperwork, and organisation,” which he’d employ in the Revolutionary War, keeping “his reputation intact” despite battlefield reverses, while many other senior officers ended their careers ignominiously. Yet Washington’s difficult temper never quite receded.

The chapter ‘Man of Business, Master of Slaves’ instructively analyses the planter’s eager pursuit of advanced farming methods. He was a hands-on manager of his Northern Virginia lands: “Washington measured work obsessively, searching for better ways to organise it.” A “devotion to time-and-motion studies” grew his farm output exponentially and helped his revenue stream.

Following recent scholarship, the author underscores Washington’s complete acceptance of the institution of slavery. He resorted to euphemistic language in which beatings were referred to as “correction.” There is no sugarcoating the fact that he regarded human property as “assets.” He told an overseer to exercise requisite civility but to avoid such informality as narrowed social distance between free and enslaved; for “they will grow upon familiarity, in proportion as you will sink in authority.” Whether as military commander or plantation master, Washington employed corporal punishment.