NEW YORK (AP) — It was the eve of the deadliest day of the coronavirus spike that brought New York City to a trembling standstill. They were a handful of people doing what they could in the city’s fight for survival, and their own.

A year ago, AP told the story of a day in the life of a stricken city through the eyes of New Yorkers on the front lines and in quarantine as they faced fear, tragedy, isolation and upheaval.

As the United States’ most populous city turned into its most lethal coronavirus hot spot, some of these New Yorkers saw the virus’ toll up close in an emergency room, an ambulance and a funeral home.

Others were suddenly looking from what felt like far away at the city and the lives they knew — a Broadway actor wondering when the curtain would go up again, a taxi driver and a woman running a local meals-on-wheels programme who contended with the risks and challenges of jobs that were suddenly recognised as essential.

AP recently returned to these New Yorkers to look at a full year of living through the pandemic in a city that has regrouped but not fully recovered. Like New York itself, they’ve endured 12 months framed by grief and fortitude, trauma and new direction, economic and social loss, exhaustion and cautious reawakening — and both worry and hope about the future. 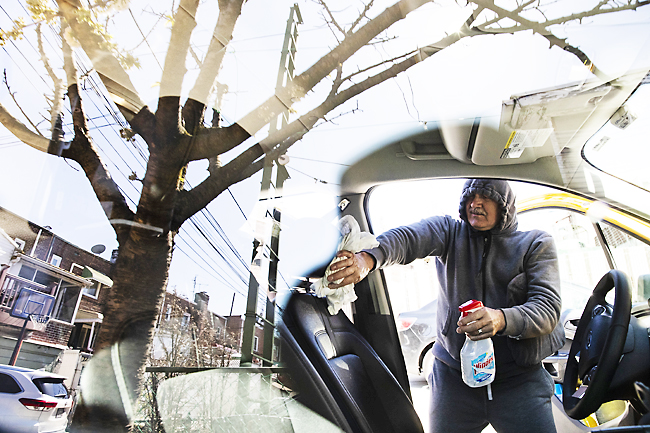 Travis Kessel has begun making plans again: a 30th birthday trip to Walt Disney World, tickets for a rescheduled concert that he hopes will happen this time.

Yet the excitement that something like normal life is returning is tempered by worries about how quickly it could be taken away again. The Fire Department paramedic knows something else could always be lurking.

“For years it was: ‘What’s the next terrorist attack going to be?’ After 9/11, that became the prevailing fear of people, especially Americans, New Yorkers,” Kessel said. “And now, going through something like this — what’s the next virus around the corner? What’s the next pandemic?”

The deluge of 911 calls for medical aid has subsided since peaking in late March 2020 at more than 6,000 a day, compared to 4,000 or fewer normally, and filling Kessel’s days with a stunning volume of critically ill and dead patients. He still starts to choke up when he recalls telling a man that his wife was dead, and the tearful husband saying, “I lost my best friend.”

Now there’s less stress, though not enough less to relax. It haunts Kessel that it’s still not fully understood why the virus spiked as abruptly and severely as it did in New York City, where the daily death toll went from zero to more than 800 in just over three weeks. In all, the city counts more than 30,000 coronavirus deaths.

He lost colleagues including Idris Bey, a fellow EMS instructor who was a rescuer at the World Trade Center and died last April at 60. The FDNY hasn’t been able to gather fully to honour those lost with line-of-duty funerals.

Without diversions such as travel, Kessel said it’s felt like virtually all work for more than a year. His break is finally coming. He and his wife, Meghan, a nurse, will celebrate his birthday at Disney World, where they got engaged.

“It seems to be we’re heading in the right direction,” Kessel said. “There’s going to be hiccups, but at this point, there is light at the end of the tunnel. Whether it’s real or not is yet to be determined.”

Nicolae Hent put it bluntly when he brought his taxi in for service recently. “I have to make a living,” Hent recalled telling the shop. “If you keep my car two weeks, I’ll go bankrupt.” Hent grossed USD73,000 through the meter last year, USD30,000 less than in 2019. With so much of New York City’s workforce staying home and tourists staying away, he could drive for long stretches without finding a fare.

Hent realised by early last April that his best hope was to look for healthcare workers near hospitals. He has some success now in midtown Manhattan but still not downtown in the financial district.

“You can drive an hour, you may not be able to find a passenger around downtown,” Hent said.

Two years from his planned retirement, Hent, 64, has now lengthened his workday, leaving his Queens home around 6am instead of coming into Manhattan in late morning. That still won’t get him back to his pre-pandemic earnings, but he said he’s been able to make all his mortgage payments since May after not paying in March and April.

The ride he longs to take is to Boston to see his daughter and granddaughters for the first time since February 2020. Now fully vaccinated, he’s looking forward to his wife’s second shot in mid-April, so they can go. They saw their other daughter briefly last summer. She and her boyfriend dropped by for a few minutes, but remained outside, on her parents’ 40th anniversary.

A little before 7.30am on a recent morning, delivery workers wove around Carla Brown with insulated bags in hand, readying for another day of distributing hundreds of hot meals to homebound older adults.

Brown ducked into her office, stacked with so many cartons of disposable masks and gloves that she’s given up working inside. It’s one more reminder, she said, that what passes for normal now remains anything but.

“It’s been the longest year of my life,” said Brown, whose meals-on-wheels programME was swamped last spring when New York’s lockdown stranded many of the city’s elderly.

“I think that’s been the struggle for us, is our new normal,” she said, as the Charles A Walburg Multi-Service Organisation tries to plan for what’s to come without knowing quite what that will be.

Meanwhile, the staff shrank because of virus fears, family responsibilities and enhanced unemployment checks. College students and some church and service group members volunteered to help. But as the city revived, many returned to work and school. Recently, a bus company has provided two vans and drivers at no charge. But Brown’s organisation is still short-handed.

Brown, 54, subbed in to drive delivery routes, her workdays stretching to 13 or 14 hours. She’s stepped away from deliveries this spring but still works six-day weeks, and she worries that next year could bring city budget cuts.

The virus has frozen her plans for new initiatives and kept her worried about her parents, both 78. For months, she stood outside their home during visits, before venturing inside with a mask. Both stayed healthy, but Brown hasn’t hugged them in a year. Brown found a release when New York let gyms reopen and she resumed workouts. But she longs for pandemic pressures to ease.

“I’m busy cheerleading and trying to get my staff up and keep them up, and then I say to myself, ‘When is this thing going to be over?’”

Seething through an N95 face mask, Jesus Pujols railed last April about the indignities forced upon New York’s dead. An overnight undertaker, Pujols hardly slept last spring. When he did, it was often in the van he used to transport the deceased.

The 24-year-old works for a Brooklyn funeral home that at one point had nearly 500 people in its care, a backlog unresolved until June. His work weeks stretched past 80 hours, but he struggled most after-hours.

“Sitting in silence, that’s when the hallucinations would come around,” he said. “It got pretty bad.”

Doctors told Pujols he was experiencing hypnagogic hallucinations — a term for imagined perceptions that occur as sleep sets in — and said they were caused by sleep deprivation and trauma.

“No sleeping, working until you’re exhausted, and seeing a lot of nasty, very deplorable things,” he said. “Really, that’s what ended up causing it.”

Therapy helped, and so did religion. Pujols now carries a notepad to combat forgetfulness and wears a watch to aid time management. Family was an outlet, but the pandemic was there, too. When his grandfather died of COVID-19, Pujols insisted on handling the embalming himself.

“I felt like I had to,” he said. Last April, Pujols said he wanted to quit. A year later, he’s glad he didn’t. He was able to support relatives pushed out of work by the pandemic, and he’s found purpose as one of New York’s last responders.

“I feel more proud,” he said, pausing. “And different.” The change is apparent. A year ago, Pujols was bleary-eyed and boiling with rage. Now that he’s rested, he’s calmer, if not entirely at peace.

“I get recognition from the people that I help, but not appreciation from the public, I feel,” he said. “We get left out often in the regular news when it comes to, ‘Oh, thank you for all the essential workers’.”